How the Cardinals Passing Game Will Win You a Fantasy Championship 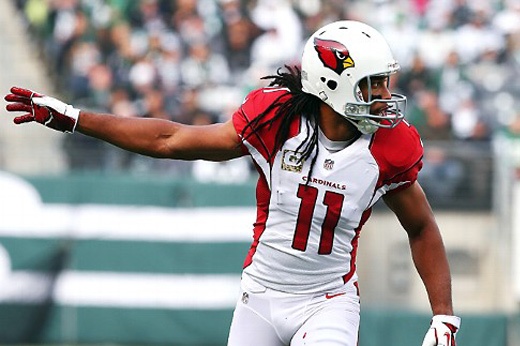 The arrival of HC Bruce Arians is just as critical.  Arians runs an aggressive, pass-friendly offense.  QB Ben Roethlisberger tossed a career-high 32 TDs in Arians’ 1st season in Pittsburgh.  Big Ben also threw for a personal-best 4,328 yards in the system in 2009.

The combination of Arians and Palmer should provide a big-time boost to the Cardinals passing game.

… Assuming the offensive line can hold up.  That’s the biggest concern in Arizona right now.  Cardinals QBs took a league-high 58 sacks last year.  That was the largest single-season total for 1 team since Oakland and Detroit allowed 60+ in 2006. Pro Football Focus ranked the O-line dead-last in pass-blocking efficiency – and it wasn’t even close.

Help arrived this offseason, though.  The Cardinals added Jonathan Cooper in the 1st round of April’s draft.  He’ll immediately step in at LG.  Arizona also added free agent Eric Winston in July.  He's been among PFF's top 26 OTs in 4 straight seasons.

This might not be a stalwart O-line in 2013, but it should improve.  The early returns have been good.  Palmer wasn’t sacked and was pressured just once in 3 series in the preseason opener.

The pieces are in place for this Cardinals aerial attack to take a huge leap forward this season.  I think they’ll finish as a top 10 passing offense.  And if that’s the case, there will be some big-time fantasy value to be had in the desert.

Here’s a look at the 5 key members of Arizona’s passing game that you should be targeting in fantasy drafts.

Palmer throwing for 4,000+ yards in Oakland last year was a minor miracle.  His #1 WR was Denarius Moore.  PFF ranked Moore 73rd among 105 WRs in their overall grades.  TE Brandon Myers emerged as the team’s leading receiver.  He came into 2012 with 32 career catches.  Palmer worked behind an offensive line that finished 23rd in Pro Football Focus' pass-blocking rankings.

Palmer should finish higher in 2013.  He’s getting a big upgrade in pass-catchers.  Larry Fitzgerald is a Hall-of-Fame talent.  Michael Floyd is a burgeoning star.

Even Andre Roberts might be more dependable than any WR Palmer threw to in Oakland.

Palmer also looks like a perfect fit in Arians’ downfield passing attack.  Arians calls Palmer "as pretty a deep-ball thrower as I've ever seen.”  Palmer backed that up by throwing a perfectly placed bomb to Roberts for a 38-yard TD in the preseason opener.

Arians helped Luck to an 8th-place fantasy finish last year.  Roethlisberger was a top-14 fantasy QB in 4 of Arians’ 5 seasons in Pittsburgh.

Palmer is plenty capable of reaching those heights in 2013.  And you can get him near the end of your fantasy draft.  Palmer’s 12-team ADP is sitting in the late 13th round.  He’s an ideal backup and could even be used as half of a QB-by-committee.

Fitzgerald is coming off what he calls “the most disappointing season of my career."  He said he's in "prove-it mode" in 2013.  That added motivation can only help.

Fitz doesn’t necessarily need added motivation, though.  He remains an elite talent in the prime of his career.  He had posted 5 straight 1,000-yard seasons prior to last year.

He should easily hit that mark in 2013.  The massive upgrade at QB alone is enough to get him there.  Palmer has shown the ability to support a fantasy stud.  He helped Chad Johnson to 5 straight top-14 fantasy finishes from 2004 to 2009 (omitting Palmer's lost 2008 season).

And we don’t need to look back too far to see what Arians can do for a WR looking for a bounce-back season.  Indy’s Reggie Wayne managed just 75 catches, 960 yards and 4 TDs in 2011.  Those marks were all 8-year lows.

Arians arrived in Indy and made Wayne the focal point of his offense.  The result was a 106-1,355-5 line – and an 8th-place fantasy finish.

Fitzgerald is a more talented receiver.  He could post even bigger numbers in Arians’ offense.

Fantasy Nation isn’t sleeping on Fitz.  His ADP is sitting in the 3rd round as the 7th WR off the board.  There’s still value there, though.  Fitz is plenty capable of a top 3 fantasy finish.  He’s a prime target late in Round 2 or early in Round 3.

We’ve been touting Floyd since March, when Arians called him a “bright young star.”  Arians has continued to hype the 2nd-year WR.

“I am really happy with him,” Arians said in June. “I see him making leaps and bounds getting better. He’s very serious about what he does. He doesn’t like to make mistakes. He’s totally bought in and if he just continues to improve his fundamentals he’s another guy who can have a breakout year.”

Others have chimed in, too.  Insider Kent Somers notes that Floyd has looked “impressive and more confident” during workouts.  Insider Darren Urban believes Floyd is in for “a pretty big season” and is a “given” to break out.

Floyd capped his rookie campaign with an 8-166-1 line in the season finale.  And that was with Hoyer under center.  With a significant QB upgrade – and a full offseason to refine his game – Floyd could be one of this season’s biggest breakout stars.

The best part is that he can be had in the 10th or 11th round of your draft.  He’s an ideal WR4 who has an excellent chance to produce as a WR3 for your fantasy squad.

Roberts is a guy that even I’d been sleeping on for most of the offseason.  With Floyd’s emergence, Roberts will be the #3 WR in Arizona this year.

That doesn’t necessarily knock him off the fantasy radar, though.  The 3-WR set is the base personnel package in Arians’ offense.  In Indy last year, that resulted in 3 different WRs seeing 88+ targets.  Reggie Wayne finished 2nd among WRs with 195.  Donnie Avery saw 124.  But T.Y. Hilton still garnered a healthy 88 looks.  That ranked 45th among WRs.

Roberts could hit that number in 2013.  And that might be enough to make him a bye-week option for your fantasy team.

Roberts is still an ascending player entering his 4th NFL season.  He’s raised his catch and yardage totals each year, topping out at 64 grabs for 759 yards in 2012.  That was good for a 39th-place fantasy finish.

Roberts might struggle to rank that high in 2013.  But he’ll maintain a significant role in Arizona’s offense.  And if this passing game is as productive as I think it will be, Roberts will boast plenty of weekly upside.  Remember that Hilton was a top 20 WR across fantasy formats over the 2nd half of last season, despite playing only about half of the offensive snaps.

Housler is my favorite late-round TE target.  Heck, I’d feel comfortable pairing him with another late-rounder like Brandon Pettigrew or Fred Davis and rolling with a TE committee.

Housler doesn’t even register in our ADP data.  MyFantasyLeague.com has him coming off the board in Round 14 as the TE20.

He’s a huge value at that price.  Housler turned in an impressive 2012 campaign considering Arizona’s crappy QB play.  His 45 catches tied for 22nd among TEs – ahead of Jared Cook and Vernon Davis.

Housler only averaged 9.3 yards per catch and didn’t score a single TD, but QB play is mostly to blame.  This guy popped off over 16 yards per catch in each of his final 2 college seasons at Florida Atlantic.  He ran a 4.55-second 40-yard dash at 6’5 and 250 pounds.

Housler has the talent to emerge as a big-time weapon for the Cardinals.  GM Steve Keim called him “an emerging star” back in January.  Arians revealed that he considered drafting Housler and turning him into a big WR when he was with the Steelers. "I think the sky is the limit as far as where he can get talent-wise," Arians said during June minicamp.

Insider Darren Urban considers Housler the team's "most obvious" breakout candidate for 2013.  My only argument there is that Floyd might be the better pick.

Housler seems primed to set career highs across the board, though.  The talent is there.  QB help has arrived.  And Arians seems ready to make Housler a significant part of his passing game.

To see just how much we like these guys this season, Draft Sharks Insiders can check out our rankings. 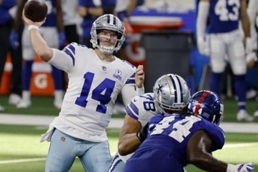 Rams-Falcons presents plenty of obvious fantasy upside. But we'll also be using guys from matchups with shootout potential out west and up north on this DFS slate.

You can find touch volume without spending the big bucks at RB on FanDuel this week.

Wayne Gallman. You in or out? And could WRs from the other side of that matchup unlock serious spending room?

Should we fade or ride Seahawks passing-game components off their big Week 3? What about the Cardinals who let us down next Sunday? Let's discuss that and more to help you build your DFS lineups ...