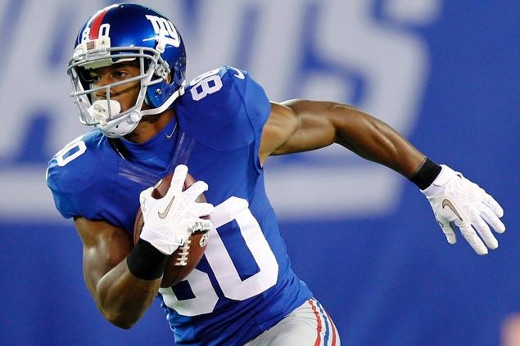 The history of players returning from patellar tendon injuries is ugly. That had Giants WR Victor Cruz going in the double-digit rounds of drafts early in the spring. But the reports on his recovery have been glowing -- and he's now creeping toward Round 9. Cruz climbed almost a full round in ADP during July.

Here’s a look at the biggest risers and fallers in MFL10 ADP in July. MFL10s are PPR-scoring, best-ball leagues. ADP will vary in different league types, but not wildly.

Big Ben climbed more than a half-round in ADP and also went from the 7 th QB off the board to the 6th. (He jumped Cam Newton.) Reports on the Steelers’ passing game have been glowing, especially WR Martavis Bryant. Roethlisberger carries clear top-5 upside this season and is still a fine value at his current mid-7th-round ADP.

Randle climbed from the late 6 th round to the early 5th in June. He spiked into Round 4 by the end of July. Randle’s grip on the starting job has tightened, but he remains a risk/reward pick at his current price.

Martin has shed weight and been deemed “the lead guy” by HC Lovie Smith. That’s bumped his ADP up by a half-round. There are plenty of folks unwilling to bank on Martin after 2 duds, though, so his price has remained reasonable.

Ivory was a screamin’ value in the 9 th round back in early July. He’s still a nice target in the 7th or 8th. RB Stevan Ridley remains on the PUP list, and RB Zac Stacy doesn’t seem like much of a threat to Ivory’s lead role.

Woodhead was available in 12 th round in a couple of months ago. He moved into 10th in June. Now he’s going in the middle of the 9th. Woodhead, unfortunately, is no longer a big bargain.

Helu’s price has climbed, despite a quiet July. Signs point to Latavius Murray being locked in to the lead job, which would leave Helu as a change-of-pace pass-catcher. He’s still a decent value in the 11th round of PPR drafts.

Dunbar wasn’t even drafted in about half of the MFL10 leagues in early July. By the end of the month, he was coming off the board in Round 16 or 17 on average. There’s talk of Dunbar playing a significant pass-catching role, and there’s an opportunity for more carries with DeMarco Murray out of the picture. Dunbar is a fine late-round flier.

Few players were buzzier than Bryant in June. But his July has started with an elbow infection and a #3 spot on the depth chart. We’ll see what that does to his ADP. He needs to drop back into the 6th round for us to be very interested in this boom-or-bust receiver.

Reports on Cruz’s return from last year’s torn patellar tendon continue to be positive. We still need to see him in live game action before recommending him in fantasy drafts, especially at his rising ADP.

Johnson is rapidly developing chemistry with QB Philip Rivers. Even at his late-July 12th-round ADP, he could return big value.

Wheaton is still listed as Pittsburgh’s #2 WR, and QB Ben Roethlisberger believes he’ll be the team’s breakout player this year. We’re still banking on Martavis Bryant being the Steelers’ 2nd-most productive WR, but Wheaton could be a fantasy asset in what should be 1 of the top passing attacks in the league.

Hankerson was picked in exactly 1 of 118 drafts in the 1 st week of July. That climbed to 37 of 186 drafts over the final 7 days of the month. So HankTime is still basically free. He’s been impressing in camp and is a solid late-round flier consider Roddy White and Julio Jones’ injury issues.

Walker hasn’t done anything to climb in ADP. People are just starting to realize that he’s a screaming value after finishing 8th among TEs in PPR points last year. Walker is still only the 10th TE off the board in average drafts.

Even a 2-spot fall is pretty significant for a mid-2nd-round pick. Buffalo’s crappy QB situation is likely starting to scare people away from Shady. He’ll have volume on his side, though, and makes sense in the back half of Round 2.

Jeremy Hill is the man in Cincinnati’s backfield — no doubt about that. But Bernard could still rack up 50+ catches and present value at his 5th-round price tag.

As Doug Martin moves up draft board, Sims naturally falls. If the Muscle Hamster is truly in for a bounce-back year, Sims won’t be more than a change-of-pace option.

We learned in July that White had his troublesome knee drained earlier in the offseason. His reps have been limited in training camp, and at least 1 Falcons insider believes Leonard Hankerson could make a push for White’s starting job.

Stills has been limited by a calf injury early in camp, but there’s been nothing to suggest it’ll be an issue come Week 1. We’re still waiting to see what his role will be in a crowded pass-catching corps.

Harvin has reportedly struggled with route-running and been working as Buffalo’s #3 WR. Insider Vic Carucci doesn’t believe he’ll have a “major role” in the offense. Harvin’s big-play ability at least gives him some appeal at this price in best-ball leagues.

Surprising to see Ertz on the “fallers” list considering he remains 1 of the more popular breakout picks this year. His current mid-8th-round ADP might be the cheapest he comes in drafts this year. A big play or 2 in preseason action will spike his price tag.

A popular breakout pick for much of the spring, Hill’s buzz has quieted recently. Insider Mike Triplett doesn’t see a “major breakthrough” this year. Hill hasn’t helped his cause by missing time early in camp with an undisclosed injury.

Gates’ 4-game suspension was announced on July 2. In the month preceding that, he was going 111th overall. He’s dropped almost 3 full rounds since then. There’s value here if you can afford to stash Gates for those first 4 weeks.