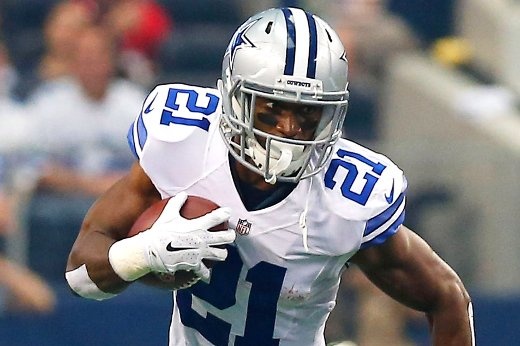 Joseph Randle looked like a potential draft steal just a couple of months ago. Even early June found him intriguing. Now? You have to really believe in the 3rd-year Cowboy to take him where he's going.

Whether you choose to track average draft position or ignore it, there's no denying that ADP will play a huge role in your fantasy football drafts. If you love a player you're getting in Round 8 in May, will he climb up your rankings as draft trends push him into Round 6 for the summer?

Fortunately, you don't need to track ADP trends. We're doing that for you with our exclusive MFL10 ADP Explorer Tool. We take the ADPs from MFL10 drafts, which are PPR-scoring, best-ball leagues. ADP will vary in different league types, but not wildly. And the MFL10 data is the most reliable we have because it’s based on real drafts with money on the line.

We'll be handing you updates on the ADP trends every month, starting with the most significant risers and fallers in June drafts:

News on Palmer’s recovery from last year’s torn ACL has been nothing but positive. He’s on track to be under center for Week 1. A top-15 fantasy QB in points per game the past 2 seasons, Palmer is still a strong value at his 13th-round ADP.

Mariota reportedly exceeded expectations this spring, and the Titans are ready to let him run. It makes the rookie an intriguing QB2 —even at his rising price tag.

Peterson was fighting with Jamaal Charles, Eddie Lacy, Antonio Brown and Rob Gronkowski for positioning behind Le’Veon Bell in early June. Now he’s challenging Bell for #1. Don’t be surprised if AP takes over that top spot by August, especially if Bell’s 3-game ban is upheld.

Folks are getting more comfortable with the idea of taking a soon-to-be 30-year-old RB in the 2nd round. Forsett doesn’t have much mileage on his tires and should get a nice receiving boost with the arrival of OC Marc Trestman.

It’s getting tougher for drafters to resist the upside of Spiller’s big-play ability in Sean Payton’s offense. Spiller is now the 17th RB off the board on average —1 spot ahead of where he sits in our PPR Rankings.

This rookie flashed in OTAs, while RB Joique Bell rehabbed offseason knee and Achilles surgeries. Abdullah is now going almost a full round before his backfield mate.

Randle is the biggest June riser, relative to initial draft spot, at any position. He’s now consistently going in the 5th round. That’s a steep price to pay for a guy with 105 career carries who isn’t even guaranteed a starting job.

One of the buzziest players in the entire league this spring, Johnson’s ADP has rocketed from the 9th round to 7th over the past few weeks. Cleveland seems to view the rookie as more change-of-pace back than lead runner, though. We’re avoiding Johnson for now.

A colossal bust the past 2 seasons, Martin has drawn praise this offseason from Bucs coaches and Tampa Bay media. He’ll head to training camp as the favorite for the starting job ahead of 2nd-year RB Charles Sims. Martin is fairly valued at his current late-7th-round ADP.

This guy was available in the final few rounds of MFL10s back in March but has steadily risen since. He’s still a fine value in the 10th round as the 45th RB off the board.

The star of spring practices, Robinson seems poised for a 2nd-year breakout. Unfortunately, that’s starting to get priced into his ADP. You’ll need to cough up a 5th- or 6th-round pick to land him now.

Both QB Aaron Rodgers and HC Mike McCarthy talked up Adams last month. That seemed to immediately raise his price tag —perhaps into overpriced territory. There’s plenty of weekly upside here, but Adams figures to be tough to trust in fantasy lineups as long as Jordy Nelson and Randall Cobb are healthy.

Brown packed on some weight this offseason and reportedly hasn’t lost any speed. We’ll be keeping a close eye on the Cardinals this summer to see how targets will be divvied between Brown, Larry Fitzgerald and Michael Floyd. But Brown is still the cheapest of the trio.

Drafters are slowly starting to recognize Johnson’s bounce-back potential with the Chargers. He’s been practically free for most of the offseason but is still a sweet value in the 14th round. Antonio Gates' 4-game suspension should only help Johnson's draft stock rise.

Kevin White’s slow start this spring has given Royal a legitimate shot to open the season as Chicago’s #2 WR. He quietly finished as a top-40 PPR WR each of the last 2 years in San Diego.

Ertz has breakout appeal this season, but you’ll need to pay up to land him. He’s jumped into the late 7th round in recent drafts.

We’re not optimistic about Davis bouncing back from last year’s dud. But it’s tough to argue against taking a shot on him even at his current 14th-round ADP.

Bradford has been slow to recover from last year’s torn ACL. Meanwhile, Mark Sanchez turned in a strong spring. Bradford remains the heavy favorite to start Week 1, though, assuming he’s medically cleared. He brings QB1 upside at a dirt-cheap price.

This one’s a bit puzzling because the buzz on Bortles this spring has been positive. Chalk it up to a deep overall pool of QB2s. But Bortles is an intriguing dice roll at his current price.

Sidelined all spring after undergoing knee and Achilles surgeries, Bell has watched rookie Ameer Abdullah get off to a hot start. The vet needs to get and stay healthy this summer to hang on to the starting job.

A strong spring from Doug Martin has Sims heading to training camp #2 on the depth chart. Don’t completely count him out of the competition for the starting gig, though. And, at minimum, he figures to play a significant pass-catching role.

McFadden has fallen behind Joseph Randle in the race for the starting job after missing time this spring with hamstring trouble. He’ll still get a crack at the gig in August, and although we’re not optimistic, McFadden might be a better gamble at his current price tag than Randle.

A 2-spot drop in the 1st round is significant. Some drafters are backing off Bryant because of his contract squabble, but we’d be shocked if he wasn’t on the field come Week 1. Bryant sits 4th in our WR Rankings and is a solid pick near the end of Round 1.

Tough to peg the reason for Sanders’June drop. Perhaps folks are worried about Peyton Manning and a run-heavier Broncos offense. Or maybe it’s the threat of Cody Latimer stealing targets. Sanders feels fairly priced here but could become a value if he falls much farther.

Benjamin reported to OTAs overweight and then missed time with a hamstring injury. Not a good start as he looks to build off last year’s 16th-place fantasy finish.

There wasn’t much buzz on Watkins this spring as he rehabbed his surgically repaired hip. That probably has something to do with his drop in ADP. So does a Bills QB group that reportedly looked awful in OTAs and minicamps.

While John Brown was the talk of spring practices, Floyd was mostly quiet. It’s worth noting, though, that he’s still the 1st Cardinals WR off the board on average in fantasy drafts.

Drafters were a little trigger-happy on White after the NFL draft. He was going in the 6th round in early June, just ahead of Allen Robinson. His current 7th-round ADP still feels a bit pricey to us but makes more sense for a rookie WR with a wide range of potential 2015 outcomes.

Hill was 1 of the hottest names in fantasy football for much of the offseason. The buzz has died down a bit, dropping his ADP into the 11th round. He’s a fine shot to take there, although we still prefer Larry Donnell, Charles Clay and Jordan Reed, who all go at least 2 rounds later.