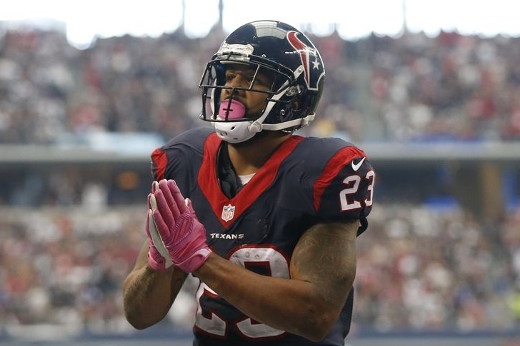 Season-ending injuries to WRs Jordy Nelson and Kelvin Benjamin have sent shock waves through fantasy drafts. Five Packers and 2 Panthers appear on the late-August risers list, while QB Cam Newton is a faller.

But the most intriguing name here might be Arian Foster. The former 1st-rounder dropped as low as the 7th round but has now climbed back into the early 5th.

Here’s a look at 17 of the biggest ADP movers in the 2nd half of August.

Brees has climbed mostly because other mid-range QB1s like Cam Newton and Ben Roethlisberger have fallen. Brees is now the 6th QB off the board in average drafts, 1 spot lower than he sits in our QB rankings.

The Foster Discount was short-lived. With reports that he might be back in late-September, he's now going in the early 5th round. That’s a fair price for a guy who could still give you 12+ games of RB1 production.

Ivory has emerged as New York’s clear lead back this month, ripping off 99 yards and a TD on 17 preseason carries. There’s not a ton of value left at his late-5th-round ADP.

Hillman has been 1 of the most impressive players in the league this preseason, averaging 7.4 yards a pop on 21 carries. He’s taken command of the #2 spot on the depth chart, making him worth handcuffing to C.J. Anderson.

If you want Green Bay’s new #1 WR, you’re gonna have to pay up. Cobb is going at 2.05 in 12-team drafts since Jordy Nelson’s season-ending knee injury. We’ll see if Cobb’s sprained shoulder lowers that price at all. He’s a nice value in the back-half of Round 2.

Cooks is creeping toward the 2nd round. He’s looked ready for a breakout this preseason, hauling in 7 balls for 164 yards and 2 scores. We recently moved Cooks ahead of T.Y. Hilton and Mike Evans in the PPR rankings.

He’s reportedly dominated at training camp and looked just as strong in preseason action. As the #1 WR in a Chip Kelly offense, Matthews boasts WR1 upside.

Hoping to land Adams? Be ready to target him in the 4th round. He’s the 20th WR off the board on average and sits 18th in our WR rankings.

Folks are starting to catch on to our 2015 Breakout Player. Johnson is still a nice value in the late 6th round.

Not surprisingly, this rookie’s ADP has climbed since WR Kelvin Benjamin’s season-ending knee injury. But Funchess’ price hasn’t risen out of control. There are some WRs going behind him that we prefer (Kendall Wright, Marques Colston, Pierre Garcon, Stevie Johnson), but Funchess is a fine shot to take in the 9th round if you’re mining for upside.

The Saints’ training camp MVP, according to HC Sean Payton, has climbed into the 14th round. Coleman has been quiet in preseason action, though, mustering just 1 catch for 27 yards.

These 2 guys are battling for the #3 spot in Green Bay’s Jordy Nelson-less WR corps. Montgomery has the early edge and is going about a half-round earlier than Janis. We still think Janis is the better fit to replace Nelson, but both guys are worth a shot at these prices.

Olsen is gonna be a busy boy with WR Kelvin Benjamin done for the year. He sits just 1 point behind Travis Kelce and 9 behind Jimmy Graham in our PPR projections. Olsen is now being selected 3 picks after Kelce and 19 after Graham.

Newton lost 26.3% of his 2014 passing yards and 39.1% of his passing TDs when WR Kelvin Benjamin suffered a season-ending knee injury. It’s a big blow to his fantasy upside, but his rushing ability could make him a value pick at this current 10th-round ADP.

Bernard has had a quiet camp and an even quieter preseason, totaling just 35 yards on 13 touches. He’ll probably be tough to count on in non-PPR leagues but should still be an asset in PPR setups.

The Giants’ backfield looks like an ugly 3-headed committee. We aren’t drafting Jennings as more than a RB3 and still aren't very interested at this 7th-round price.

Crowell has failed to separate himself from the pack this preseason. It looks like he’ll start the season as part of a committee in an offense that doesn’t figure to score many points.

We’d been mostly avoiding Bryant this summer at his pricey ADP. He’s dropped almost a full round over the past 2 weeks, but he’ll still need to sink another round for us to be interested.

It’s been a rough offseason for White. He had his knee drained prior to minicamp and underwent elbow surgery this month. White’s body might be done with this whole football thing. His deflated price lowers the risk, but we’re not aggressively targeting him in the 8th round.

LaFell remains sidelined with that foot injury and reportedly might start the season on the PUP list. He’s need to drop another few rounds past his current ADP for him to make sense gambling on.

The rookie will miss at least the first half of the season and might not play at all after undergoing leg surgery. White is only worth rostering in leagues with an IR slot.

ASJ was overvalued at his 10th-round ADP back in April. Now he’s an intriguing target in the early 13th.