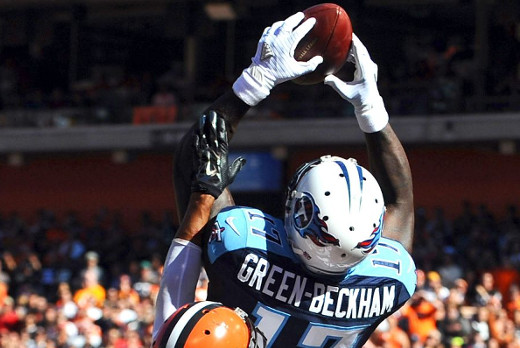 We’re still 7 weeks away from the start of the 2016 season. But it's never too early to keep an eye on ADP trends.

Projections and rankings are only half of the equation in fantasy football drafts. Knowing when guys are likely to get picked is just as important.

That’s why we built the MFL10 ADP Explorer to dissect draft trends. MFL10s are PPR-scoring, best-ball leagues. ADP will vary in different league types, but not wildly. And the MFL10 data is the most reliable we have because it’s based on real drafts with money on the line.

Here’s a look at the 21 biggest ADP risers and fallers through the first 3 weeks of July:

Taylor is coming off a strong spring after ranking 7th among QBs in fantasy points per game last year. His upside hinges on WR Sammy Watkins’ health, but Taylor is a fine value at his current QB16 ADP.

ESPN’s Jamison Hensley recently deemed Forsett the favorite for the starting job heading into camp. The 30-year-old will need to hold off youngsters Kenneth Dixon and Buck Allen. But if he does, there’s lots of fantasy upside in OC Marc Trestman’s RB-friendly offense.

The New York media believe Jennings will operate as the Giants’ lead back this season. Only 4 RBs scored more PPR points over last year’s final 4 weeks, when Jennings racked up 86 touches.

Coleman had a good spring and is set to see more action this year as Atlanta looks to decrease RB Devonta Freeman’s workload. We’ll be keeping an extra close eye on this backfield during training camp and preseason action.

This rookie at least looks like the favorite for change-of-pace duties in Oakland. And if RB Latavius Murray doesn’t improve upon last year’s 4.0 yards per carry, Washington could carve out an even larger role.

Karlos Williams’ 4-game suspension opens Buffalo’s #2 RB job for competition. Jonathan Williams, of course, has his own legal troubles to sort through. Mike Gillislee will head to training camp as the favorite for the backup job. He’s not even getting picked in most drafts.

Woods has yet to rank higher than 45th among WRs in PPR points. He’ll need Sammy Watkins to miss significant time in 2016 to best that finish. Woods isn’t a bad pick at his current ADP, though.

Insider Eliot Shorr-Parks recently predicted that Randle would win the Eagles’ #2 WR job. Even then, his upside would be limited behind Jordan Matthews and Zach Ertz in what figures to be a run-heavy offense.

Ellington is a name to keep in mind as a potential late-round flier. He worked as San Francisco’s starting slot receiver this spring and could be busy as a short-range target for whoever is under center for the Niners.

Boldin doesn’t even have a team yet, but recent rumors of interest from the Saints have his ADP on the rise. New Orleans might be the best landing spot for the 35-year-old. He’d battle with rookie Michael Thomas for the “big slot” role.

Tye quietly ranked 8th among TEs in PPR points over last season’s final 7 weeks. He’ll head to training camp as the favorite for the 2016 starting job.

Crowell’s social media mishap had him in hot water for a few days, but it doesn’t look like it’ll impact his 2016. He remains the favorite to lead the Browns in rushing and is a nice value at RB41.

With good news on Le’Veon Bell’s rehab trickling in, Williams price has sunk. He’s still the most valuable handcuff in fantasy football, though. His 19.6 non-PPR points per game and 23.2 in PPR over 9 games without Bell last year would have paced RBs by a wide margin.

Williams has had a disastrous offseason, showing up to OTAs overweight and then getting banned for 4 games for substance abuse. He’s turned into just a late-round flier.

Justin Forsett heads to training camp atop Baltimore’s RB depth chart, but Allen is capable of passing him. He ranked 3rd in PPR points among RBs with Forsett sidelined for the final 6 weeks last year. That upside makes Allen worth considering at this dirt-cheap price.

DGB missed some time this spring with hamstring trouble and heads to camp as a reserve. There’s still time for him to win a starting job, though. He remains the most physically gifted WR in Tennessee. Coming at a half-round discount from earlier this month, he’s a worthwhile gamble.

Wallace is our top-ranked Ravens WR. But he’s going behind Kamar Aiken and Steve Smith in recent MFL10 drafts.

He was passed on the depth chart by both Rishard Matthews and Tajae Sharpe this spring. It sounds like the Titans plan to use Wright as their slot receiver this year.

Ginn finished 34th among WRs in PPR points last year but (rightfully) isn’t getting much love this summer. He figures to settle in as Carolina’s #3 WR this season behind Kelvin Benjamin and Devin Funchess.

Eifert’s ADP has been sinking since he had ankle surgery in May. It took another dive recently when director of player personnel Duke Tobin hinted that Eifert isn’t expected to be ready for Week 1. He’s working his way toward a range where the potential reward outweighs the risk.

Hurting at TE? We've got 2 guys to go trade for right now. Plus 9 more names to buy, sell or hold.