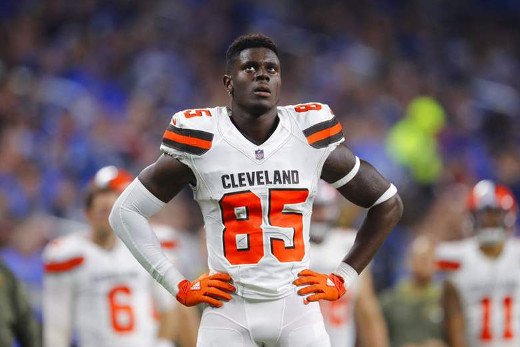 I’ve never journaled before. This is the closest I’ll ever come to journaling.

The first real week of fake games starts now. I’ll be watching as many games as possible, tracking all of them and keeping a running tab of observations and fantasy takeaways here. Check back often for updates.

* Bengals RB Joe Mixon shaked-and-baked his way to a 24-yard receiving score against the Bears. Split out wide to the right, he caught a quick pass from QB Andy Dalton, stiff-armed 1 defender and spun past another. Mixon also received all 3 carries on Cincinnati’s 1st offensive possession. This was a super encouraging night for Mixon in both the usage and performance departments.

* Bengals WR John Ross ran with the starters (as expected) and was targeted on 3 of QB Andy Dalton’s 8 pass attempts. He caught just 1, but it was an impressive 20-yard catch-and-run.

* Ravens RB Buck Allen had 3 opportunities (1 carry, 2 targets) to Alex Collins’ 1 carry on QB Joe Flacco's lone drive. We’re not adjusting our projections for the Baltimore backfield based on 1 possession, but the division of labor will be worth monitoring in the next 2 preseason games.

* John Kelly was the 3rd RB in for the Rams, behind Malcolm Brown and Justin Davis. (Todd Gurley didn’t play.) But the rookie busted off an impressive 40-yard run, making multiple defenders whiff. Kelly has a good shot to win the #2 RB job by Week 1.

* RB Christian McCaffrey punched it into the end zone from 2 yards out on Carolina’s 2nd offensive possession. It’s noteworthy that he got that carry over RB C.J. Anderson, who surprisingly didn’t see the field with the Panthers starters and played into the 3rd quarter. That’ll be a situation to watch in Carolina’s 2nd exhibition.

* Panthers 1st-round rookie WR D.J. Moore finished his debut with 4 catches for 75 yards. He had another 7-yard grab called back by a penalty. His damage came against the Bills’ backups, but Moore looked explosive after the catch and made a nice adjustment for a 32-yarder.

* All 3 Bills QBs looked surprisingly good on Thursday night. Nathan Peterman got the start, completing 9 of 10 passes for 119 yards, 1 TD and 1 INT on 2 series. The INT bounced off RB Chris Ivory’s helmet. A.J. McCarron was next in, finishing 7-of-10 for 116 yards on 2 series of his own. Rookie Josh Allen went just 9-of-19 but totaled 116 yards with 1 TD and 0 INTs. Allen flashed his big arm, looked poised and ran for 29 yards. This competition remains wide open.

** Bills WR Kelvin Benjamin was targeted on 4 of Peterman’s 10 passes with the 1st-team offense, hauling in all 4 of them for 59 yards and a score. QB play remains a concern in Buffalo (although this game was encouraging), but Benjamin won’t hurt for targets this season.

* RB Peyton Barber got the start for the Bucs, handling the team’s first 6 RB touches. He finished with 21 yards and a TD on 4 carries. RB Ronald Jones scored from 2 yards out but finished the night with just 9 yards on 8 carries. He was also pulled for RB Jacquizz Rodgers on a 3rd and 10. The rookie has some work to do to earn the Week 1 starting job.

* Saquon Barkley did Saquon Barkley things, ripping off a sick 39-yard run on his 1st touch. He also tried to bounce a few runs outside, which is 1 of the (very few) knocks against him. The rookie out-carried Jonathan Stewart 5 to 2 with the starters — although Stewart saw the only 2 RB targets.

* Browns TE David Njoku flashed his sky-high ceiling with 2 TDs on Thursday night — a 36-yarder down the seam from Tyrod Taylor and a 10-yard contested catch in the back of the end zone from Baker Mayfield. The 2nd-year TE has obvious breakout potential, although his ADP is sure to climb after this one.

* Carlos Hyde and Duke Johnson got the only RB touches with Tyrod Taylor and the Browns’ 1st-team offense. Rookie Nick Chubb struggled to just 11 yards on 15 carries.

* Browns QB Baker Mayfield had his full arsenal on display in his debut. He completed 11 of 20 passes for 212 yards and 2 scores, adding 13 yards on the ground. Tyrod Taylor did nothing to loosen his grip on the starting job, going 5-of-5 for 99 yards and a TD. But we’re still betting on seeing Mayfield make multiple starts this season.

* Browns rookie WR Antonio Callaway lit it up (pun intended), hauling in 3 balls for 87 yards and a score. That included a 54-yard catch-and-run TD and a toe-tapping sideline grab for 24. We’ll see if Callaway can stay clean off the field, but he looks ready to make an instant impact on it.

* Packers RBs Jamaal Williams and Ty Montgomery rotated series in the 1st half, with Williams playing the 1st and 3rd and Montgomery the 2nd and 4th. Williams carried 5 times for 16 yards and caught an 8-yard TD. Montgomery totaled 9 yards on 3 totes and failed to corral either of his targets. RB Aaron Jones didn’t play as he continues to deal with a hamstring injury.

* All 3 of the Packers’ rookie WRs hit the stat sheet on Thursday night. J’Mon Moore caught 3 balls for 27 yards, Equanimeous St. Brown hauled in 4 for 61. But Marquez Valdes-Scantling won the night, racking up 101 yards and a score on 5 receptions. Veteran Geronimo Allison, who finished with 2 catches for 12 yards, remains penciled in as Green Bay’s #3 WR — but all 3 rookies are capable of pushing for that spot. Note that QB Aaron Rodgers didn’t play in this one.

* Jaguars QB Blake Bortles led his offense to a TD on his only drive of the night. He went 6-of-9 for 53 yards and scored on a 2-yard bootleg run. Bortles targeted WRs Dede Westbrook and Donte Moncrief 3 times apiece and WR Marqise Lee twice. WR Keelan Cole didn’t play.

* Saints RBs Terrance West and Shane Vereen played with the 2nd-team offense vs. the Jaguars. Jonathan Williams and Boston Scott played with the 3rd-team. Williams turned in the best stat line, rushing 4 times for 26 yards and a score. We’ll continue to monitor this battle for playing time with Mark Ingram suspended for the season’s first 4 games.

* Eagles TE Dallas Goedert looked excellent in his debut vs. the Steelers, hauling in 4 balls for 66 yards and a score from 15 yards out. The rookie has reportedly been busy in the red zone in camp.

* Texans TE Jordan Akins caught a pair of TDs vs. the Chiefs. (Here’s one.) Both came from backup QB Brandon Weeden — but this performance should earn him some work with the 1st-team offense going forward. Akins is a 3rd-round rookie who started his college career at Central Florida as a WR.

* Rashaad Penny played better than his stat line would indicate. He was often met by a defender in the backfield and made multiple guys miss throughout the game.

* Raiders RB Marshawn Lynch busted off a 60-yard TD that was negated by a holding penalty. He out-ran Lions S Glover Quin's angle. The 32-year-old Lynch can still scoot.

* After a 1-attempt cameo by Jets QB Josh McCown, QBs Teddy Bridgewater and Sam Darnold both played well. Bridgewater completed 7 of 8 attempts for 85 yards and a score. Darnold went 13-of-18 for 96 yards and a TD. Here's every throw from the rookie in his debut.

* Bilal Powell received the first 5 RB touches for the Jets. Isaiah Crowell got the next 3, including a 16-yard TD reception on which he reportedly sustained a concussion.

* RB Devontae Booker got the start for the Broncos, but RB Royce Freeman also got on the field with the starters, carrying once and seeing a target. The rookie finished with 38 yards and a score on 4 carries, highlighted by this 23-yard TD. Booker carried twice for 7 yards.

* Chase Edmonds was the 2nd RB in for the Cardinals. He totaled just 11 yards on 5 carries but had this impressive 2-yard score. The rookie looks like the handcuff to David Johnson.