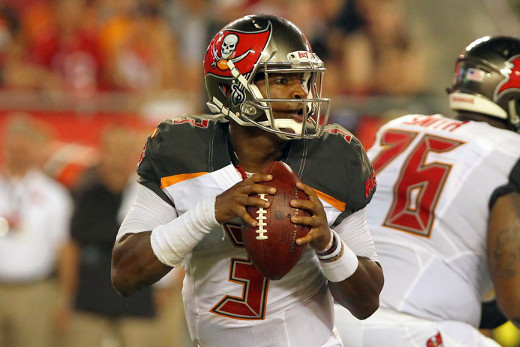 Winston diced the Browns defense for 259 yards and 2 TDs on 16-of-25 passing in just 1 half of action. He hooked up with WR Mike Evans 5 times for 115 yards and a score and also connected with RB Charles Sims for a 3-yard TD.

If Winston is done for the preseason, he finishes with a 59.1% completion rate, 8.7 yards per attempt, 4 TDs and 1 INT. There’s breakout potential here if Tampa lets him chuck it enough.

Tony Romo’s back injury surfaced just 3 plays into the game. That gave Prescott valuable reps against a stingy Seattle defense, as he played until the final play of Quarter 3.

Prescott completed 17 of 23 passes for 1 TD (0 INTs), but he mustered only 116 yards. He flashed excellent mobility, executing 1 zone-read rush. He wasn’t afraid to take deep shots, either, and wasn’t helped by a long-range drop from Terrance Williams. Arm strength certainly isn’t an issue for the rookie.

While growing pains are a given, Prescott could enter the streaming radar once bye weeks hit.

Jay Ajayi started for Miami. But Foster made it though his 1st game action since October without a setback … and that’s a huge hurdle.

He looked solid, too, cutting sharply en route to a 2-yard rushing score. He also showed some wiggle in the receiving game.

Miami’s run blocking remains suspect, and we remain skeptical that Foster can hold up if consistently given large workloads. But Thursday’s outing was clearly a step forward for the 30-year-old.

As expected, DeMarco Murray started. He even continued his hot preseason with 8 carries, 40 yards and 1 score.

Henry, though, excelled when given opportunities. He converted a goal-line carry from 3 yards out and continued to show a punishing, downhill style. Henry totaled 49 yards on 12 carries and added an 8-yard catch while lined up at fullback.

We’d be surprised if Henry exceeds 20 catches this season. But he’s earned a rushing role to open the year, and strong play from Tennessee’s O-line only boosts his stock.

Elliott’s 1st pro appearance turned up 48 yards on 7 carries. The rookie showed an ability to rack up yards after contact, while he excelled on runs to the perimeter. Elliott also looked excellent in pass protection.

Bell looked like Bell on Friday night — and that’s a good thing. In his 1st game action since last year’s torn MCL and PCL, he carried 3 times for 21 yards and added 37 more yards on 5 catches.

Bell said afterward that he felt “great … I can only imagine how I'll feel in a month.” He’ll return from his 3-game suspension as an elite fantasy option.

After failing to hit pay dirt a single time as a rookie, Gordon did it for the 2nd time this preseason on Sunday afternoon. He took advantage of a gaping hole and raced into the end zone for a 39-yard TD.

He finished with 4 carries for 51 yards and that score, plus a 5-yard catch, in 3 series. Danny Woodhead toted it 3 times and failed to corral his only target during that time.

Bernard was excellent on Sunday night, showing patience and burst on his way to 27 yards on 3 carries. He also scored a 19-yard TD on a perfectly executed screen pass.

While this will remain a committee backfield with Jeremy Hill, Bernard has proved capable of producing RB2 fantasy numbers in that setup. He remains a nice target at his 6th-round price tag.

Spiller’s stat line doesn’t jump off the page: 4 carries for 20 yards, 3 catches for minus-1 yard.

But Spiller looked as healthy as we’ve seen him in a while. And, more importantly, he saw extensive action with the 1st-team offense. All 7 of his touches came in QB Drew Brees’ 3 series.

Once bandied about as a cut candidate, Spiller now looks set to play a sizable role for the Saints. He’s worth a look late in PPR drafts.

Gaffney didn’t do anything special in Friday night’s game against the Panthers, taking 9 carries for 35 yards (3.9 YPC). He appears in the Winners section here because he started over LeGarrette Blount, playing New England’s first 2 series before Blount entered.

Blount and Gaffney have played to a draw this preseason, with the former averaging 4.6 yards per carry and the latter at 4.5. Blount’s experience still gives him the edge for big-back duties. But with the Patriots, we just never know.

Gordon took the field on Friday night for the 1st time in more than 20 months. You wouldn’t have known it watching him play.

Gordon skied above Bucs CB Brent Grimes for a 43-yard TD and also broke wide open for a 44-yard deep ball. If this guy’s head is screwed on right, he remains 1 of the league’s most talented WRs. Draft accordingly.

Minnesota’s passing game looked good on Sunday against the Chargers. And it was Diggs leading the way. He snagged all 5 of his targets from QB Teddy Bridgewater for 71 yards.

Diggs will open the season as the Vikings’ clear-cut #1 WR.

Surprisingly, Stills played over DeVante Parker against the Cowboys. Stills recorded 7 snaps in 2-WR sets compared to 0 for Parker. The former Saint continued to produce, this time posting 4 grabs for 46 yards.

It’s important to remember that Stills is just 24 years old and started his career with promise in New Orleans. Entering a contract year, his ceiling extends to WR3 range.

Sharpe’s numbers aren’t important. He caught 1 pass for 60 yards, although that gain happened when S Nate Allen took himself out of the play. In fact, Sharpe was caught from behind, showing his lack of breakaway speed.

The takeaway here is usage. Sharpe finished with 4 targets in roughly a quarter and a half. As ESPN’s Adam Caplan tweeted, “Coaches will move him around to create better matchups.” Sharpe is expected to start alongside Rishard Matthews in 2-WR sets, making him a potential matchup play.

Fuller shined in Houston’s 3rd preseason game against a strong Cardinals defense. The rookie ran by CB Justin Bethel for a 35-yarder and a 26-yard TD. Fuller also dropped another would-be big gainer, something the Texans and fantasy owners will need to deal with. But his big-play ability will give him intriguing weekly upside.

Hogan shined in Friday night’s game against the Panthers, hauling in 5 of 6 targets for 62 yards and a score. Four of Hogan's catches came from QB Jimmy Garoppolo, but he also caught a beautiful 33-yard TD from QB Tom Brady. Hogan seems set to open the season with a significant role.

Rogers looks set to open the season as Pittsburgh’s starting slot receiver. He played that role in the team’s 3rd preseason game, hauling in 2 of 4 targets for 17 yards in 2 series with QB Ben Roethlisberger.

Rogers isn’t yet worth a roster spot in most fantasy leagues, but his volume will be worth keeping an eye on early this season.

QB Aaron Rodgers’ first 2 passes of the preseason went to Cook: 1 complete for 19 yards, the other incomplete. (Cook hauled in 3 more passes for 35 yards from QB Joe Callahan.)

We’ve heard that Cook and Rodgers have quickly formed a strong rapport. If that’s the case, his ceiling extends all the way into TE1 territory.

Ladarius Green’s head and/or ankle issues have James set to open the season as Pittsburgh’s starting TE. He looked good in that role on Friday night, corralling 4 of 5 targets for 25 yards and a score. Four of those looks came from QB Ben Roethlisberger. James also had a 13-yard grab called back by a penalty.

The 6’7, 261-pounder could emerge as a valuable red-zone weapon and potential fantasy football spot starter.

He completed just 2 of 6 passes for 14 yards in 3 series. He picked up 18 yards on 4 carries but didn’t look anywhere close to being ready to be San Francisco’s starter.

Gabbert will open the season under center for the Niners. Kaepernick might not even be on the team.

Most assumed Goff would immediately start for Los Angeles.

He simply hasn’t won the job, though. Saturday vs. Denver, Goff failed to complete any of his 6 passes when under pressure (per Pro Football Focus). He’s lacked pocket awareness, and he’s failed to impress with ball placement.

Case Keenum is slated to open the year as the Rams’ starter.

Marshall’s 1st and only carry on Friday night resulted in 3 yards and a sprained elbow. If he’s done for the preseason, he finishes with a hideous 1.8 yards per carry and 2.3 yards per catch.

Marshall has been out-played by undrafted rookie Rob Kelley, who took 12 carries for 51 yards and looked good in pass protection Friday night.

The good: Coates hauled in 2 balls for 66 yards and a score in Friday night’s game against the Saints.

The bad: Both of those catches came from QB Landry Jones and the 2nd-team offense. Coates played clearly behind Antonio Brown, Markus Wheaton and Eli Rogers. It doesn’t look like he’ll open the season with a starting job.

If you’re scoring at home — and we are — Smith has been targeted on just 1 of likely starter Blaine Gabbert’s 22 preseason throws.

We’re not completely off the Smith Bandwagon, but he’ll be tough to trust in fantasy lineups early on this season.