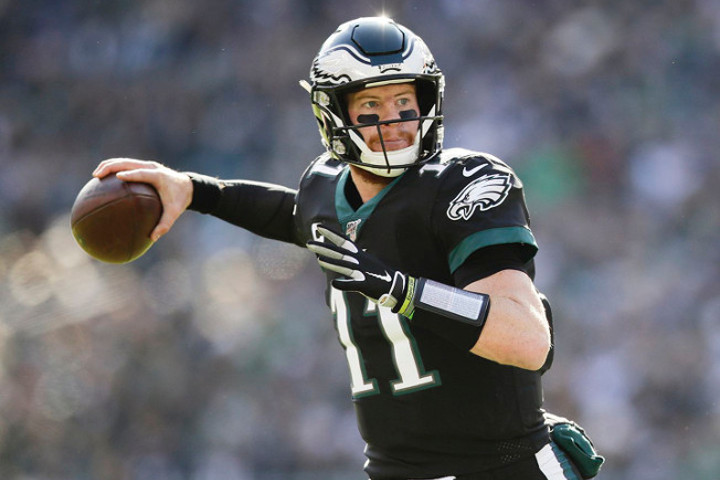 Waiting on a QB is alive and well.

Drafters are wisely staying patient if not in the Lamar Jackson or Patrick Mahomes market; the gap between those 2 and the QB3 is historically huge (39 picks).

While we’re generally passing on the elites — the opportunity cost at RB/WR is too great — there’s no shortage of attractive QB options.

The QB3 referenced above is Dak Prescott, one of our favorite targets. Round 6 might feel a bit early to select your fantasy passer. Prescott, though, looks to be in a tier of his own, 10 projected points behind Jackson but 17 ahead of Kyler Murray. Our floor and ceiling projections — found on your MVP Board — have Dak sitting 3rd in both.

Besides, with a Round 6 ADP, you can build a strong foundation (say, with 3 RBs and 2 WRs) before selecting the Cowboy. And especially if you’re in a 10-team league, it’s not necessary that you invest another draft pick in a QB if you take Dak.

There’s just not a negative in his fantasy game. He’s coming off his best passing season as a pro and gets the benefit of OC Kellen Moore returning. CeeDee Lamb — a training camp darling — joins a loaded offense featuring Amari Cooper, Michael Gallup, Zeke Elliott and Blake Jarwin. (OK, so Jarwin might not belong in the same company as the others. But he's a playmaking upgrade on Jason Witten.)

Rushing upside, durability and stable pass volume only builds the case for this 27-year-old.

He labored through a tough-luck 2019. DeSean Jackson and Alshon Jeffery missed substantial time, leaving Nelson Agholor and Greg Ward as his top 2 WRs. This 2020 unit is night and day better with Jackson healthy and Round 1 pick Jalen Reagor adding another speed element. Jeffery might miss early season games on the PUP list as he works back from a foot injury. But anything the Eagles get from him should be considered a bonus.

Now, Philly doesn’t want Wentz checking it another 607 times. But his career numbers say he’s capable of improving a 4.4% TD rate and 6.7 yards per attempt. As long as the O-line pulls through — losing G Brandon Brooks was rough — Wentz will project favorably inside the top 10.

Drafts rarely work out exactly how you plan. So of course, you’ll want to queue up more than 2 QBs on the big day.

Tom Brady typically goes in front of Wentz, but the new Buc is in play in the Round 8 range. We have no questions about his volume, or a pass-catching group that includes Mike Evans, Chris Godwin and Rob Gronkowski. We’ve heard that Gronk looks sharp after the year off. Brady’s schedule also looks like the league’s most fantasy friendly to QBs.

The Rams’ brisk offensive pace and ability to mesh 11 and 12 personnel bodes well for Jared Goff. He’s in for some positive TD regression, even if he’s a long shot to repeat 626 attempts. His 3.5% TD rate from a year ago followed seasons of 5.9% and 5.7%. The Rams’ O-line at least did well to keep pressure off of Goff last year; his 18.5% pressured rate was tied for 4th lowest league-wide. Massive LT Andrew Whitworth returns for his 15th season.

With a Round 13 ADP, Goff’s an easy value target.

So, too, are a pair of AFC North passers going around the same range: Joe Burrow and Baker Mayfield. Burrow looks pro ready and brings some sneaky rushing upside. A healthy A.J. Green could really unlock some early success. Mayfield received offseason upgrades in the coaching staff, O-line and TE room. Plus, he gained a healthy Odell Beckham. Year 3 should bring plenty of spot-start value.

It’s a small gain, but both QBs benefit from the Ravens releasing one of the league’s top safeties in Earl Thomas.

While we’re not taking 2 guys from this group, 1 + another from a previous tier sets you up nicely.

Pairings of Brady/Minshew, Wentz/Bridgewater and Burrow/Bridgewater look strong from a schedule standpoint. If you select anyone in the ranks from Mahomes through Watson, pass on a backup.

As for this range — Carr and Lock will deal with a lot of change, but it’s the positive kind. Carr gains an elite speedster in Henry Ruggs and a physical, Davante Adams type in Bryan Edwards. GM John Elway has surrounded Lock with perhaps the most intriguing group of young talent in the league, headlined by Courtland Sutton, Jerry Jeudy and Noah Fant. He’ll also need to absorb a new system under OC Pat Shurmur, so keep early-season expectations in check.

Bridgewater tops the others in projected ceiling. We’re most intrigued by his skill set, the wide open scheme brought in by HC Matt Rhule and OC Joe Brady, and a young pass-catching corps that includes (among others) D.J. Moore, Christian McCaffrey and Curtis Samuel. A bad Carolina defense is just the cherry on top.

Bridgewater looks like a candidate to start hot with a Week 1 matchup vs. the Raiders and a Week 2 date in a shootout spot at Tampa Bay.