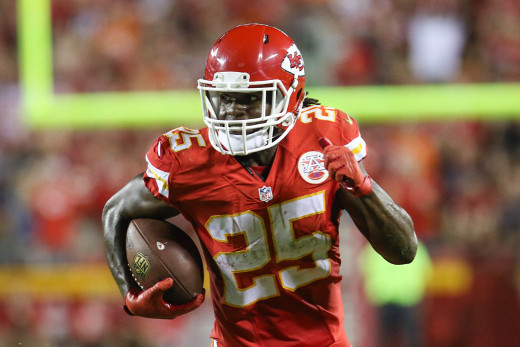 I’m anti-Zero RB. And with how quickly WRs are flying off draft boards this summer, I usually end up starting RB-heavy. Not necessarily by design, but because RBs represent the best value regardless of position.

That was the case again in the Scout.com Experts Draft I took part in last week. But for the 1st time, this draft made me wonder just how RB-heavy is too heavy.

A whopping 28 WRs were gone by the end of the 4th round. I had just 1 of those guys. That meant I was diving into the 30s just for my WR2.

That had me feeling a bit uneasy about my WRs by the end of this thing. And it reminded me that there’s a limit to what “value” is worth. You need to fill out a starting lineup, and bench players don’t score points.

So you might need to grab a WR or 2 a bit earlier than you’re comfy with — or the MVP Board tells you to — in order to build the strongest team. At least that’s what I learned in this draft.

Close call between Jones and Odell Beckham. Jones gets the slight edge based on volume. He out-targeted Beckham by 2.2 targets per game last year.

2.11 is a fair price to pay for a guy with risk coming off a torn ACL, but also massive upside. Charles had finished as a top 9 PPR RB in 3 straight seasons prior to last year, including #1 in 2013.

I’d been wondering where I’d feel comfy drafting Bell, and this is it. With last year’s knee injury looking like less and less of an issue with each passing day, there’s a good chance I’m getting 12 games of top 3 RB production in the 3rd round.

The top-ranked WR available, by the way, was Golden Tate. Tough to justify taking Tate’s limited ceiling over Bell.

I’ve drafted Lacy a few times in the early 3rd round, so no way was I passing him up in the late 4th. An in-shape Lacy was a top 8 fantasy RB in both of his first 2 seasons.

Getting Lacy here also made it much less of a priority to land DeAngelo Williams to cover Bell’s 4-game suspension.

I was hoping for Michael Floyd, who went 1 pick ahead of me. I’ll settle for his teammate. Brown ranked 25th among WRs in PPR points last year and hasn’t reached his ceiling yet. He was the 30th WR off the board.

Two WRs were available here — Emmanuel Sanders and Marvin Jones — that we have projected within 4 points of each other. I gambled that at least 1 would make it back to me and grabbed a high-end TE.

Jones was snapped up, but Sanders made it back. He’s not a guy I’ve been aggressively targeting because of Denver’s QB issues and what figures to be a run-heavy offense. But I’d be shocked if Sanders didn’t finish higher than WR39, which is what I drafted him as here.

In 3 seasons in Philadelphia, Chip Kelly’s #1 WRs finished 12th, 9th and 16th in PPR points. I don’t expect Smith to climb that high, but I do think he’ll smash the WR46 price tag I paid here.

We have Thomas projected for more PPR points than any of the WRs that were available. He averaged 4.4 catches, 45.1 yards and .57 TDs over last year’s final 7 games. I might use him in the flex spot.

Considered waiting longer to take a QB, but Manning was the last guy remaining in his tier. He’s finished as a top 9 fantasy QB in both of his first 2 seasons under former OC/current HC Ben McAdoo.

Lots of Thomas hype coming from Saints training camp. Even if he’s 3rd or 4th in line for targets, there’s fantasy upside on an offense that’s ranked among the top 10 in passing yards and TDs in 9 straight seasons.

I’m buying into a bounce-back season for Wallace, who’s a much better fit with big-armed Joe Flacco than he was in Minnesota or Miami.

Just in case Eddie Lacy succumbs again to the allure of Taco Bell.

Williams ranked 44th in PPR points last year with crappy QB play. He finished 53rd and 45th, respectively, the 2 prior seasons. I got him here as my WR7 and the 71st WR off the board.

ASJ had a poor spring and has been passed on the depth chart by Cameron Brate. There’s still an intriguing ceiling on a 6’2, 262-pounder with elite athleticism, though. And his price has plummeted, mitigating much of the risk in selecting him.

Under HC Mike Zimmer, this defense has climbed from 23rd to 14th to 7th in fantasy points. I think they make another jump up the rankings this year.

A healthy Spiller could be a PPR factor. Saints RBs have averaged 139 catches over the last 9 seasons under HC Sean Payton and QB Drew Brees.

Betting on a bounce back from the Packers offense. Crosby was a top 5 kicker in 2013 and 2014 before sinking to 16th last year. 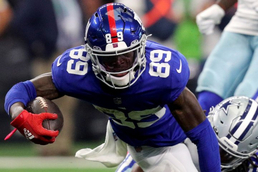 Monday Night Football might start with some more "Who's in? Who's out?" questions ... but it also holds some intriguing potential answers for your DraftKings and FanDuel lineups.