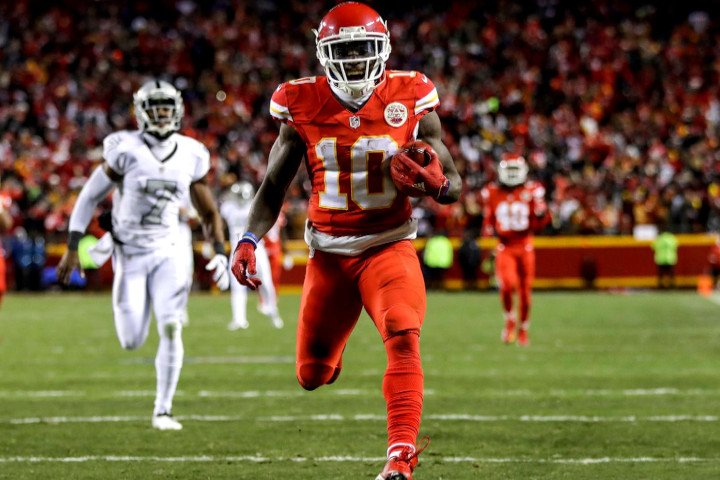 One of the biggest mistakes fantasy owners make is drafting as if the team you leave the draft with is your team for the season.

That, of course, isn’t the case. Your team will change -- often dramatically -- from draft night till the end of the season via free-agent moves and trades.

Use that to your advantage. Draft with some freedom. Take the best players regardless of position, at least for the first handful of rounds.

That’s certainly what I did in my FFPC Main Event draft. And that meant taking just 1 RB through 7 rounds.

So my RB corps is far from championship-ready. But I’ll hopefully find a starter or 2 with my middle and late round picks, or on the waiver wire. The good news is that I’m strong at QB, WR and TE. Those guys should carry me while I figure out RB.

Before we get to the picks, a quick refresher on the FFPC Main Event format:

* Compete in your 12-team league for the first 14 weeks, with the goal of advancing to the Championship Round.

** The Championship Round runs from Weeks 15 through 17 and is a total points race. The team with the most points in those 3 weeks -- plus their weekly average during the regular season -- wins the $500,000 grand prize.

This was a stress-free turn. I had 11 players queued up for my 1st-rounder. Ten left the board before my pick. But I was pumped to land Hill, who was actually 8th on that queue. We project him for the 3rd most points among non-QBs in this format.

There wasn’t much of a decision for me at 2.02, either. I was hoping for Stefon Diggs or Barkley -- so I was happy to see Calvin Ridley go at the 2.01.

Barkley obviously carries risk coming off the torn ACL. But reports have been positive lately. And, unlike the other backs still on the board here, Barkley has top-3 fantasy upside. He’s the type of pick that could win me the $500,000 -- especially as a 2nd-rounder.

Picking at the back of the draft is tough in spots. (More on that later.) But I do like this late-3rd-round/early-4th-round area. There are a bunch of quality WRs to choose from, likely a strong TE or 2, and even some viable RBs if you wanna go that route.

I figured I was going WR/WR or WR/TE here, unless I opened with 2 straight WRs. So with Barkley on board, I wasn’t considering RB here.

I went Kupp at 3.11 because I wanted to come out of these 2 picks with at least 1 WR. Had I gone Hockenson or Pitts, Team 12 could have snagged Kupp and Lockett. He was much less likely to take both of those TEs.

This is the particular spot that’s tough in most of these FFPC drafts. The RBs are littered with question marks, and even the WRs aren’t super appealing. I was hoping to land Jerry Jeudy here, but he’s regularly going in the early 5th round of these high-stakes drafts now.

Anderson was a fairly easy pick. This is a little ahead of his ADP -- but not ahead of where he sits in our rankings.

QBs tend to drop in these drafts, and I have concerns about Jackson with all of the WR injuries in Baltimore. So I think passing on him was the right call.

The optimal move might have been RB here, though. None of those 6 guys I listed were likely to make it back to me in the 7th (and didn’t). And, as much as I like Boyd, there’s not a huge dropoff between him and the WRs generally available in the 7th and 8th.

I wanted to wait longer at QB. I really did. But I couldn’t pass on Dak here. If healthy -- and recent news has been positive -- he has the potential to at least score with guys like Kyler Murray and Lamar Jackson, if not Patrick Mahomes and Josh Allen. And with Russell Wilson and Aaron Rodgers coming off the board a few picks in front of me, there was a significant tier drop behind Prescott.

Then it was time to start hammering RBs. Is this early for Michel? Maybe. I’m honestly not sure because his ADP hasn’t settled post-trade. But I think this is the range he should be going now. I think, worst case, Michel gets 8-12 touches per game, including some goal-line work. And the upside is that he becomes the lead back on a top-5 offense.

Williams has been 1 of my favorite PPR RB values all offseason. His stock has only risen with news that D’Andre Swift’s early-season status is murky. I expect Williams to have standalone fantasy value even behind a healthy Swift. And Williams will turn into a solid RB2 if Swift misses time.

I’ve cooled on Fournette with it looking like Gio Bernard will at least open the season as Tampa’s lead pass-catching back. But there’s still a super high ceiling here. Fournette is the 1 Bucs RB with the skill set to lead the backfield in both carries and targets. I also thought he was a good fit on this team with plus matchups vs. the Cowboys and Falcons to open the season. That could be important if Saquon gets off to a slow start.

After Gus Edwards left the board a couple of picks ahead of me, there were no other RBs I was interested in here. So I pivoted back to WR.

I don’t love Parker, the player. But I’m buying this Dolphins passing game in year 2 of Tua Tagovailoa. And Parker should be a significant part of it.

Edwards is 1 of my favorite breakout candidates at WR. Find out why in Top 10 Fantasy Football Sleepers.

I passed on WRs higher in our rankings for Bateman here. Why? Because upside is basically all I care about at this point. I’ll need to wait as the rookie recovers from core-muscle surgery. But he has the potential to emerge as a weekly starter for me over the 2nd half of the season.

Locking up Hockenson early allowed me to be flexible at TE2, simply waiting for value to present itself. Henry was a value here, about a round and a half past ADP.

Miami’s backfield is a giant question mark right now. That actually makes it a good situation to invest in late in drafts. Ahmed has looked good this preseason, especially in the passing game.

If you follow me on Twitter, you’ve probably seen me hyping Valdes-Scantling. It’s not just me, though. Packers beat writers and, most importantly, Aaron Rodgers have been signing his praises throughout August. I think he should be going 3-4 rounds earlier than this.

Johnson might open the season as a top 2 back for the Jets, ahead of Michael Carter. We’ll see where the backfield goes from there.

I’ll use the Broncos defense in Week 1 vs. the Giants, potentially in Week 2 vs. the Jaguars -- and then dump them and play matchups at DST the rest of the way.

Hill has seemingly locked up the Packers’ #3 RB job with a strong preseason. An Aaron Jones injury could thrust Hill into a significant role, especially in the passing game.

Gay kicks for what I expect to be a strong Rams offense.