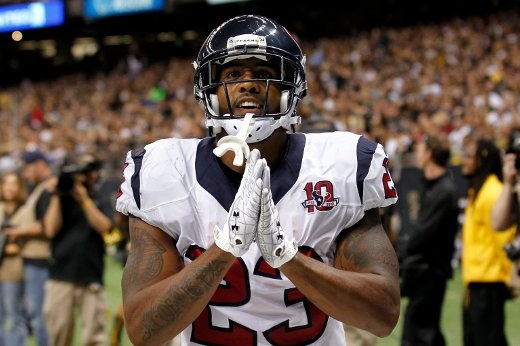 The fine folks at Fantasy Mojo and the FFPC were kind enough to invite me back for another year in the Pros vs. Joes competition – despite the fact that I’ve generally sucked in this format.

For whatever reason – maybe it’s the 1.5 PPR for TEs, or the 2 flex spots – I haven’t had much success in FFPC-style leagues. So I went into this year’s draft with a pretty firm game plan: Adhere to the principles we laid out in our MFL10 Draft Strategy Guide. Like MFL10s, Pros vs. Joes is a best-ball league.

I made some adjustments, of course, to account for the different scoring system and starting lineup requirements. TEs moved up my MVP Board with the 1.5 PPR. So did RBs, considering you can start 4 of them. But those changes actually fall right in line with the overall MFL10 strategy.

Here’s a pick-by-pick recap of a draft I left very happy with.

View the full draft board

There’s another C.J. Anderson fanatic out there. He was my target here, but he went at 1.07. I also missed by just 1 spot on Eddie Lacy. So I settle for Foster, who we have projected 3rd among RBs in fantasy points per game. He finished 4th last year.

Murray and Jeremy Hill, who are exactly tied in our PPR rankings, were both available here. I’m taking Murray every time between those 2. His upside in HC Chip Kelly’s fast-paced, run-heavy offense extends well beyond our projections.

Ecstatic to see Gore here. The only semi-legitimate argument against him is that he turned 32 this offseason. But he’s already proven to be an exception to the RB-age rule by producing top-24 seasons at 30 and 31.

Now he joins a Colts offense that’s made Ahmad Bradshaw, Dan Herron and Donald freakin’ Brown fantasy factors over the past 2 years. Gore has RB1 upside in Indianapolis.

I would have strongly considered Kelce in the 3rd round if Gore hadn’t made it to me. Getting him in the 4 th is big-time value. In the other Pros vs. Joes drafts so far, he’s gone at 3.02 and 3.09.

With the 1.5 PPR for TEs, we project Kelce to score 243.5 fantasy points. That’d land him 15 th among WRs. So I’m essentially getting a high-end WR2 to use in my TE spot.

Evidently, I like the risk/reward equation of Gurley more than most, because he’s been ending up on a bunch of my teams recently.

There’s no arguing the downside with a guy coming off a shredded knee who’s never played a down of NFL football. But I think that risk is baked into a 5 th-round price tag. If Gurley struggles returning from the injury and never ascends beyond low-end RB2 status this season, it doesn’t crush my team.

But if he returns to the form that saw him dominate SEC competition the past 3 years, he could be a league-winner.

I’m not expecting Tate to match last year’s 99-1,331-4 line and 12 th-place PPR finish. A whopping 45% of his production came in 5 games with Calvin Johnson out or limited.

But his numbers in the other 11 games were still good for 25th among WRs. Tate went for 89+ yards in 4 of those 11 outings. He’s a solid WR2 with WR1 upside if Johnson misses more time this year.

Johnson is an ideal upside play for a team that went RB-heavy early. He’s an ascending 26-year-old who goes 6’2, 218 pounds with 4.4 speed. Vikings OC Norv Turner has been talking Johnson up all offseason. I’m banking on him leading a burgeoning passing game in catches, yards and TDs this year.

V-Jax ranked a solid 27th in catches and 21st in receiving yards among WRs last year. He got unlucky to score just 2 TDs. Expect him to rebound into the 7-8 range that he was in during his first 2 years in Tampa Bay.

Jackson is a safe bet for WR3 production and could bust back into the top 25 if QB Jameis Winston settles in quickly.

This is a nice WR4, especially after starting the draft with 4 RBs and a TE. Decker ranked 26 th among WRs in PPR points last year. He’ll need to contend for targets with WR Brandon Marshall this season, but don’t be surprised if Decker sticks as the top option in the passing game. The entire unit will get a boost from the underrated arrival of OC Chan Gailey.

This is the 1st time I strongly considered taking a QB: Ryan Tannehill, Eli Manning or Tony Romo. But I decided to push my luck, wait another round on QB and take Mathews. He’s a high-upside handcuff for DeMarco Murray and might even start for my squad alongside Murray in games when the Eagles go especially run heavy.

Here’s the pick I most regret.

Tannehill, Manning and Romo all flew off the board between my 10 th and 11th rounders. That left Tom Brady atop my QB rankings. But the 3 teams picking between my 11th and 12th rounders all had QBs. So I rolled the dice and gambled that Brady would make it back to me …

Brady came off the board a couple of picks ahead of me to the team that selected Matt Ryan in the 8 th. I’m OK with Rivers as my QB1 – he’s been a top 12 fantasy QB in 6 of the last 7 seasons and could make it 7 of 8 if he stays healthy in 2015 – but I don’t think he has Brady’s upside.

Speaking of upside, Bradford has plenty of it.

Whether you think the guy’s a quality QB doesn’t matter much. HC Chip Kelly has proven capable of getting production from whoever is under center. Michael Vick and Nick Foles combined for QB3 numbers back in 2013. Foles and Mark Sanchez’s total production last year would have ranked 8 th.

Bradford is a strong bet for top-10 production whenever he’s on the field this year.

Surprised Reed isn’t getting more love. He ranked 8th among TEs in fantasy points per game in FFPC scoring in 2013 and 16 th this past year (despite not scoring a single TD).

Sure, he’s a big injury risk. But that’s mostly negated by the best-ball format and this 14 th-round price tag. For what it’s worth, Reed went in the 12th and 13th rounds, respectively, in the 2 Pros vs. Joes drafts after this one.

Some schmuck tweeted earlier this week that the Rams haven’t produced a top-40 PPR WR in 4 seasons. Quick has a shot to bust that slump in 2015.

He appeared primed for a 3rd-year breakout last year, racking up 24 catches, 365 yards and 3 scores through 7 games. Quick was sitting 34 th among WRs in PPR scoring at that point. Then he suffered a season-ending shoulder injury in Week 8.

Quick is on track to be ready for the 2015 opener, though. And he could beat last year’s pace with a QB upgrade in Nick Foles.

I’m slowly coming around to the idea of Funchess making a year 1 impact. He’s a similar prospect to Kelvin Benjamin, who just posted a top-15 PPR season as a rookie in the same offense. Don’t expect Funchess to finish anywhere close to that high in 2015, but the 6’4, 232-pounder could score a handful of TDs and start for this fantasy squad a few times.

I must have West on 75% of my teams so far. Not because I think he’s the favorite to lead the 2015 Browns in carries, but because he has a much better chance of doing so than his price tag would suggest. In this draft, for example, he went 9 rounds after Isaiah Crowell and Duke Johnson.

Gotta go a little earlier than usual on DEFs in these drafts. Eight were already off the board at this point.

The Fins have averaged a little more than 40 sacks over the past 3 years and added that Ndamukong Suh guy this offseason.

A handcuff for Jordan Reed. With Reed out for all or most of the first 4 games last season, Paul compiled 21 catches, 313 yards and a score. He ranked 6th among TEs in FFPC scoring over that span.

I compiled a stable of 4 workhorse RBs that should carry this team, plus a stud TE.

It’s quantity over quality at WR. Do I have a top-12 guy? Probably not. But I should have 4, 5, maybe even 6 top-30 WRs. Then a few more who will hopefully contribute a handful of starter weeks.

That’s right. 3 DEFs and 4 Ks. The evidence is overwhelmingly in favor of drafting 3 DEFs in MFL10 best-ball leagues. I don’t see why this setup would be any different.

We don’t have data on Ks because MFL10s don’t use them. But the concept should be the same. Like DEFs, K is an unpredictable and volatile position from week to week. By rostering 4, we’re taking advantage of that volatility and hopefully getting 1 big producer every week.

I was the only team in this draft to select 4 Ks, so it’s a differentiating factor that could give me an edge.