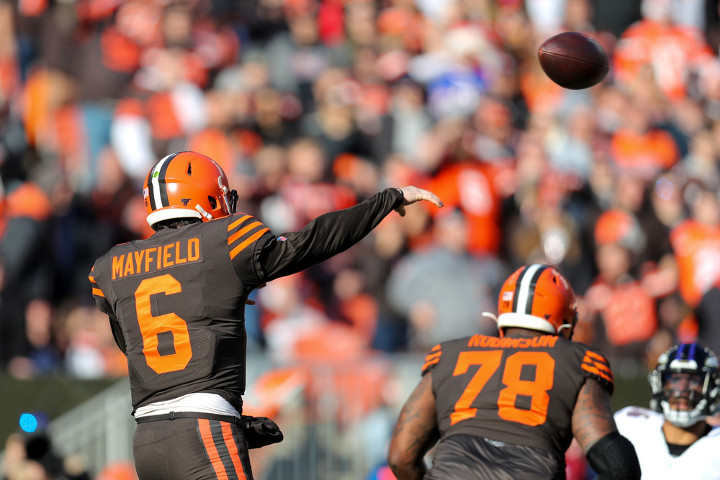 You know about Lamar Jackson’s 2019 dominance. But did you know his 415.7 fantasy points ranked 2nd most all-time? Only Jackson, Patrick Mahomes (2018) and Peyton Manning (2013) have topped 400 fantasy points in a season.

Missed out on Lamar at his Round 10 ADP? Bummer. But you still could have landed a guy we touted last year in both our QB Strategy Guide and our 2019 Stealing a Top-10 QB piece: Dak Prescott. Another Round 10 pick, Dak finished as the QB2 behind Jackson. That marked his 4th straight top-12 finish.

Those guys stole headlines. Here are the others worth highlighting from 2019:

So which QBs are ready to return a big profit in 2020? Here are 5 cheap candidates with QB1 upside ...

His 21 INTs ranked 2nd most league-wide. Per Pro Football Reference, only 70.6% of his passes were charted as “on target.” Among qualifiers, only Jameis Winston posted a worse rate. Mayfield reached 300 passing yards 3 times all year; 3 passing scores just twice.

Now, Mayfield gets to reset with a new coaching staff. HC Kevin Stefanski will orchestrate a run-balanced offense heavy on play-action. Kirk Cousins ranked 5th in the league in play-action percentage last year (31.4%) — not too far ahead of Mayfield at 28.7%. The youngster really excelled in such situations, with play-action boosting Mayfield’s completion rate by a league-high 10.1%. Huge.

So, yes, volume looks suspect on an offense featuring Nick Chubb and Kareem Hunt. But Mayfield's efficiency should improve dramatically under a likely play-calling upgrade. Remember that Mayfield exited the college ranks as an ultra-accurate passer; his 80.6% adjusted completion rate led the 2018 rookie class.

Cleveland reinforced a shaky O-line by adding RT Jack Conklin in free agency and Alabama LT Jedrick Wills in Round 1 of the draft. 2019 OTs Greg Robinson and Chris Hubbard were essentially replacement-level performers.

Given that, Mayfield’s 2.3-second average time to throw figures to improve. Per PFR, that figured tied for lowest in the league.

Jarvis Landry has an outside chance of missing Week 1 following offseason hip surgery, but for now he looks fine for the opener. Getting healthy versions of Odell Beckham and David Njoku — plus signing reliable Austin Hooper — gives this unit the talent to foster a highly efficient passing season.

The Patriots paid Newton like a kicker on a short leash (1-year, $1.05 million base). But go ahead and pencil him in as New England’s Week 1 starter over Jarrett Stidham.

Our case for him isn’t complicated. The 245-pounder owns 58 career rushing TDs. Forty-one of them have come from the 5-yard line or closer. He’s a massive goal line back on a team whose primary goal-line option, Sony Michel, is starting training camp on the PUP list after May foot surgery.

The supporting cast is a bit of a concern. 22-year-old N’Keal Harry brings theoretical upside as a 2nd-year Round 1 pick, but he caught 12 of 24 targets across 7 games in 2019. At least he’s healthy entering training camp.

Mohamed Sanu is currently on the active/PUP list due to an ankle injury, although he’s not expected to be there long. Sanu suffered a high-ankle sprain shortly after New England shipped a Round 2 pick to acquire him last fall. Still, at 30, it’s unlikely we see his best.

So the Pats figure to rely heavily on Newton’s legs, especially with no long-term commitment between team and player. Another 90+ carry season -- a number he reached in 8 straight seasons from 2011-2018 — is well within his range of outcomes. That type of volume automatically boosts his QB1 ceiling.

Yes, rookies are at a disadvantage this offseason. And yes, rookie QBs face a particularly rocky road.

Burrow simply isn’t your average prospect. I laid out his resume prior to the draft, which includes the greatest passing season we’ve ever seen from a college QB. He’s also on the older side for a rookie at 23.

And while the Bengals selected him 1st overall, their supporting cast doesn’t reflect the draft position. A.J. Green returns after a lost 2019. Entering a contract year, he’ll look to remain a lethal downfield threat. His latest sample — from 2018 — turned up 69+ yards in 7 of 8 full games. We wouldn’t yet call him washed.

Joe Mixon provides dynamic ability out of the backfield. And the return of LT Jonah Williams — who missed all of his rookie year with a shoulder injury — should upgrade the line.

Minshew was placed on the reserve/COVID-19 list, meaning he either contracted the virus or came into contact with someone who has. That bears monitoring, but he should be fine for Week 1.

So, we’re talking about a 2nd-year passer — who as a rookie edged Tom Brady in fantasy points per game — now entering his first training camp as starter. Jacksonville returns its top-4 WRs, headlined by emerging star D.J. Chark. They added a WR1 talent in run-after-catch specialist Laviska Shenault in Round 2 of the draft.

While growing pains are expected for a young offense, Minshew brings rushing ability to lean on. His 49 scrambles — scattered across 14 games — led all QBs. Minshew ranked 5th at the position in rushing yards yet never found the end zone. That’ll likely change this fall.

Let’s start with the player.

In 9 appearances as a Saint last year, Bridgewater posted an elite 80.6% adjusted completion rate. That number makes sense when you consider his league-low 6.1-yard average depth of throw. (It’s also nothing new for the 27-year-old.)

Bridgewater deserves some attention as a rusher, too. While his nasty 2016 knee injury might stick in your head, note that he recorded 9 red zone rushes as a Saint. Fourteen QBs beat that number, but again, Bridgewater made just 9 appearances.

Then there’s the coaching staff. It’s a major X factor with HC Matt Rhule and OC Joe Brady bringing little pro experience. Brady at least has a season with Bridgewater (2018 in New Orleans) under his belt. And it’s clear Rhule has high expectations from the former LSU play-caller.

“For being such a young guy, he is a football grinder,” Rhule said of Brady, per ESPN. “A lot of guys, they have a system and they’re so smart — Joe’s a grinder. He’s constantly working on football, and I think the players recognize that. The reason why I wanted to hire Joe was (that) at LSU, he ran a version of the Saints’ system. As a college coach, I studied NFL tape all the time. Obviously, with them being in the NFC South, I have so much respect for Sean Payton, their system, their ability to consistently execute and play at the highest of levels. And so you see Joe with his own take put on something that’s really strong fundamentally and sound fundamentally.”

Carolina has the firepower to effectively run Brady’s spread offense. That’s vital considering what projects as a bottom-barrel defense and a division with 3 loaded offenses. Game flow -- and hence, volume -- should be on Bridgewater's side this year.