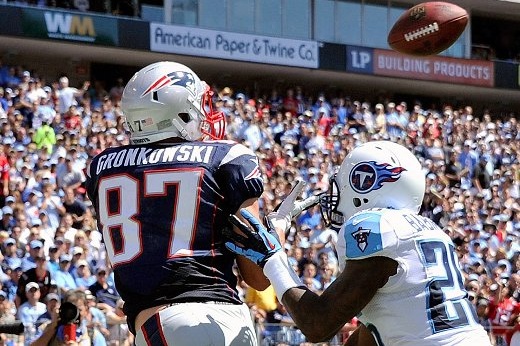 Johnny Manziel reportedly regressed late this spring, and the team has already become concerned with his off-field antics. Hoyer opened camp as the starting QB and now looks like the favorite to be under center for the opener. We’re still expecting Manziel to start more games than Hoyer this season, though. We’re ignoring Hoyer in fantasy drafts.

Rice got off easy with a 2-game suspension for his domestic assault incident. Our original projections had him missing 3 games, so he got a slight boost. We’re still not interested in Rice as more than a RB3 or flex, though. And the short suspension figures to raise his ADP from its current 7th-round placement.

Seemingly entrenched as the Bengals’ #2 RB, Hill is set to play a significant role in 2014. Insider Geoff Hobson believes the rookie could see around 200 carries. We have him projected for 154. Even if he hits that mark, he’ll be a sweet value at his current 12th-round ADP.

All signs continue to point toward a full-fledged battle for the starting RB job in Cleveland. That makes West a much better draft target at his 10th-round ADP than Ben Tate in the 6th. West made headlines earlier this week when he opened camp on the Non-Football Injury list, but he was at practice on Friday.

Vick Ballard’s torn Achilles locks in Bradshaw as Indy’s #2 RB. That spot might still leave him short of fantasy-starter value. But Bradshaw could be the Colts’ lead back by October if Trent Richardson continues to struggle.

Wilson (neck) received full medical clearance on Monday and has already been impressing in camp. He’s listed as the #2 RB on the Giants’ initial depth chart. We’re not expecting Wilson to pass Rashad Jennings for the lead role, but 8-10 change-of-pace touches per game could make him an intriguing RB3 or flex option.

Riddick opened camp as Detroit’s #3 RB, and there continues to be talk that he could play a Darren Sproles-type role this season. We talked about Riddick’s fantasy outlook in Thursday’s podcast.

More White hype this week, this time from Patriots RBs coach Ivan Frears. The rookie certainly looks like a candidate for a significant role this season. We’ll be keeping a close eye on the Pats backfield. For now, White qualifies as an intriguing late-round flier.

Kearse is now the favorite for the #3 WR job in Seattle after Sidney Rice’s retirement. That spot is unlikely to yield fantasy value in the Seahawks’ run-first offense. But an injury to Percy Harvin or Doug Baldwin would make Kearse an intriguing sleeper.

Thompkins is taking advantage of Aaron Dobson’s absence early in camp. Of course, he impressed last summer too before fizzling out during the season. But Thompkins is still in the mix for a significant 2014 role, especially if Dobson remains sidelined.

Gronkowski avoided the PUP list to start training camp. He’s been limited to individual drills so far, but it’s encouraging that he’s even out there at all just 7-and-a-half months removed from tearing his ACL and MCL. Gronk appears on track to be ready for Week 1 but remains one of the riskiest early-round picks in fantasy drafts.

Kelce was ready to go for the start of camp this week, practicing without a brace on his surgically repaired knee. If he can return to pre-injury form, he should emerge as Kansas City's lead pass-catching TE. That’d give Kelce TE1 upside.

Manziel reportedly regressed late in spring practices and has “lost ground” in his battle for the starting job. Hoyer looks like the favorite to be under center come Week 1, although we’d still bet on Manziel starting more games. The rookie still carries intriguing fantasy upside but is just a low-end QB2 for now.

Pierce got a slight bump down our rankings when Ray Rice’s lenient 2-game suspension was announced. We still like Pierce at his 11th-round ADP. He’s the strong favorite to serve as Baltimore’s lead back while Rice is out, and he could play a significant role even when Rice returns.

Stewart will miss the first 1-2 weeks of training camp with a hamstring injury. That's not a big deal by itself. But hammies tend to be tricky. And we're talking about a guy who's struggled staying healthy throughout his career. Stewart can’t be considered more than a late-round flier at this point.

Leshoure is currently 4th on the depth chart, firmly behind Reggie Bush, Joique Bell and Theo Riddick. Insider Justin Rogers tweeted Friday that Leshoure “won’t have any role… unless there’s an injury.” You can safely ignore Leshoure in fantasy drafts.

Ballard tore his Achilles in Friday’s practice and is likely done for the season.

Sanders was suspended 4 games for violating the league's substance abuse policy. Expected to be Jacksonville's #4 WR this season, Sanders was off the fantasy radar even before this suspension.

After a disappointing spring, Robinson is listed 5th on New York’s initial depth chart. It’s still early, but Robinson has yet to show anything to suggest he’s ready to be a fantasy factor this season. We’re not bothering with him in drafts right now.