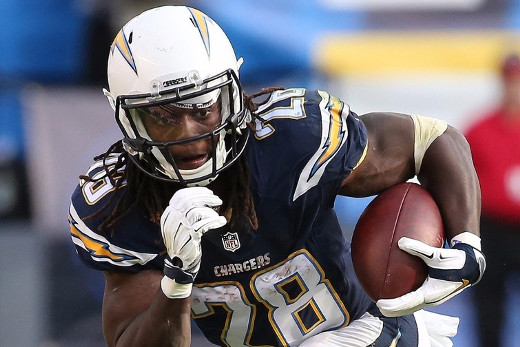 Tyreek Hill avoiding a suspension returns Mahomes’ ceiling what we saw last year.We increased the gap between him and #2 QB Deshaun Watson in our rankings.

Red flags went up when we learned that Guice suffered a hamstring injury earlier this month.But he was a full-go to open training camp.A healthy Guice is a good bet to emerge as Washington’s lead back.

These guys figure to form a committee attack if Melvin Gordon’s holdout extends into the regular season.In the 3 games Ekeler and Jackson played together without Gordon last year, Ekeler tallied 40 carries and 20 targets vs. Jackson’s 17 carries and 4 targets.We’ll watch both guys’ usage this preseason.It’s worth noting that HC Anthony Lynn told NFL Network's Michael Silver that he's "looking for big things" from Jackson.

He avoided the PUP list after missing the spring with a torn pectoral. Jerick McKinnon, meanwhile, was PUPed with a "flare-up" in his surgically repaired knee. Breida has a chance to make a move up the depth chart following an impressive 2018 campaign.

Sony Michel opened camp on the PUP list with his knee trouble, giving Harris more time to work with the 1st-team offense.He reportedly had an impressive spring and has a real shot to carve out a significant role in the always-productive Pats backfield.

He dodged an NFL suspension, vaulting him back up into the top 6 in our WR rankings.Hill has an ADP of 16th overall in DRAFT best balls over the past week.

He avoided the PUP list to open training camp, putting him on track to play Week 1.Kupp ranked 15th among WRs in PPR points per game last year after finishing 25th in total PPR points as a rookie.

Sanders is well ahead of where we thought he’d be after last December’s torn Achilles.He avoided the PUP list to open training camp and took part in 7-on-7 drills on Wednesday.He’s on track to play Week 1.And if he regains something close to pre-injury form, he’ll be the favorite to lead Denver in targets.

His holdout is underway.We’d still be surprised if it ran into the regular season — but it’s certainly not out of the realm of possibility, as ESPN’s Adam Schefter reported Friday.Gordon also becomes a bigger injury risk the longer he stays away from camp.Check out this article on holdouts we posted around this time last year.

He remains sidelined after offseason surgery on his troublesome left knee.Michel tore the ACL in that knee in high school, had left knee surgery last August and then missed 2 games with left knee trouble in the middle of the season.He’s a risky pick at his 5th-round ADP.

The spring buzz on Jones has seemingly worn off.Multiple Bucs insiders have stated over the past week that Peyton Barber remains the favorite to lead the team in carries this season.The Pewter Report’s Mark Cook wrote that Jones will ideally become a “dependable complimentary back that can be the home run threat and receiver out of the backfield.”

He was placed on the PUP list after experiencing what insider Matt Maiocco called a "flare-up" in his surgically repaired knee. Maiocco added that McKinnon "should be ready soon" -- but he's a risky fantasy pick until we see him back on the field.

We sliced some targets from Watkins’ projections with Tyreek Hill avoiding a suspension.Remember, though, that Watkins’ PPR scoring average in his 8 healthy games last year would have ranked 24th among WRs.So he’s still a nice fantasy asset even with Hill eligible for all 16 games.

He broke his thumb in Thursday’s training camp practice and is considered “week to week.”ESPN’s Jordan Ranaan tweeted that there’s “optimism” that Shepard will be back for the season opener, but we nudged him down the WR rankings a few spots.

Metcalf flashed throughout the spring but reportedly arrives to training camp behind Tyler Lockett, David Moore and Jaron Brown on the depth chart.We’ll see if the rookie can make a push, but he shouldn’t be drafted as more than a late-round flier right now.

He’s not ready for the start of training camp, despite being 11 months removed from his left knee injury.Lee’s availability for Week 1 is uncertain.He’s not worth a pick in drafts right now.

He'll miss the entire season after tearing an ACL on Thursday. Rookie Darius Slayton, Cody Latimer, Bennie Fowler and Russell Shepard will now duke it out for the #3 WR job. None is worth a pick in fantasy drafts.