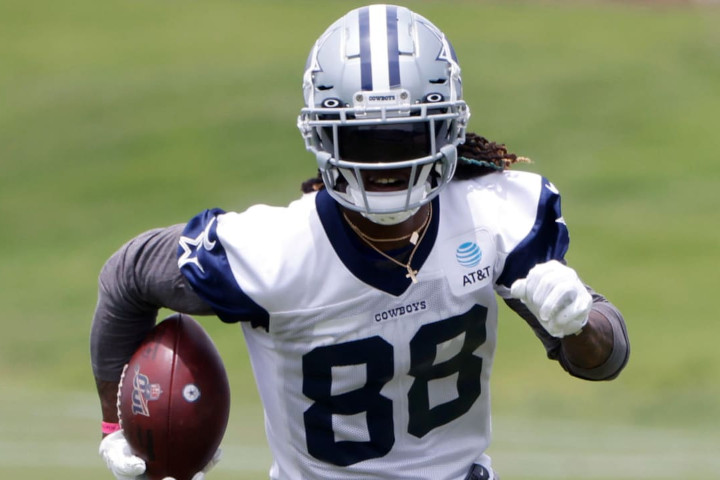 After agreeing to a deal that will likely make 2021 his final season in Green Bay, Rodgers showed up for the start of training camp. So after an offseason of uncertainty, we now know that Rodgers will be on the field this year. He’s coming off an impressive 2020 campaign that saw him finish 3rd among QBs in fantasy points.

Burrow avoided the PUP list to open training camp, another step in what’s seemingly been a smooth recovery from last November’s torn ACL and MCL. Barring a setback, he’ll be ready to go for Cincinnati’s opener vs. the Vikings.

Concerns about what Green Bay’s Rodgers-less offense would look like are gone. Jones is coming off an RB5 fantasy finish in 2020 and could see more volume this year -- especially in the passing game -- with Jamaal Williams gone.

Same deal with Adams. His fantasy stock would have taken a significant hit with Jordan Love under center. But he’s back with Rodgers for at least 1 more year and now sits 2nd in the WR Rankings.

Lamb is off to a flying start at camp -- while Amari Cooper remains sidelined after January ankle surgery. It’s certainly possible that Lamb emerges as the #1 WR in Dallas’ high-octane passing game this year.

The Boston Herald’s Andrew Callahan became the latest Patriots beat writer to pump up Meyers this week, calling him a potential breakout and the team’s best receiver this spring. We’ll see how free-agent acquisitions Nelson Agholor and Kendrick Bourne fare over the next month, but Meyers could certainly lead the group in targets.

Cobb goes from likely QB purgatory in Houston to a reunion with Aaron Rodgers in Green Bay. Rodgers will assuredly push for Cobb to be the team’s primary slot receiver this season. And he has a shot to finish 2nd on the team in targets.

Cobb’s departure from Houston makes Miller, who was traded from Chicago earlier this week, the favorite to win the Texans’ slot receiver job. That still doesn’t look like an exciting spot for fantasy production, but Miller is at least worth monitoring over the next month.

Cole has worked with the 1st-team offense throughout the spring and in training camp so far. He’s the favorite to open the season as New York’s starting outside WR opposite Corey Davis. It makes Cole worth a look near the end of deeper fantasy drafts.

He signed with Minnesota this week and immediately becomes the favorite for the #3 WR job. But in a run-heavy offense that features a bunch of 2-TE sets, Westbrook would still need a Justin Jefferson or Adam Thielen injury to hit the fantasy radar.

The rookie had a buzzy spring and worked with the 1st-team offense in Wednesday’s 1st training-camp practice. We rarely see rookie TEs make significant fantasy impacts -- but it’s at least time to consider the possibility that Granson will be an exception.

Wentz suffered a foot injury near the end of Thursday’s practice and underwent testing on Friday. We’re still awaiting the results of those tests -- but insider Michael Silver hears that the team is “bracing” for surgery.

After reportedly being hobbled in spring workouts, Cohen opened training camp on the PUP list as he continues to recover from last September’s torn ACL. We’re guessing that he’ll be ready for the start of the season, but Cohen comes with elevated risk until we see him back on the field.

Cooper landed on the PUP list to open training camp, and owner Jerry Jones said he doesn’t expect Cooper to practice until mid-August. The team still doesn’t sound very concerned about him, but it sure seems like his recovery from January ankle surgery has taken longer than expected.

These guys were likely set to battle for the starting slot receiver job -- but that now figures to go to Aaron Rodgers’ pal, Randall Cobb. We’ll see if either Lazard or Rodgers can push Marquez Valdes-Scantling for the outside spot opposite Davante Adams.

The New York Post's Ryan Dunleavy expects Sterling Shepard to be the Giants’ primary slot receiver this season. If that’s the case, Toney will be no better than #4 on the depth chart because he won’t see much, if any, time on the outside. The rookie is only worth a look in best-ball drafts of 20+ rounds.

Mims didn’t get much work with the starters this spring. And that’s continued in training camp. He was actually working with the 3rd team in Friday’s practice. We’ll see if Mims can make a move up the depth chart, but he’s not worth rostering in redraft leagues as of now.

Watson is expected to miss 4 months after undergoing knee surgery. He’s well off the redraft radar. Scotty Miller, Tyler Johnson and rookie Jaelon Darden will duke it out for Tampa’s #4 WR job over the next month.

After a rough spring, Herndon opened training camp with the 2nd-string offense. TE Tyler Kroft is working with the starters. There’s still time for Herndon to win the starting job, but there are better late-round flier TEs in fantasy drafts right now.