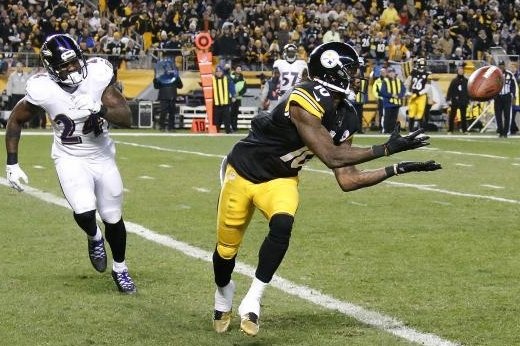 Bell’s suspension was dropped from 3 games to 2 -- a significant 33% reduction. That extra game moved him up to #1 in our non-PPR RB Rankings. (He was already there in PPR.) Bell is a viable option with the 1st overall pick across fantasy formats.

While teammate Darren McFadden opened camp on the PUP list with more hamstring trouble, Randle drew praise from owner Jerry Jones. He’s clearly in the lead for the starting job, a role that’d give him plenty of fantasy upside. Randle’s price continues to rise, though. His recent MFL10 ADP has crept into the 4th round.

Tough to hop on Twitter and not see Bryant hype nowadays. Yahoo’s Charles Robinson believes the 2 nd-year WR is “going to be a star.” Former college teammate QB Tajh Boyd sees Pro Bowl potential. Bryant has reportedly packed on 15 pounds and is tearing up the practice field. There’s still upside beyond where he sits in our WR Rankings.

Woods is expected to stick as Buffalo’s #2 WR ahead of Percy Harvin, per insider Vic Carucci. That nudges Woods up the rankings, but he still sits outside the top 60 across formats. He’ll struggle for consistent targets as a secondary option on a run-heavy offense.

Wilson opened camp as the #2 WR. He’ll need to hold off talented rookie Chris Conley, who is currently missing time with a minor knee injury. Wilson is a smallish 5’9, 200-pounder, but he’s a plus athlete and caught 12 balls over last year’s final 4 games. He’s worth tracking in deeper leagues.

Wright is in the lead for Minnesota’s #3, slot receiver job. He’s been efficient through 3 pro seasons, hauling in 63.8% of his targets and averaging 14.8 yards per catch. But the #3 job is unlikely to bring him enough targets to be a reliable fantasy option.

Jones reportedly passed on offers from the Eagles, Chiefs, Seahawks and Bengals to sign with the G-Men. When the Giants’ WR corps is healthy, Jones will likely sit 4th on the depth chart. But Victor Cruz is recovering from a nasty knee injury, and Odell Beckham has had hamstring trouble. If either misses time, Jones could emerge as a spot starter.

While WR Brandon LaFell continues to miss time with a foot injury, Dobson reported to camp in “great” shape and “put himself in a great position.” That comes straight from HC Bill Belichick. Dobson has disappointed through 2 pro seasons but just turned 24, was a 2nd-round pick and goes 6'3, 205 pounds with above-average athleticism. He’s worth keeping an eye on.

Gresham inked a deal with Arizona, where he’ll compete for targets with Troy Niklas in an offense that doesn’t feature the TE in its passing game. Gresham is also on the PUP list as he recovers from offseason back surgery. There’s not much fantasy appeal here.

Here’s a shocker: McFadden is missing time with an injury. This time it’s a hamstring. And it’s reportedly the opposite hammy from the one that sidelined him this spring. McFadden needs to get healthy in a hurry if he wants to push Randle for the lead job.

Williams’ cameo in Pittsburgh’s starting lineup was cut from 3 games to 2 with the reduction of Le’Veon Bell’s suspension. Williams is still a top-end handcuff, though, considering Bell’s injury risk.

Bills insider Vic Carucci does not expect Harvin to have a "major role" in the offense this season. Harvin has reportedly struggled with route-running and could end up in a “gadget-type” role. That’d make him tough to rely on in fantasy lineups.

Conley is missing time with a knee strain. There’s no timetable for his return. The rookie needs to get on the field if he wants to earn a significant early-season role. Conley is only worth considering in deep best-ball leagues right now.

Ankle trouble cost Niklas 9 games last year and most of this offseason. Now he’ll need to contend with TE Jermaine Gresham. Niklas is off the redraft radar.

Hurting at TE? We've got 2 guys to go trade for right now. Plus 9 more names to buy, sell or hold.