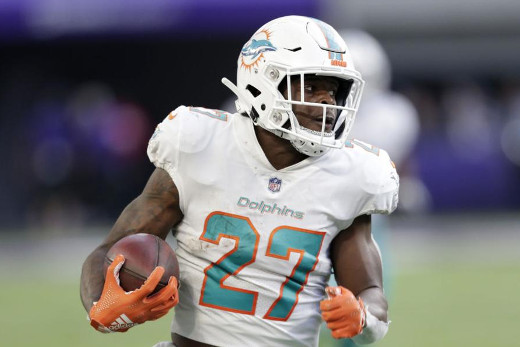 Fitzpatrick has been taking most of the 1st-team reps early in camp, and HC Brian Flores came right out and said that he’s the “clear” leader in the QB race. There’s still time for QB Josh Rosen to make a move, of course. Don’t spend a pick on either Fins QB if you’re drafting in the next week.

He’s been running ahead of Kenyan Drake so far. ESPN’s Cameron Wolfe projected 175 total touches for Ballage this year, which would have ranked 28th among RBs last season. We’ll be keeping a close eye on this situation during preseason action, but Ballage is certainly worth a shot at his current 12th-round ADP.

He’s been consistently running with the 1st-team offense in camp so far and has built a “strong rapport” with QB Ben Roethlisberger, according the Pittsburgh Post-Gazette's Ray Fittipaldo. Moncrief looks like the clear favorite to open the season as the Steelers’ #2 WR.

Jones, not Robert Foster, has been taking the majority of the 1st-team reps at camp alongside WRs John Brown and Cole Beasley. We’re not handing that job to Jones just yet, but we did move him ahead of Foster in the WR rankings for now.

He’s been the early star of Ravens camp. We’ll see how this WR corps shakes out now that Marquise Brown is back. But there’s room for both rookies to start in 3-WR sets this season.

Virtually everyone who covers the Pats has called Harris the team’s best WR in camp so far. (Julian Edelman, of course, is sidelined with his broken thumb.) We’ll see if 1st-round rookie WR N’Keal Harry makes a move up the depth chart, but Harris has certainly become a guy to monitor.

He’s passed Antonio Callaway for the #3 spot on the depth chart right now. The battle isn’t over yet, but Higgins will be a late-round consideration if he hangs on to that job.

We already had him projected for the 4th most targets among TEs, but Engram should be even busier early in the season with WR Golden Tate’s 4-game suspension.

Dissly avoided the PUP list to open training camp after last September’s torn patellar tendon and has even been participating in team drills. He’s seemingly on track to play Week 1 and could emerge as a spot-start option.

He’s struggled early in camp and is behind Ryan Fitzpatrick on the depth chart. Rosen is obviously well off the fantasy radar right now.

It sounds like Miami is planning on more of a committee backfield than we initially anticipated. Of course, Drake turned just 173 touches into a 14th-place PPR finish last year. We moved him down the rankings, but he’s still in the RB2 mix.

Denver’s addition of Theo Riddick puts Booker’s roster spot in jeopardy. Of course, he was barely on the fantasy radar even before Riddick arrived.

He was placed on reserve PUP and will miss the entire season with an undisclosed injury, according to NFL Network’s Ian Rapoport. That leaves Jordan Wilkins as the Colts’ #3 RB behind Marlon Mack and Nyheim Hines.

He underwent surgery on his injured ankle on Tuesday and is now expected to miss “a few games,” according to NFL Network’s Ian Rapoport. We now have Green projected to play 13 games and will continue to monitor his rehab.

He was slapped with a 4-game suspension for violating the league’s policy on performance enhancing substances. Tate has reportedly had a strong start to camp and will return to a big role in the passing game. But he’s now just a late-rounder in fantasy drafts.

He’s been running mostly with the backups in camp so far. According to Sirius’ Adam Caplan, the Bills are “pretty much” set with John Brown, Zay Jones and Cole Beasley as their top 3 WRs with Foster as a “rotational deep threat.” If that sticks, Foster won’t be a reliable fantasy option.

Callaway reportedly showed up to camp out of shape and has fallen behind Rashad Higgins in the race for the #3 WR job. There’s still time for Callaway to bounce back, but he’s not draftable right now.

He was listed behind both Charles Clay (who’s still on the PUP list) and Maxx Williams on Arizona’s initial depth chart. These early-August depth charts don’t mean much — but we found this significant considering Clay and Williams weren’t even on the team last year. Seals-Jones isn’t a draft option right now.

He’s in a battle for the starting job with Sam Ficken. Consider Crosby the favorite — but look for safer K options if you’re drafting now.

Mike Tagliere of Fantasy Pros joins Jared and Matt to talk about WRs who confounded us in 2020 fantasy football rankings.