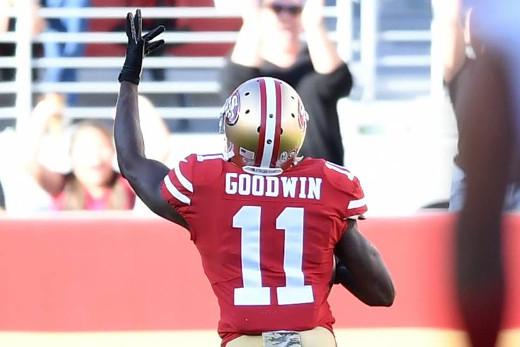 Guice has impressed early in camp, particularly in the passing game. RB Chris Thompson, meanwhile, admitted that he doesn’t expect to be 100% recovered from last year’s broken leg until November. Guice might play a bigger pass-catching role than we originally expected.

Carson has soaked up 1st-team reps in camp so far and been hyped up by Seattle coaches and media. We still expect rookie Rashaad Penny to emerge as the Seahawks’ lead back, but Carson could at least play a significant early-season role.

Elijah McGuire’s broken foot should lock in Powell as the Jets’ primary pass-catching back to open the season. He’s worth a look late in PPR drafts.

NJ Advance Media's Eliot Shorr-Parks wrote this week that Agholor "should be the Eagles' top targeted receiver” this season. He’s impressed early in camp and could benefit from WR Alshon Jeffery missing time as he continues to recover from shoulder surgery. Agholor is a fine value at his WR42 ADP.

Multiple 49ers beat writers have noted that Goodwin has looked like the team’s #1 WR in training camp so far. He’s been consistently making big plays, while Pierre Garcon has gotten off to a slow start. Note that Goodwin averaged 5.8 catches and 76.8 yards per game in QB Jimmy Garoppolo’s 5 starts last season.

Brown has been the talk of Ravens camp so far, making countless big plays downfield and showing good rapport with QB Joe Flacco. A healthy Brown should finish 2nd on the Ravens in targets and could return WR3 value for fantasy squads.

Cincinnati’s release of WR Brandon LaFell this week is another sign that Ross is ready for a significant role this season. Last year’s 9th overall pick is worth highlighting as a late-round sleeper.

What we thought was a competition between Amendola and Albert Wilson might not be a competition at all. HC Adam Gase called Wilson an “outside guy” this week, which would put him in competition with DeVante Parker and Kenny Stills. If Amendola is locked in as Miami’s slot receiver, he’ll carry some PPR value.

Smith has been a standout early in training camp and is already getting 1st-team reps. With only Cameron Meredith and Ted Ginn in his way, the rookie is capable of earning a significant role behind Michael Thomas. Smith is an intriguing late-round flier.

The Pats signed Decker on Thursday, a day after sticking Jordan Matthews on IR. Decker is 31 now and averaged just 10.4 yards per catch in Tennessee last year. But he hauled in 65.1% of his targets and still brings value as a possession receiver. He’ll compete with Kenny Britt, Phillip Dorsett and Cordarrelle Patterson for snaps behind Chris Hogan while Julian Edelman serves his 4-game suspension.

The rookie is still running behind Chris Carson as Seattle’s early-down back, while C.J. Prosise has been handling most of the 3rd-down work. There’s still plenty of time for Penny to make a move, but he might not open the season with as big a role as we originally expected.

He’s expected to miss 3-6 weeks with his broken foot, putting his Week 1 availability in question. Regardless, McGuire won’t be an early-season fantasy asset.

Baldwin got a slight bump down the rankings with news of his knee injury. He’s expected to be back well ahead of Week 1, but the issue adds some risk to his fantasy outlook.

Jeffery is not expected to participate in camp or the preseason as he continues to recover from shoulder surgery, insider Adam Caplan reported this week. Jeffery is still reportedly on track for Week 1, but we’re not considering that a lock. He’s become a risky pick at his early-5th-round ADP.

Garcon has struggled getting on the same page as QB Jimmy Garoppolo early in camp. Remember that Garcon was already on IR with his neck injury when Garoppolo arrived last year. We’ll see if the pair can get rolling, but Garcon is a risky WR3 right now.

We learned this week that Matthews was placed on the PUP list to open camp with his undisclosed injury. He was spotted running some routes before practice on Thursday, so it sounds like he’s making progress. But Matthews carries some risk until he’s removed from that PUP list.

Wilson is a man without a home right now. Viewed as an outside WR by Miami’s coaching staff, he’ll need to beat out DeVante Parker or Kenny Stills in order to be a fantasy factor.

The rookie is expected to miss “a few weeks” with a hamstring injury. That just about kills any chance he had to make a fantasy impact. Coutee isn’t worth a roster spot in redraft leagues.

Matthews was placed on IR after suffering a significant hamstring injury on Sunday. He'll likely end up being released with an injury settlement, but Matthews is off the redraft radar for now.

Tumbling down the depth chart, LaFell asked for his release from the Bengals and got his wish. We’ll see where he lands, but the 31-year-old is unlikely to be a 2018 fantasy factor.

He was cut by the Raiders, who are down to rookie Eddy Pineiro and Mike Nugent at K. It’s a situation to avoid in fantasy drafts until a winner emerges.