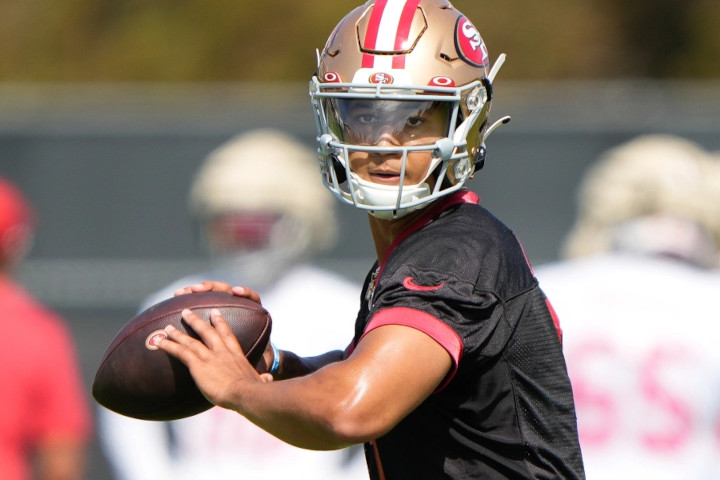 Lance is ripping up training camp, by all accounts, while QB Jimmy Garoppolo has struggled. It feels like the rookie will be under center for San Francisco soon -- if not by Week 1. Lance’s rushing ability in HC Kyle Shanahan’s scheme will give him immediate top-10 upside.

RB Tarik Cohen is still potentially “weeks away” from a return, putting his early-season status in question. If Cohen is out or even limited, that’d likely mean an increased pass-catching role for Montgomery.

Moore has picked up right where he left off in the spring, dominating the early days of training camp. At this point, the rookie feels like a lock for a Week 1 starting job. And he has a chance to lead the Jets in targets this season.

Hardman has drawn praise from multiple Chiefs reporters, notably impressing with his route running in the short and intermediate games. It sounds like he’s developing into a more complete receiver and is the favorite for Kansas City’s #2 WR job.

HC Jon Gruden gushed about Edwards this week, and observers have called the 2nd-year wideout 1 of the most impressive players at Raiders camp. Edwards is in line to open the season as 1 of Vegas’ starting outside WRs.

With Michael Thomas (ankle) and Tre'Quan Smith (leg) sidelined, Callaway has stepped up as the Saints' #1 WR in camp recently. He has a chance to open the season in a big role, with Thomas expected to miss the first handful of games.

This rookie has been a training-camp standout and has a good shot to win a Week 1 starting job. There are plenty of targets up for grabs on a Texans team with very little behind WR Brandin Cooks.

Peoples-Jones is "absolutely lighting up training camp,” The Athletic’s Zac Jackson wrote this week. It sounds like the 2nd-year wideout is pushing Rashard Higgins for the #3 job. That’s still not a great spot for fantasy production, though, in a run-leaning Browns offense that uses 3-WR sets at 1 of the league’s lowest rates. Peoples-Jones is only worth a look in deep best-ball drafts.

Schultz has had a nice start to training camp while the Cowboys ease Blake Jarwin in coming off last year’s torn ACL. We’re still expecting Jarwin to re-emerge as Dallas’ lead TE, but it’s become a situation to monitor over the next month.

Parham has received significant playing time with the 1st-team offense and has “kept pace with [TE Jared] Cook as one of [QB Justin] Herbert’s favorite targets in practice," according to insider Gilbert Manzano. It sounds like targets are up for grabs in the Chargers’ TE room, making the 6’8 Parham an intriguing deep sleeper.

Prescott’s rehab timeline changed this week as the Cowboys learned more about his injury, which Fox Sports’ Jay Glazer reported is “more of a baseball injury” that’s “kinda under the armpit.” It’s unclear when Prescott will resume throwing, but Glazer hears that the Cowboys “fully expect” him to be ready come Week 1. We nudged Dak to the bottom of the top tier of QBs to account for the added risk.

Wentz had foot surgery this week and was slapped with a 5-12 week timetable for return. Fox Sports' Jay Glazer hears that the Colts are tentatively expecting Wentz to be back on the shorter end of that timeline. And ESPN’s Chris Mortensen reports that Wentz hasn’t been ruled out for Week 1. But there’s still a chance that he misses multiple games. And the foot issue might impact the mobility that’s so important to his game.

Garoppolo is being outplayed by rookie QB Trey Lance in camp by almost all accounts. Even if he opens the season as San Francisco’s starter, we’re not expecting him to stay there long. Garoppolo isn’t worth drafting.

NFL Network's Ian Rapoport said Friday that Barkley is expected to debut "by Week 3" -- although Week 1 hasn't been "completely ruled out." It's the clearest indication yet that Barkley is in danger of missing the start of the season. He's a high-risk pick in Round 1 of fantasy drafts.

We knocked all these guys down the rankings with this week’s foot surgeries for QB Carson Wentz and G Quenton Nelson, who are both expected to be sidelined anywhere from 5-12 weeks. The Colts’ offense will undoubtedly suffer if those guys aren’t ready for the start of the season.

HC Matt Nagy admitted this week that Cohen is more "weeks away" than "days away" from returning from last September's torn ACL. It sounds like he’s in danger of missing the start of the season -- and probably won’t be a guy we can trust in fantasy lineups early on.

Golladay went down with a hamstring injury on Tuesday and is expected to be sidelined 2-3 weeks. That’d put him back in plenty of time for Week 1. But hamstrings can be tricky. And, at minimum, Golladay will miss valuable reps with his new team.

Smith is expected to miss 2-3 weeks with a sprained MCL suffered on Sunday. The rookie should be ready for Week 1 but will miss time to get comfy in the offense and gel with QB Jalen Hurts. It might lead to a slow-ish start.

Jarwin has reportedly been limited early in camp as he works his way back from last September’s torn ACL. TE Dalton Schultz, meanwhile, is off to a good start and has this depth chart looking murkier than we thought it would.