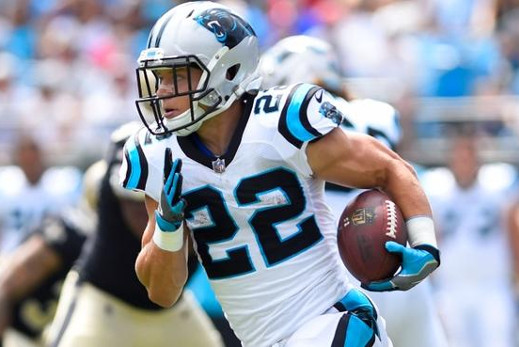 Darnold has fared well through 2 preseason outings, completing 72.4% of his passes with 1 TD and 1 INT. The New York Daily News' Manish Mehta wrote this week that it'd be an "upset" if Darnold isn't the Jets' Week 1 starter. He’s climbed the rankings but is still only an option in 2-QB leagues.

He was the 2nd QB into Friday night’s preseason game in Cleveland — behind A.J. McCarron, who broke his collarbone. Allen played well, completing 9 of 13 passes for 60 yards and a score. He has a good chance to be Buffalo’s Week 1 starter.

McCaffrey has seen feature-back usage through 2 preseason games, playing 28 of 35 snaps (80%) with the 1st-team offense. He busted off a 71-yard TD and caught 4 balls in Friday night’s exhibition vs. Miami. It looks like McCaffrey is in for a big spike in rushing volume this season.

For the 2nd straight preseason game, Hyde operated as Cleveland’s clear lead back. He was on the field for 17 of QB Tyrod Taylor's 25 snaps, carrying 9 times for 64 yards and a score. RB Nick Chubb didn’t play a single snap with Taylor and the starters. The rookie is still capable of pushing for a bigger role throughout the year, but Hyde will open the season as a viable fantasy starter.

All that talk about the battle between Carson and Rashaad Penny for the Week 1 starting job was for naught. Penny had surgery on Wednesday to repair a broken finger that will sideline him 3-4 weeks. That locks in Carson as Seattle’s lead back —and at least a low-end fantasy starter — early this season.

Barber ran as Tampa’s clear top back in the preseason opener — and then HC Dirk Koetter reiterated that Barber is the starter. We’re still expecting Ronald Jones to lead the backfield in touches by season’s end, but this sure looks like a committee backfield. Barber at his 12th-round ADP looks like a fine value.

Kelley dominated 1st-team snaps in Washington’s 2nd preseason game, carrying 4 times and catching his lone target in 1 series with QB Alex Smith. Samaje Perine, meanwhile, sprained his ankle and is expected to miss “at least” a week. Kelley is looking like the heavy favorite to open the season as Washington’s lead ball-carrier.

Hill has looked good through 2 preseason games, averaging 4.8 yards on 17 carries. He appears to be ahead of Mike Gillislee on the depth chart. And that battle has gotten a lot more interesting with the knee injuries to Sony Michel and Rex Burkhead.

The ‘Niners signed Morris this week after losing both Jerick McKinnon (calf) and Matt Breida (shoulder) to injuries. Both guys are expected to be ready for Week 1, but Morris is a nice insurance policy. He has experience in HC Kyle Shanahan’s offense and averaged 4.8 yards per carry last year. Put him on your “watch list.”

Brown continues to buzz hard. HC John Harbaugh said this week that he’s “been better than we expected” and called him a “complete receiver.” Brown is capable — and maybe even likely — to return a huge profit at his WR72 ADP.

Taylor continues to climb the rankings as Rishard Matthews remains sidelined with his still-undisclosed injury. Taylor has been drawing rave reviews in training camp and ran with QB Marcus Mariota and the starters in the preseason opener.

Amendola played 9 of 11 snaps with QB Ryan Tannehill in Miami’s preseason opener. Albert Wilson played 0. It’s clear at this point that Amendola is the heavy favorite to open the year as the Dolphins’ slot receiver.

Wallace got a slight bump up the rankings with Alshon Jeffery (shoulder) iffy for Week 1 and Nelson Agholor (lower body) currently sidelined. Wallace could open the season with a bigger role than initially expected.

Dorsett was on the field for 27 of QB Tom Brady’s 35 snaps in New England’s 2nd preseason game. That was tied with Julian Edelman for 2nd most among WRs, behind only Chris Hogan’s 29. Dorsett looks like the Patriots WR to take a shot on late in drafts.

John Oehser of the Jags’ official website wrote this week that Westbrook "may be playing his way into a spot among the top three receivers." He ran with the starters in the preseason opener, hauling in 3 balls for 32 yards. We’re still not sure what to make of Jacksonville's WR corps, but Westbrook is a fine late-round flier.

Wentz admitted this week that "it's going to be close" for him to be ready for the season opener. We’ve heard similar reports throughout the offseason, but this was the 1st time we heard it from Wentz himself. Even if he’s able to get on the field for Week 1, his mobility and rushing upside figures to be limited. He’s overvalued at his QB6 ADP.

It looks like McCown will be holding the clipboard for rookie Sam Darnold this year.

He suffered a hairline fracture to his collarbone in Friday night’s preseason game in Cleveland. That knocks McCarron out of Buffalo’s QB competition.

McKinnon will be sidelined until Week 1 with his strained calf and saw the ‘Niners add RB Alfred Morris on Monday. Morris has 2 years of experience in HC Kyle Shanahan’s offense and averaged 4.8 yards per carry with the Cowboys last season. McKinnon has become a risky pick before the middle of Round 3.

Burkhead has a “slight tear” in his knee, according to The Athletic’s Jeff Howe. He’s expected to play through the injury, but it’s entirely unclear how effective he’ll be and how long he’ll hold up. It adds lots of risk to Burkhead’s fantasy profile.

He had surgery on Wednesday to repair a broken finger and is expected to be sidelined 3-4 weeks. That kills the rookie’s chance of winning the Week 1 starting job. Penny is plenty capable of emerging as Seattle’s lead back by October, but he probably won’t be much help to fantasy squads for the first few weeks of the season.

He didn’t play a single snap with QB Tyrod Taylor and the starters in Friday’s preseason game. Chubb could earn a role throughout the year, but he won’t be an early-season fantasy option.

The good news: Anderson saw some action with the 1st-team offense in Carolina’s 2nd preseason game. The bad news: He carried just 3 times with the starters vs. 5 carries and 4 catches for Christian McCaffrey. It looks like McCaffrey’s rushing role is set to expand — at the expense of Anderson.

Here we go again. Prosise missed Seattle’s preseason opener with a hip flexor injury. There’s opportunity for him to serve as the primary pass-catching back this year, but Prosise has so far proven incapable of staying healthy.

Perine again ran behind Rob Kelley in Washington’s 2nd preseason game, receiving 0 snaps with the 1st-team offense. And then he hurt his ankle on his 1st carry. Perine is hardly draftable right now.

Jeffery isn’t a lock to be ready for Week 1 as he continues rehabbing from shoulder surgery, according to NFL Network’s Ian Rapoport. Throw in the concerns with his QB, and Jeffery will be tough to trust in early-season fantasy lineups.

Parker is sidelined with a broken right middle finger. Miami tentatively expects him back for Week 1, but the missed time is bad news for a guy who disappointed in his first 3 NFL seasons and early in this year’s training camp.

Matthews remains sidelined with his undisclosed injury with no timetable for return. With Taywan Taylor seemingly pushing for the #2 WR job in Tennessee, Matthews is just a late-round flier right now.