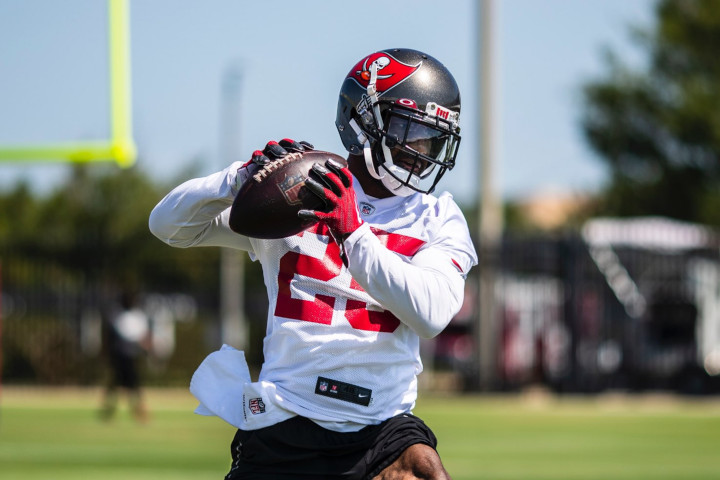 Brown operated as Miami’s clear lead back in the preseason opener, out-snapping RB Myles Gaskin 16 to 7 with the 1st-team offense. HC Brian Flores suggested afterwards that this will be a committee backfield, potentially including RB Salvon Ahmed too. So Brown isn’t a high-upside fantasy option. But he’s at least worth considering late in drafts.

Lindsay out-snapped RB David Johnson 8 to 2 with the starters in Week 1 of the preseason. Lindsay played all the early downs, while Johnson entered on 3rd downs. An early-down role on what figures to be a bad Texans offense isn’t a great fantasy role. But Lindsay is at least worth a look late in your fantasy draft.

Bernard played both 3rd-down snaps with QB Tom Brady and the 1st-team offense in the preseason opener -- an indication that he’ll be Tampa’s passing-down back this year. Then HC Bruce Arians said Thursday that Bernard will be a “major part of the offense.” At minimum, he’s looking like a nice bench stash in PPR leagues.

Smith returned to practice on Monday -- 2 weeks after spraining his MCL. And he played 26 snaps in Thursday night's preseason game. Barring a setback, the rookie is still a good bet to open the season as Philly’s #1 WR.

Meyers sure looks like New England’s #1 WR. He’s played 27 of 29 snaps (93%) with QB Cam Newton and the 1st-team offense through 2 preseason games and compiled 4 catches for 67 yards and a score. Meyers is an excellent late-round target — especially in PPR drafts.

Callaway followed up a buzzy training camp with a strong showing in the preseason opener. He played every snap with the 1st-team offense and caught 3 of 4 targets for 61 yards. There’s a chance he opens the season as New Orleans’ #1 WR.

Marshall jumped off the tape in the preseason opener, finishing with 3 catches for 88 yards -- highlighted by this 60-yard catch and run. The rookie appears to have locked up the #3 WR job in Carolina and is a nice late-round flier in fantasy drafts.

The Athletic's Daniel Popper believes Palmer has a "stranglehold" on the Chargers' #3 WR job. The rookie had a nice preseason debut, catching 6 balls for 36 yards on just 17 snaps. He’s worth a look at the end of fantasy drafts.

Although he’s still behind TE Jared Cook on the depth chart, Parham has had a strong training camp and is “going to have a big and influential role” in the offense, according to The Athletic’s Daniel Popper. Parham will probably need to move past Cook to be a reliable fantasy play this year. But that's certainly within the realm of possibility.

The Athletic’s Katherine Terrell believes Johnson, a former WR, "seems headed for a Jared Cook-type of role" this season. Johnson played just 4 of 20 snaps with the 1st-team offense in the preseason opener, so we’re not ready to consider him a fantasy option yet. But he’s a name to monitor.

He’s reportedly leading Michael Badgley in the Chargers’ kicker competition. Avoid the situation in fantasy drafts until we get a winner.

Gaskin played clear behind RB Malcolm Brown in the preseason opener, getting out-snapped 16 to 7. HC Brian Flores suggested afterward that this will be a committee backfield -- potentially including Salvon Ahmed too. At this point, we can’t consider Gaskin more than a RB3.

We’ve heard whispers that Murray could be a cut candidate. The Athletic’s Katherine Terrell wrote this week that it “feels like” Murray will make the team -- but we’ve nudged him down the rankings a bit just to account for the risk that he does get released.

Johnson operated as a strictly a 3rd-down back in the preseason opener, with RB Phillip Lindsay playing on early downs. That setup could still feed Johnson a good number of targets -- but he’d certainly fall short of reliable weekly fantasy value.

Evans hurt his knee in the preseason opener and has been sidelined since. Avoid him in fantasy drafts at least until we get a timetable for his return.

He was cut by the Eagles after hurting his knee this week. Johnson is well off the fantasy radar.

Miller suffered a "slight" dislocation of his right shoulder in the preseason opener and "could" be back for Week 1 or 2, insider Aaron Wilson reported this week. That pretty much knocks Miller out of draft consideration.

Trautman’s usage in the 1st preseason game was worrisome. And now there’s talk that converted-WR Juwan Johnson could have a role as a pass-catching TE this season. It has Trautman down in low-end TE2 territory in the rankings.

Rookie Josh Palmer is reportedly the favorite for #3 WR duties, pushing Johnson and Guyton off the fantasy radar.

He remains on the PUP list after offseason back surgery. The Cowboys signed K Lirim Hajrullahu this week, suggesting at least some level of concern for Zuerlein’s status. We’d avoid him in fantasy drafts until we know he’s healthy.

He’s reportedly trailing Tristan Vizcaino in the Chargers’ kicker competition. Avoid the situation in fantasy drafts until we get a winner.