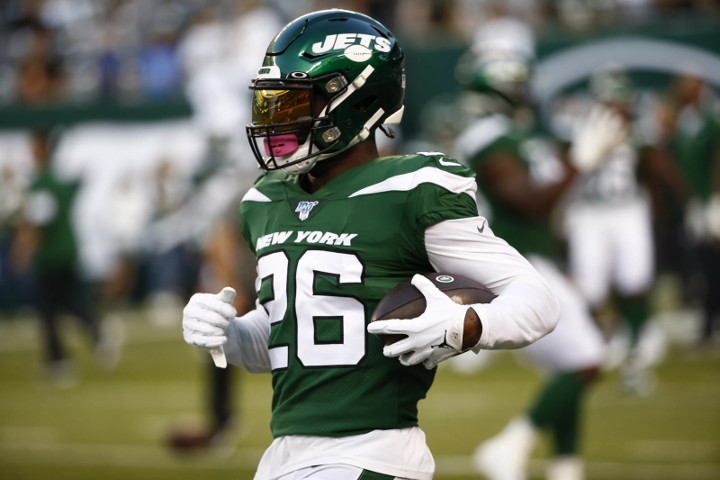 RB Darrell Henderson suffered a hamstring injury last weekend. HC Sean McVay expects him to be ready for Week 1 — but the missed practice time just makes Akers a better bet to open the season as the Rams’ lead back. We don’t expect the rookie to relinquish that job.

He made another move up our rankings with another strong week at camp. RB Sony Michel returned to practice on Wednesday after May foot surgery — but Harris continued getting the majority of the 1st-team reps. He remains the favorite to open the season as New England’s lead back.

He’s had a busy and productive camp, according to The Athletic’s Zak Keefer. "It’s probably not a stretch to say the third-year running back has caught more passes from [QB Philip] Rivers than anyone else,” Keefer wrote this week. Hines doesn’t have much rushing upside but could catch enough balls to be a nice PPR asset.

The Athletic’s Daniel Popper wrote this week that Kelley "might be having the best training camp of any player on the roster.” That same article noted that the rookie is still behind Austin Ekeler and Justin Jackson on the depth chart. But it sounds like Kelley is at least pushing Jackson for snaps behind Ekeler.

He’s had a nice camp and will enter the season as Pittsburgh’s #2 RB. Snell is the handcuff to James Conner.

Williams looks set to enter the season as Kansas City’s #2 RB behind Clyde Edwards-Helaire, according to The Athletic’s Nate Taylor. We’d still expect a committee backfield with Williams, DeAndre Washington and potentially Darwin Thompson if Edwards-Helaire misses time. So we're not going out of our way to draft any of these Chiefs backups outside of super deep fantasy leagues. But Williams might be the pickup if CEH goes down.

We were admittedly late to bump Reagor up the WR rankings. He’s been impressing throughout camp — and the buzz continued this week, with The Athletic’s Zach Berman writing that the rookie will be a "major part of the offense" this season. Reagor is a nice target at his 10th-round ADP.

Burton has been buzzing throughout camp and looks set to play a sizable role in a Colts offense that makes heavy use of its TEs. Remember that Burton flashed in Philadelphia, playing under then-Eagles-OC, now-Colts-HC Frank Reich. He’s probably still not worth a pick in standard-sized fantasy leagues, but put Burton on your waiver-wire watch list.

He’s "emerging as Washington's top TE,” according to The Washington Post's Nicki Jhabvala. Thomas is a former college QB with just 35 NFL catches. But he’s 6'6, 248 pounds with 4.6 speed. We’ll be keeping an eye on how big a role he’s playing early this season. He might emerge as a spot-start option.

The rookie beat out Stephen Hauschka for Buffalo’s starting job. We’d look elsewhere in drafts — but Bass might become a spot-start option this season.

The Athletic’s Connor Hughes suggested this week that Bell has been out-played by Frank Gore in camp. "Bell is a better player than Gore. But Gore looks like a better player for the Jets right now,” Hughes wrote. Bell remains a virtual lock to out-touch and out-score Gore -- but it's looking more and more like Gore will steal an annoying amount of touches this season.

He suffered what appeared to be a significant groin injury in Wednesday’s practice. NFL Network’s Ian Rapoport hears that Montgomery is expected to miss 2-4 weeks. That gives him a chance to be ready for the opener — but it’s more likely that he misses a game or 2. That knocked Montgomery down into low-end RB3 territory in the rankings.

The rookie went down in last weekend’s scrimmage with a hamstring injury. HC Sean McVay expects to have him back by Week 1. But the missed practice time hurts his chances of having a significant role out of the gate. Henderson is just a bench stash in fantasy.

Williams is expected to miss 2-4 weeks with his sprained shoulder, according to NFL Network’s Tom Pelissero. HC Anthony Lynn admitted that Williams is iffy for the start of the season. So don’t draft him as a Week 1 starter — although we still like Williams as a bench stash.

He suffered a hamstring injury in Sunday’s practice that has him considered “week to week.” Aiyuk was in line to play a big role out of the gate — and might still do so if he’s healthy by Week 1. We nudged him down the rankings but still like Aiyuk as a later-round flier.

He has a torn labrum in his shoulder. Williams is attempting to rehab and play through it, which obviously adds a tons of risk to his fantasy outlook. He’s now undraftable outside of deep fantasy leagues.

He was released by the Bills on Thursday after losing the competition against rookie Tyler Bass.