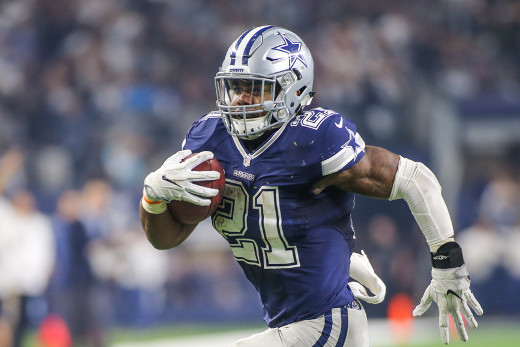 Kizer was named Cleveland’s starter last weekend. He wrapped up the preseason with a 51% completion rate — but a decent 7.2 yards per attempt, plus 47 yards and a score on the ground. The rookie figures to be a volatile fantasy option this year.

He’ll start for what could be 1 of the worst offenses we’ve ever seen. McCown isn’t worth rostering outside of best-ball leagues.

It’s looking more and more likely that Elliott will be on the field for the opener against the Giants. And it’s even possible that he’s eligible for the entire season. Check Shark Bites for the latest on Zeke’s situation.

Spencer Ware is out for the season with a torn PCL and LCL. That leaves Hunt as the lead back in an offense that’s regularly produced top 16 PPR RBs. He’s worth considering as early as the tail end of the 3rd round.

He ripped off 57 yards and a score in the 3rd preseason game, distancing himself from rookie Samaje Perine. Kelley isn’t an exciting pick but should produce as at least a low-end RB2 early this season.

He looked good in his preseason debut last weekend, carrying 4 times for 27 yards and catching 2 balls for 15 more. Charles figures to open the season as Denver’s #2 RB and could push for C.J. Anderson’s starting job.

Arizona released Chris Johnson on Friday, leaving Williams as the #2 RB — and the handcuff to David Johnson.

This undrafted rookie appears to have won the #2 RB job in San Francisco. He’s not worth rostering outside of best-ball leagues but could become a factor with a Carlos Hyde injury.

Coleman posted a 4-66 line in the 3rd exhibition, including a couple of diving grabs. More importantly, he saw a team-high 7 targets from QB DeShone Kizer. That duo seems to have a nice rapport already, giving Coleman breakout potential.

He’s the #1 WR in Chicago followed Cameron Meredith’s season-ending knee injury. It’s a huge opportunity for the former 1st-rounder. White is well worth a look at his 12th-round ADP.

It looks like Thielen will open the season as Minnesota’s primary slot receiver. He ran 20 routes from the inside in the 3rd preseason game. The new role figures to boost Thielen’s volume and catch rate.

Richardson has followed a hot finish to 2016 with a strong August. He’ll open the season as the #2 WR in an efficient passing game. Highlight him as a sleeper in your rankings.

He’s reminded us of his big-play ability this preseason with 74- and 45-yard TDs. Benjamin is part of a deep group of Chargers pass-catchers and will be tough to bank on in lineup-setting leagues. But he’s a nice late-round best-ball pick.

Westbrook dominated this preseason, racking up 288 yards and 2 TDs on 13 catches — a massive 22.2 yards per catch. There’s still only an outside chance he emerges as a 2017 fantasy option, but this rookie needs to be rostered in all dynasty leagues.

Engram led Giants TE with 23 snaps in the 1st half of last weekend’s preseason game -- the majority of those coming with QB Eli Manning. He’s on track to play a significant role right out of the gate and is worth rostering as a TE2.

McDonald got a huge upgrade in supporting cast with his trade from San Francisco to Pittsburgh. He’ll compete with Jesse James for targets but is certainly capable of winning that battle once he settles into the offense. McDonald probably isn’t worth drafting but could emerge as a spot-start option this season.

The McDonald trade opens up the lead pass-catching role for this rookie. Kittle has impressed all offseason, starting with a Combine performance that earned him a 97th percentile SPARQ score. Like McDonald, Kittle could become a streaming option at some point this year.

He beat out Zack Hocker for the starting job. Folk is a fine fantasy option in what should be a strong Bucs offense.

He’ll miss the entire season after tearing his PCL and LCL in the 3rd preseason game. He’s facing a lengthy rehab process and isn’t a lock to be ready for the start of the 2018 campaign.

He’ll find running room tough to come by early on this season with both QB Andrew Luck and C Ryan Kelly out. Kelly is expected to miss the 1st half of the season.

McFadden’s handcuff appeal has taken a hit with Ezekiel Elliott looking more likely to be eligible for Week 1 — and potentially the entire season.

The rookie had a disappointing August, never seriously challenging Rob Kelley for the starting job. Perine could still make a move during the season, but he isn’t worth rostering in standard-sized fantasy leagues right now.

It looks like he’ll make the team — but the fact that it’s even a question is disappointing considering the buzz on Williams early this offseason. He’s a fine dynasty stash but shouldn’t be on redraft rosters.

He was dumped by the ‘Niners on Friday, beaten out for the backup job by rookie Matt Breida.

He was cut by the Cardinals after an ugly preseason (3.2 yards per carry, 2 fumbles). Johnson’s NFL career is just about over.

It looks like he’ll play more outside the numbers this year than he did last. That should boost Diggs’ yards per catch but figures to ding his catch rate, and possibly his target volume.

He’ll miss the entire 2017 after suffering a torn ACL and a "minor tear" of his MCL in the 3rd exhibition. Meredith should be ready for 2018 training camp.

We heard whispers this week that Hurns is on the trade block. (Of course, moving out of Jacksonville would probably help his fantasy stock!). If he sticks, though, don’t be surprised if he’s pushed for snaps by impressive rookie Dede Westbrook. Hurns isn’t worth drafting.

He’s expected to miss a “couple of weeks” with a knee injury suffered in the preseason finale, according to Bengals.com’s Geoff Hobson. Ross also missed all of spring workouts and the 1st half of August recovering from shoulder surgery. He’s way behind and won’t be an early-season factor.

He failed to crack a weak Bears WR corps, getting cut on Friday. Turning 31 in November and with a plethora of leg injuries behind him, Cruz has very little left in the tank.

James has competition on his hands after Pittsburgh’s trade for Vance McDonald. James has the edge in familiarity in the system, but McDonald is the better athlete. Neither guy is worth drafting outside of best-ball leagues.

He landed on IR with a wrist injury. Marcedes Lewis and Ben Koyack will handle TE duties in Jacksonville.