The Seahawks named Smith their Week 1 starter. He looked better than expected in preseason action but is still only a QB3 option in Superflex drafts.

Houston cut RB Marlon Mack – then re-signed him to the practice squad. Regardless, it’s clear that Pierce will open the season as the Texans’ lead runner. We’ll see how much action he garners in the passing game.

RB Brian Robinson’s status has Gibson atop the depth chart to open the season. It sounds like Robinson has a chance to be back Week 5, but Gibson now has an opportunity to lay claim to the lead job. The schedule will work in his favor: vs. Jacksonville, at Detroit, vs. Philadelphia, at Dallas.

RB Ty Montgomery’s ankle injury leaves Stevenson as the favorite for pass-catching duties in the Pats backfield early this season. And NESN's Zack Cox said this week that he wouldn’t be surprised if Stevenson overtook Damien Harris as the lead runner by the end of the year.

He sat out the preseason finale, while RB Kenneth Gainwell played. That might suggest that Scott is #2 on Philly’s depth chart. That’s noteworthy with RB Miles Sanders working his way back from a hamstring injury.

Miami cut RB Sony Michel, leaving Mostert as the clear #2 behind Chase Edmonds. This will be a committee backfield, so Mostert could have RB3 or flex value – especially in non-PPR – as long as he’s healthy.

A week after getting released by the Raiders, Drake signed with the Ravens. It’s a win for his fantasy value with Gus Edwards on the PUP list and J.K. Dobbins expected to be limited early on. Drake – along with Mike Davis – could have a significant early-season role.

The Athletic's Matt Barrows believes Wilson will open the season as the 49ers' #2 RB behind Elijah Mitchell. Mitchell, of course, missed over 2 weeks in August with a hamstring injury – after dealing with a bunch of injuries last year.

Now healthy, Williams was held out of the Rams’ preseason finale because he, as HC Sean McVay said, is an “integral part of the plan this season.” We’re still not betting on the rookie being a fantasy factor behind a healthy Cam Akers and Darrell Henderson. But both of those guys have struggled with injuries.

Shenault is a riser only because he had no shot at fantasy value in Jacksonville. The light is at least flickering again in Carolina, where Shenault has a chance to claim the #3 WR job. He’s still not worth a pick in redraft leagues.

It was a rocky preseason. But, with TE Greg Dulcich starting the season on IR, Okwuegbunam has every chance to run with Denver’s starting TE job. Consider him an upside TE2 target.

ESPN's John Keim wrote this week that the "expectation" is that Thomas will return by Week 2 “at the latest.” It’s been a speedy recovery from last December’s torn ACL, MCL and meniscus. Thomas is still more potential in-season pickup than draft target.

TE Zach Ertz has been sidelined nearly a month now with a calf injury, and HC Kliff Kingsbury seemed to suggest this week that Ertz isn’t a lock for Week 1. That could give McBride a chance to carve out a role in a Cardinals offense that’ll also be without WR DeAndre Hopkins for the first 6 weeks.

He was unable to beat out QB Geno Smith for Seattle’s starting job. We’re still expecting Lock to make starts this season, but he has no place on fantasy rosters right now.

Robinson was shot twice in the lower body in an attempted carjacking on Sunday night. He was released from the hospital on Monday and seems to be recovering nicely. Robinson was placed on IR on Thursday, which knocks him out for at least the first 4 games of the season. But NFL Network’s Ian Rapoport said there's a "chance” Robinson suits up for Week 5.

The rookie looks set to open the season as Atlanta’s #3 RB behind Cordarrelle Patterson and Damien Williams. Allgeier is capable of at least climbing past Williams on the depth chart, but he won’t be a Week 1 fantasy option.

He hurt his ankle in the preseason finale. Montgomery hasn’t been placed on IR as of this writing, so the Patriots evidently expect him back before Week 5. Check Shark Bites for updates on Montgomery’s status.

He was released by Houston on Tuesday and re-signed to the team’s practice squad the next day. Mack is an emergency-only option for the Texans and isn’t worth a roster spot in fantasy.

He’s still sidelined with the calf injury he suffered back on August 4. HC Kliff Kingsbury said Wednesday that he's hoping to "get something out" of Ertz early next week. It sounds like his availability for the season opener is in question.

Henry made his preseason debut last weekend and split snaps and pass routes down the middle with TE Jonnu Smith. If that continues in the regular season, Henry won’t be a reliable fantasy play.

Dulcich was placed on IR after missing most of camp with a hamstring injury. That knocks him out for at least the first 4 games of the season. Dulcich isn’t worth stashing outside of the deepest of fantasy leagues – but we’ll keep an eye on his role once he gets healthy.

Gonzalez suffered what HC Matt Rhule called a "significant" groin injury that's likely to keep him out "long term.” He was placed on IR and K Eddy Pineiro signed in a corresponding move. Pass rate over expected for and against data for all 32 teams through Week 11. 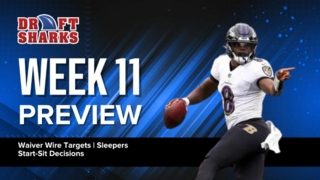