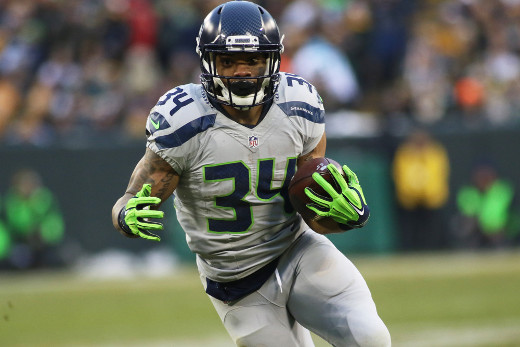 Note: You won’t find Ezekiel Elliott, Darren McFadden or any Rams or Bills in this article. We tackled those situations in separate articles:

He un-retired to sign a 1-year deal in Miami, where he’ll start in place of the injured Ryan Tannehill. Cutler struggled before a season-ending shoulder injury last season, but he completed 64.4% of his attempts with 21 TDs and 11 INTs the year prior. That season came under then-Bears OC and now-Dolphins HC Adam Gase. That familiarity will help. But Cutler will be piloting a run-heavy offense and is no more than a low-end QB2.

He’s off to an early lead in the QB competition — “by default,” according to Yahoo's Charlie Robinson. Siemian has remained steady-if-unspectacular, while Paxton Lynch has failed to take a step forward. It’s too early to call this race, but Siemian is the Broncos QB to target right now late in best-ball or 2-QB drafts.

It continues to look like Rawls is neck-and-neck with Eddie Lacy for the early-down job in Seattle. The duo split 1st-team reps during a mock game this week, according to ESPN's Sheil Kapadia. Rawls is well worth a look at his 13th-round ADP.

These 3 Eagles all moved up the rankings as we redistributed the 100 or so targets the departed Jordan Matthews was projected for. Jeffery now looks like the clear top dog in Philly. Agholor, meanwhile, is locked in as the slot guy after a buzzy spring and start to camp. Ertz should soak up a chunk of the short-range targets Matthews was set to see.

He’s had an “excellent camp,” according to the Charlotte Observer's Jordan Rodrigue. Rookie WR Curtis Samuel, meanwhile, has missed all but 1 practice with an injured hamstring. Funchess seems the heavy favorite to open the season as Carolina’s #2 WR, giving him some breakout potential as a 23-year-old former 2nd-round pick.

Someone has to lead the Jets WRs in targets after Quincy Enunwa’s season-ending neck injury. Anderson is the best bet for now after a promising 42-587-2 rookie line. This Jets offense has a chance to be historically bad, though, so don’t get too excited about him.

The rookie has followed an impressive spring with a strong start to training camp. He’s been especially effective in the red zone, according to insider Kyle Meinke. There’s opportunity there with the departure of Anquan Boldin, who led the team with 22 red-zone targets last year.

Look for him to pick up some of the targets left behind by Quincy Enunwa. Seferian-Jenkins has been a standout in spring practices and training camp, potentially ready to cash in on the upside his combination of size and athleticism has always presented. Note that ASJ is suspended for the first 2 games of the season. But he could emerge as a spot-start option shortly thereafter.

For the 1st time this offseason, the Colts admitted that Luck isn’t a lock to be ready for Week 1. More specifically, GM Chris Ballard said his QB’s Week 1 status is “to be determined.” We bumped Luck behind Russell Wilson in the rankings and wouldn’t take him anywhere near his 5th-round ADP.

He’s been inconsistent in camp so far and has fallen behind Trevor Siemian in the QB battle, according to Yahoo's Charlie Robinson. There’s still time for Lynch to make a move, but he’s not worth drafting at this point.

Perine got off to a rough start in training camp and then fumbled in Washington’s preseason opener. The rookie is looking unlikely to win the Week 1 starting job and can’t be drafted as more than a bench stash right now.

The rookie has failed to stand out early in camp and appears to be 4th on the current depth chart, according to insider Dan Duggan. Gallman isn’t worth a roster spot in redraft leagues at this point.

He was placed on IR with a neck injury, ending his 2017 campaign.

The rookie has missed all but 1 training-camp practice with a hamstring injury. He’s falling behind, especially with WR Devin Funchess impressing. It’s tough to imagine Samuel being a fantasy option early this season.