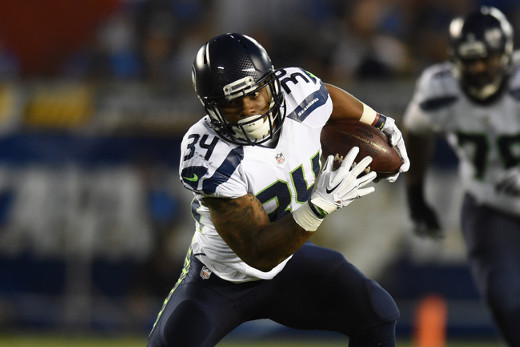 Rawls was activated from the PUP list last Sunday. Seattle will bring him back slowly, but he’s clearly on track for Week 1. Rawls seems locked in as the lead back with rookie RB C.J. Prosise still sidelined with a hamstring injury.

GM Scot McCloughan talked up his rookie this week and called his backfield a “2-headed monster.” McCloughan also deemed RB Matt Jones a “breakout candidate,” though. Marshall lost 1 yard on 5 carries in the preseason opener. He remains just a late-round flier for now.

White is working as New England’s 1st-team passing-down back with RB Dion Lewis still on PUP. White ranked 6th among RBs in PPR points with Lewis out from Week 10 on last year. He ripped off a 56-yard catch-and-run in the preseason opener. White will be a PPR starter if Lewis misses time this year.

The rookie continues to run as a starter. It’s tough to get excited about Sharpe’s upside in what figures to be a run-leaning offense, but he’s at least worth considering near the end of drafts.

Pryor is squarely in the mix for Cleveland’s #2 WR job — at least until Josh Gordon returns. The former QB has reportedly had an impressive camp and certainly has the size and athleticism to make an impact. He hauled in 2 balls for 57 yards in Friday night's preseason opener -- both from starting QB Robert Griffin.

He’s running as a starter, ahead of Laquon Treadwell. Johnson hauled in a 49-yard TD from QB Teddy Bridgewater in Friday night's preseason game. We're still betting on Treadwell passing Johnson at some point during the year, so he’s only worth a roster spot in deep fantasy leagues.

Graham was activated from the PUP list on Wednesday, presumably putting him on track for Week 1. We’re still not interested in drafting him at his TE14 price. The history of guys returning from patellar injuries is brutal.

Bennett was busy in the preseason opener, hauling in 3 balls for 33 yards in 1 quarter of action. It’s becoming more and more apparent that he’ll play a significant role in this offense — especially with the injury issues at WR.

We got the 1st whiff of a committee backfield in Washington this week — and it came from GM Scot McCloughan. Jones also got some love from his GM, though, and got starter treatment in the preseason opener. We nudged him down the rankings a tad, but he’s still a fine target at his 6th-round ADP.

Mason was taken to a Florida hospital for mental evaluation last weekend. He hasn’t reported to training camp and reportedly hasn’t even been in contact with the Rams. We removed the former 3rd-rounder from the rankings.

The rookie still hasn’t cracked the starting lineup and isn’t a lock to do so before Week 1. He should only be drafted as a fantasy reserve.

Wright is expected to be out another couple of weeks with a hamstring injury. He was a low-upside bench stash to begin with and might not be worth drafting at all now.

Mitchell dislocated his elbow in Thursday night’s preseason opener and is expected to miss at least 4 weeks. That kills the rookie’s chances of making an early-season impact. Don’t draft him, but keep him on your watch list. Mitchell had been building momentum in camp recently and caught 4 balls in the exhibition.

Johnson will miss the entire season after undergoing surgery to repair a torn meniscus.

We learned this week that Green remains sidelined with recurring headaches, rather than his surgically repaired ankle. There’s reportedly a possibility that Green is cut or retires. We can’t draft him as more than a bench guy right now.

What looked like a potentially season-ending injury last Saturday turned out to be just a “pretty decent [right] ankle sprain.” Ebron reportedly has a shot to be ready for Week 1. He lost a bit of value but can still be drafted as part of a TE-by-committee. 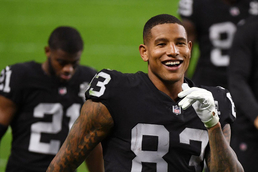 Picking 11th, I took my shot at the $500K Main Event top prize. Is this team a contender?