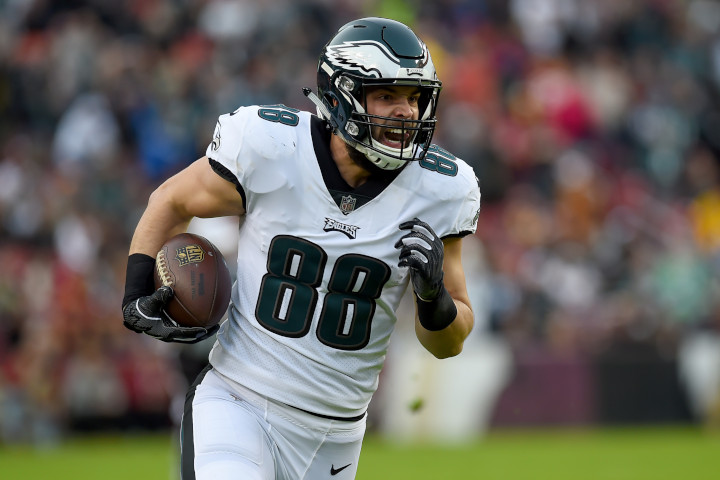 The positive news on Wentz’s recovery from foot surgery continued this week, with ESPN’s Chris Mortensen reporting that Wentz is "trending" toward being ready for the start of the season. He was spotted watching practice this week without a boot on that injured foot. We also nudged WRs Michael Pittman, T.Y. Hilton and Parris Campbell back up the rankings on the Wentz news.

CBS’ Jonathan Jones came away from Chargers camp believing Justin Jackson has a "stranglehold" on the #2 RB job. If that’s the case, he’s worth a look near the end of drafts -- at least as an Austin Ekeler handcuff, and potentially as a standalone fantasy option.

Don’t go writing Michel’s obituary yet. The Athletic’s Jeff Howe wrote this week that Michel is having the best training camp of his career and called him the “1B” to Damien Harris’ “1A.” Michel didn’t see the field with New England’s 1st-team offense in Thursday night’s preseason opener, though. So he’s more of a “watch-list” guy than draft target for now.

Jones seems to be pulling away as the Rams’ #2 RB behind Darrell Henderson. HC Sean McVay said this week that Jones is “going to carve out a role for himself” and is someone the Rams are “expecting to count on throughout the season.” The team could still add a free agent to the mix, but consider Jones the current favorite for that #2 spot.

McFarland has seemingly emerged as Pittsburgh’s #2 RB. He won’t be a fantasy factor as long as rookie RB Najee Harris is healthy. But McFarland would be the waiver-wire add if Harris goes down.

Jones is having a nice camp and could benefit if WR D.J. Chark misses the start of the season or just starts slow after his recent hand surgery.

We learned this week that Mims lost 15+ pounds dealing with food poisoning in June -- which at least partly explains his struggles in minicamp and OTAs. The 2nd-year wideout has reportedly been better in training camp recently and started seeing some 1st-team reps. There’s still sorting out to do in this Jets WR corps, but keep Mims on your radar.

Eagles insider Eliot Shorr-Parks called Watkins the team's best WR since DeVonta Smith went down with his knee injury. That probably says more about Philly’s WR corps than Watkins. But the 2020 6th-rounder is at least worth monitoring over the next few weeks.

Kelley has reportedly fallen behind Justin Jackson for the battle for the #2 RB job in Los Angeles. Kelley isn’t worth drafting unless that changes.

Chark had surgery this week to repair what HC Urban Meyer called a "minor" break in his hand. Meyer expects Chark to be ready for Week 1, but he’s going to miss valuable practice and preseason reps in a new offense and with a new QB.

Samuel came off the COVID list this week but remains stuck on the PUP list after a June groin injury. HC Ron Rivera had no timetable for Samuel’s return when asked on Sunday. He’s at least familiar with this offense after playing for OC Scott Turner in Carolina in 2019. But it’d be nice for Samuel to be able to build some rapport with QB Ryan Fitzpatrick.

Fuller remains sidelined after suffering what’s believed to be a foot injury on July 28. Fuller is suspended for Week 1, so he has a little extra time to get ready for his 2021 debut. But the foot issue is becoming a real concern -- especially considering Fuller’s past durability problems.

Bateman hurt his groin on Tuesday and underwent surgery a few days later. HC John Harbaugh the rookie will be back "sometime in September." So he’s in danger of missing the start of the season and probably won’t be someone we can start to think about using in fantasy until October.

Goedert was out-snapped 7 to 5 by TE Zach Ertz with the 1st-team offense in Thursday’s preseason opener. Both guys ran 5 pass routes. If Ertz sticks in Philadelphia this year, it looks like this will remain an annoying TE committee.

Lutz had core-muscle surgery and could miss 8+ weeks, according to NFL Network's Ian Rapoport. Lutz is not draftable now.