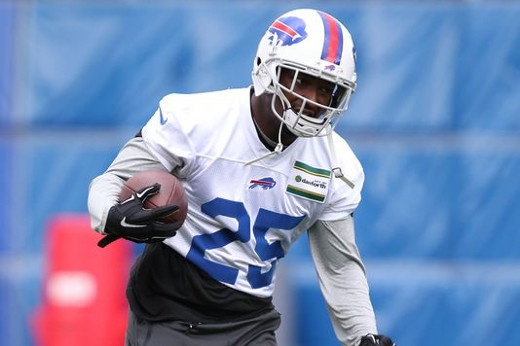 Fitzpatrick will open the season as the Jets’ starter after Geno Smith got his jaw busted by a teammate this week. Knock Fitz as a real-life QB, but he ranked 10th, 16th and 19th, respectively, in fantasy points per game in 3 seasons with OC Chan Gailey in Buffalo. And he has better weapons now in New York. He could make an interesting spot start or DFS play in positive early-season matchups against the Colts (Week 2), Eagles (3) and Redskins (6). HC Todd Bowles also said that Fitzpatrick could keep the starting job all season if he’s playing well.

Taylor was the 2nd QB into the game in Buffalo’s preseason opener on Friday night. He completed 5 of 8 passes for 49 yards and ran 6 times for 47 yards. Taylor will start the Bills’ 2nd exhibition, so he’s clearly in the mix for the starting job. That rushing ability could make Taylor a sneaky fantasy option.

The Bills coaching staff talked up McCoy’s receiving ability this week, with HC Rex Ryan saying he’ll be used in a Marshall Faulk-like role. We’ve also heard that Shady has been impressive as a pass-catcher in camp. It’s an important development because OC Greg Roman didn’t use his backs much in the passing game in San Francisco. That could change in Buffalo, which would raise McCoy’s ceiling and floor.

After buzzing nearly every day in August, Abdullah kept the momentum rolling in his preseason debut. The rookie carried 7 times for 67 yards, including this electric 45-yarder. Abdullah seems primed to make a major impact right away. The question now will be just how high his ADP climbs.

Bolden is the new current favorite for pass-catching duties in New England, according to insider Karen Guregian. (James White and Travis Cadet have also been named the favorite at different points this offseason.) Bolden has spent most of his career as a special-teamer but did catch 21 balls back in 2013. We’ll continue to monitor this battle, but Bolden is still just a late-round flier.

This rookie has been buzzing at Bills camp, even picking up some 1st-team reps with Fred Jackson and Boobie Dixon sidelined. Williams goes 6’1, 230 pounds with 4.4 speed. He obviously won't challenge RB LeSean McCoy for the starting spot, but it's possible that he makes a run at the backup job. That'd make Williams a fantasy option if McCoy goes down.

Wright is more comfortable in the playbook this year and has developed nice chemistry with QB Marcus Mariota, according to WR coach Shawn Jefferson. Still only 25, Wright is an intriguing bounce-back candidate in 2015 – and a solid value at his 11th-round ADP.

The rookie is off to a strong start in camp and has a shot to be Randall Cobb’s direct backup. That’d make Montgomery an intriguing waiver-wire add if Cobb goes down.

Reed spent the week dealing with a hamstring injury and getting called out by his HC. But his stock still went up because TE Niles Paul, who was listed ahead of Reed on the depth chart, suffered a season-ending ankle injury in the preseason opener. That gives Reed another shot to take hold of the lead job. There’s still TE1 upside here when he’s healthy.

This former basketball player is currently Arizona’s starting TE and will be “really, really hard” to beat out, according to HC Bruce Arians. Fells will spend a lot of time blocking, though, and will share targets with TEs Jermaine Gresham and Troy Niklas. Avoid all 3 guys in fantasy drafts.

Pittsburgh inked Hartley this week to replace the injured Shaun Suisham. Hartley has drilled 81.7% of his career FG attempts and will be a viable fantasy option this season. Suisham ranked 15 th in FG attempts, 7th in XPs and 7th in fantasy points last year.

A promising start to training camp was cold-clocked by then-teammate IK Enemkpali. Smith’s broken jaw is expected to cost him 6-10 weeks. And there’s no guarantee he gets the starting job back even when he’s healthy. Smith is now undraftable.

Rough week for Gurley’s fantasy stock. HC Jeff Fisher said the backfield will be a “rotation” even when the rookie is healthy. Gurley admitted that he’s not sure if he’ll be ready for Week 1. And NFL Network’s Ian Rapoport wrote that the Rams are expecting Gurley to miss “a couple games.” There’s still plenty of upside here, but fantasy owners can’t be counting on him as an early-season asset. We’ll see what this news does to Gurley’s ADP.

The rookie is dealing with a Grade 2 hamstring injury and was called out by HC Bruce Arians this week. Johnson still has a good shot to win the #2 job if he can get healthy. For now, though, he’s just a late-round flier.

White has reportedly struggled since the hitting started at training camp. The same thing happened last year. We’ll see if he flashes in preseason action, but he’s tough to recommend as a draft target at this point.

He’s struggled with ball-security in camp and has already been passed on the depth chart by rookie Karlos Williams. Brown is on the roster bubble and isn’t draftable in fantasy football.

Ertz will miss the entire preseason after undergoing groin surgery this week. HC Chip Kelly expects him back for Week 1, but we now need to worry about re-injury and what kind of shape Ertz will be in. The missed time also isn’t ideal for a guy hoping to earn more playing time. Ertz remains a high-upside fantasy pick, though, and this injury might lower his ADP.

Donnell is sitting behind Daniel Fells on the Giants’ initial depth chart. That could be because he missed most of the spring with an Achilles issue, but it’s certainly a situation worth monitoring over the next few weeks. Donnell is still a fine pick at his dirt-cheap ADP.

Hill has missed some camp time with an injury and been “underwhelming” when on the field, according to insider Nick Underhill. Veteran TE Ben Watson has reportedly been more involved in the passing game and is currently listed atop the depth chart. Hill is still the more intriguing fantasy option, but he’s just a late-round lottery ticket.

Paul is done for the year after dislocating and fracturing his ankle in Thursday night’s preseason opener. It's a horribly timed injury for a guy who was coming off a personal-best 39-507-1 line last year and primed for a bigger role in 2015.

Suisham tore his ACL in last weekend’s Hall of Fame Game and will miss the entire season.