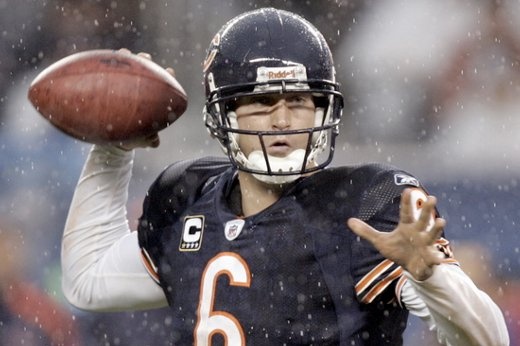 Cutler has been on point this preseason, completing 72.7% of his passes with 2 TDs and 0 INTs through 2 games. If he can stay healthy this season, Cutler has top-5 fantasy potential.

It was an up-and-down week for Manziel. After a solid preseason debut, the rookie reportedly pulled ahead in the QB competition. Then the Browns announced that Manziel and Brian Hoyer will split 1st-team reps in the 2nd exhibition. Manziel’s momentum was halted, though, when we learned that he was late to a team meeting this week. Still, he seems closer to the starting job now than he was last week.

Cassel outplayed Teddy Bridgewater in Minnesota’s 1st preseason game and will draw the start in the 2nd. The veteran is a strong favorite to be under center come Week 1. He’s still not worth drafting in standard fantasy leagues.

Charles Sims’ broken ankle should mean a few extra touches per game for Martin. The rookie was looking like a serious threat to steal significant passing-game work. Martin now sits 10th in our non-PPR Rankings and 11th in PPR.

We’re not too concerned with the fact that White is averaging 2.6 yards per carry through 2 preseason games. We’re more intrigued by the fact that he’s seen significant action with the 1st-team offense. It’s looking like White will be a real factor in New England’s backfield this year. Stevan Ridley’s fumble on Friday night certainly didn’t hurt White’s stock.

Grimes has come out of nowhere to land in the #2 spot on Houston’s depth chart. He’ll need to hold off the underrated Alfred Blue and veterans Ronnie Brown and William Powell. The Texans’ #2 RB could be a fantasy factor this season considering Arian Foster’s injury history.

Murray is over last year’s ankle injury and impressing in camp. Insider Scott Bair believes he’s "poised to make an impact in the regular season." Murray is an intriguing late-round flier in deeper fantasy drafts.

Robinson is averaging 5.4 yards per carry through 2 preseason games and has clearly outplayed RBs Jordan Todman and Storm Johnson. Robinson is likely looking at just a few touches per game behind Toby Gerhart. But he’d become an intriguing fantasy option if Gerhart misses time.

Reports on Wayne’s return from last October’s torn ACL continue to be positive. He’s a nice value at his 8th-round ADP.

The rookie has been the “star of Panthers camp,” per ESPN’s David Newton. Benjamin has quickly formed a tight bond with QB Cam Newton and is a strong favorite to lead Panthers WRs in targets this season. Benjamin could wind up being a steal at his 10th-round ADP.

Hunter blew up for 111 yards and 2 TDs in Friday night's preseason game. We know this kid has a top-notch combination of size and athleticism. It's nice to see him cashing in on it.

QB Sam Bradford became the latest to praise Quick’s progress this week. The former 2nd-round pick has been a staple in St. Louis’ 1st-team offense in camp. He’s worth a late-round flier in fantasy drafts.

Marvin Jones’ broken foot means Sanu will open the season in Cincinnati’s starting lineup. He’s reportedly had an impressive camp, but it’s tough to get excited about a guy averaging 9.7 yards per catch for his career. And Jones figures to take back over as the Bengals #2 WR in some point in October. We’re still not very interested in drafting Sanu.

GM Steve Keim called Brown the most impressive rookie WR he’s seen since Anquan Boldin. Of course, Boldin posted a massive 101-1,377-8 line in his debut season. Brown won’t come close to that production this year, but he certainly seems capable of passing Ted Ginn for #3 WR duties. That makes Brown worth considering at the end of your best-ball draft.

Housler worked with the starters in the preseason opener. Previous reports had him 4th on the depth chart, but it looks like he'll at least see time in 2-TE sets with John Carlson. Still, Housler figures to be tough to trust in fantasy with all the other weapons in Arizona.

The rookie is making a real run at Jay Feely’s starting job. Catanzaro nailed 31 of 33 FG attempts (94%) over his final 2 seasons at Clemson and left as the school's all-time leading scorer. The winner of this battle will be a viable fantasy starter. But you should avoid the situation in drafts for now.

CBS’ Jason La Canfora left Cowboys camp believing that Romo still “isn’t himself” after December back surgery. We’re curious to see how he looks in this weekend’s preseason action. Romo retains big fantasy upside, but you should secure a high-quality backup if you draft him as your starter.

Bridgewater struggled in his preseason debut and then had a rough week of practice. The rookie will likely open the season on the bench. We’re still expecting to see him take over for Matt Cassel at some point this year, but Bridgewater isn’t worth drafting.

He’s losing ground to Johnny Manziel. Even if Hoyer opens the season as the starter, he won’t stay there long. Don’t bother with him in fantasy drafts.

Ridley moved down our rankings because he fumbled in Friday night’s preseason game. Vereen fell because he’s carried just once through 2 exhibitions. Both guys dropped because rookie James White appears to be a significant part of New England’s backfield plans.

Sims broke his ankle in practice and is expected to be sidelined 12-14 weeks. That puts him out until November. And it's tough to see him making a fantasy impact the rest of the season considering all the time he'll have missed. Sims is now off the redraft radar.

Brown was released by the Texans this week and passed through waivers unclaimed.

Rough week for Bowe. We learned on Thursday that he’s dealing with a finger injury that’s been causing drops in camp. Then the league announced on Friday that Bowe is suspended for Week 1 for last year’s marijuana arrest. We’re not interested in Bowe at his 9th-round ADP.

Jones suffered a broken foot in practice. The Bengals reportedly expect him back after their Week 4 bye. A healthy Jones should quickly assume #2 WR duties, but he’s only worth drafting in deep fantasy leagues.

Feely’s job is reportedly being threatened by rookie Chandler Catanzaro. Avoid both guys until a winner emerges.