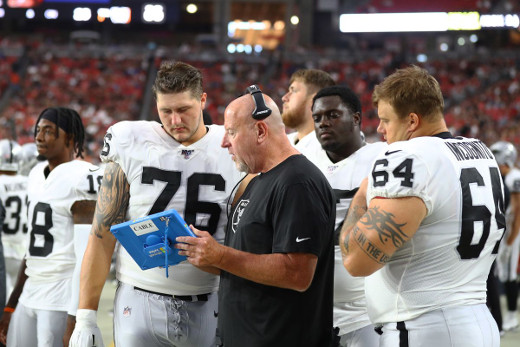 Offensive lines are often overlooked in the fantasy space. But they have the potential to make or break fantasy seasons.

Today, we're putting 6 units under the microscope -- 3 of the projected best, and 3 with some serious question marks. Note that O-line play is considered when compiling our Preseason Projections.

We know a familiar coaching staff helped attract Philip Rivers to Indy. But the O-line was another selling point.

Nelson’s played like an elite guard since entering the league in 2018. He’s a 2-time All-Pro who’s yet to miss a game.

Kelly rebounded from injury trouble in 2017 and 2018 to play a full slate last year. His 73.0 overall PFF grade marked a career high.

Glowinski isn’t a headliner, yet he finished a respectable 48th out of 82 qualifiers in PFF grade. His number dropped by 10.1 points from 2018, so we know there’s room for a rebound. Smith looks like a player on the rise after making a year 2 jump, particularly in run blocking. He deserves credit for the Colts reaching 2,000 rushing yards for the first time since 1994.

After allowing a whopping 46 total pressures, though, his pass blocking bears watching.

Overall, the Colts recorded a Pass Block Win Rate of 65% — 3rd best league-wide. Per ESPN, PBWN “tells us the rate at which linemen can sustain their blocks for 2.5 seconds or longer.”

Rivers’ brings further decline risk, but he’s at least a spot-start option. And the backfield looks poised to build off a strong 2019.

The Saints have continued to supply Drew Brees — now 41 — with a high-end O-line.

“We recognize he was a heck of a center the last couple years at Michigan and we recognize his value in that area,” O-line coach Dan Roushar said in June. “And I think it’s between [HC] Sean’s (Payton) direction and as we see this thing taking shape the ability to make a move with Erik and slide Cesar and or go the other direction with it. Those things will be determined as we come to camp and attack this thing.”

The 21-year-old has learned both positions during the virtual learning period. Payton noted that Ruiz “made all the calls” along Michigan’s line, adding that he’s “really sharp” and a fan of the rookie’s “consistency and makeup.” So expectations are understandably high for the Round 1 pick.

As a rookie, McCoy ranked 4th among centers in PFF grade. He allowed just a single sack and contributed significantly to a unit that ranked #1 in Football Outsiders’ Adjusted Line Yards.

All 5 starters return from 2019. On paper, they’re loaded with talent, but health will be key. Brown and Jackson missed 5 games last year; Incognito missed 4; Hudson sat out 1.

When together, we saw this unit excel. Oakland ranked top-6 in Adjusted Line Yards and Adjusted Sack Rate. The tackle spots bring intrigue with Miller (6’8, 309 lbs.) and Brown (6’8, 380) providing the league’s biggest tandem. A 2018 Round 1 pick, Miller noticeably improved in year 2 with his PFF grade jumping from 49.2 to 64.9. Brown earned a Pro Bowl nod for his work in pass protection.

Incognito and Hudson combined to allow a single sack on 923 total pass-blocking snaps. Jackson, 29, is likely past his prime. He posted his worst career PFF grade in 2019 (61.8) but missed a chunk of training camp — and the first 5 games — with an MCL sprain. We wouldn’t call a healthy Jackson a liability.

Add it up, and you have the potential for Derek Carr to find downfield success with rookie speedster Henry Ruggs. Josh Jacobs looks poised to build off a rookie year that brought 1,316 total yards in 13 games.

Miami’s O-line was a train wreck last season. The mishmash unit surrendered the highest Adjusted Sack Rate (11.2%) while failing to provide any pop in the run game. Unbelievably, Miami RBs mustered only 2.96 yards per carry. Per Football Outsiders, Miami RBs were hit at or behind the line of scrimmage on a league-high 26% of their carries.

There wasn’t enough talent on this unit to begin with. But the Fins rolled out 13 different linemen — so continuity wasn’t there, either.

Turning the page, HC Brian Flores is cautiously optimistic that 2020 will be a year of improvement.

”I think we feel good about the (offensive linemen) we’ve selected, but at the same time there’s a long road ahead," Flores said via Palm Beach Post. “On the offensive line or the defensive line, it’s a team game. We’ve got to get to know each other, trust each other and build communication. So we’ve got a long way to go.”

The Fins are likely to have as many as 4 new starters, including Jackson, Flowers, Karras and Hunt. Starting 2 rookies — Jackson and Hunt — will always bring some type of unknown. Jackson, 21, is on the raw side and struggled some against top competition (like Iowa’s A.J. Epenesa). Hunt looks like a plug-and-play option who might also kick out to RT.

Flowers, a flameout at tackle, supplies serviceable play at LG. Karras enters year 5 after starting just 1 year (2019) in New England. That recent experience is nice, but his Pro Football Focus grades paint the picture of a replacement level player.

Sure, this unit will improve off 2019. But combine the new faces with minimal practice time, and there’s reason for some concern. They’ll run through the gauntlet early on with opening games at New England and vs. Buffalo.

The fate of this line is largely in the hands of Williams, who’s tasked with protecting Joe Burrow’s blindside. The 2019 Round 1 pick missed all of his rookie year with a torn labrum.

O-line coach Jim Turner — returning for his second season — had this to say on the young lineman: "You don't have to go far to see how character can help our team. Bringing him in here makes a difference for us that way at left tackle. He's what you want when it comes to character. Will he be a great player? We project he'll be a heck of a player or we wouldn't have brought him in here in the first round. If you watch how he performs and how dedicated he is and how smart he is, all the pieces fit.”

Former Cowboy Su’a-Filo is the new arrival. Turner didn’t hold back in his praise for the 29-year-old.

"First of all, you watch the tape and he's a finisher," Turner said. "He's in great condition. He plays as well in the fourth quarter as he does in the first quarter. The tape tells you the kind of toughness and character you want. You spend time with him and he's a soft-spoken guy, but you can just feel it from him. A presence. This is a guy that wants to be a great player and he wants to be a part of everything Coach Taylor is putting together."

Jordan, Hopkins and Hart were underwhelming in 2019. Allowing Hart to start for another season is particularly discouraging. Among PFF’s lowest graded full-time tackles, he allowed a massive 38 pressures, which translated into 6 sacks. Somehow, his marks were even worse in run blocking.

The Bengals’ run blocking at least improved down the stretch in 2019. Turner noted that the team abandoned HC Zac Taylor’s zone scheme for a more man-heavy approach. That helped Joe Mixon improve his yards per carry from 3.2 over the first 8 games to 4.6 over the final 8.

As for Joe Burrow, the Bengals have surrounded the top pick with plenty of pass-catching weapons. But his high-level processing and pocket movement better translate right away. This unit will be tested with opening games against the Chargers, Browns and Eagles.

We know Mixon can overcome a lackluster O-line. Reaching his top-5 ceiling will require more cooperation up front, though.

2019 injuries leave this line unsettled beyond the tackle spots. G Joe Noteboom suffered a torn ACL and MCL in Week 6. C Brian Allen landed on IR with a knee injury, but not until Week 10. Havenstein also sustained a Week 10 knee injury and was a healthy scratch down the stretch.

Turning 39 in December, Whitworth is the league’s oldest lineman. He remained a strong pass blocker in 2019, but his overall PFF grade took a noticeable hit. His mark of 72.8 snapped a streak of 6 seasons at 80+. Whitworth’s missed only 1 game over the past 6 seasons, but durability will remain under the microscope for a guy with his wear and tear.

"For us, we feel great about Whitworth and Havenstein," HC Sean McVay said, via the team’s official site. "We value those positions equally."

The interior has 5-6 guys competing for 3 spots.

Bobby Evans took over for Havenstein at RT and impressed McVay, leading him to say “I’m not convinced that guy couldn't play guard” in June. But he’s not necessarily considered a favorite ahead of Corbett and Edwards. Corbett is a former Round 2 pick but played at a replacement level last year. Edwards saw extensive action as a rookie — mostly at RG — but didn’t provide much pop. He added 9 penalties — tied for second-most among guards.

Blythe re-signed in March on a 1-year deal worth nearly $4 million, so he’s the early favorite to start. He split time between center (547 snaps) and RG (466 snaps), yet the results never surfaced. Blythe — only listed at 298 pounds — surrendered 38 pressures on 649 pass blocking snaps and managed a bottom-barrel 47.5 PFF run blocking grade.

Noteboom and Allen return to add options — although not clear solutions — to the Rams interior.

The concern here is that the Rams will rotate through a bunch of combos once training camp arrives. Settling on the best one quickly will be vital given the lack of on-field work -- especially with rookie Cam Akers expected to see lead back touches.