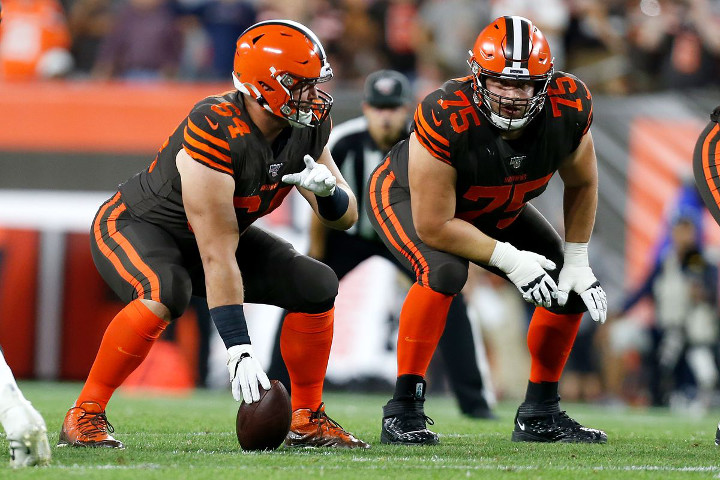 Yesterday, we presented the data on O-line play and its correlation to fantasy production.

Today, we’re looking at which 2021 units we can trust — and which ones with the most to prove.

* Note: Players' Pro Football Focus ranks are based off a minimum of 100 pass-blocking or run-blocking snaps.

Credit OL coach Bill Callahan for bringing this unit together over a virtual offseason.

Most impressively, he aided Wills’ transition from college RT to pro LT. His 79.4 PFF pass-blocking grade ranked 22nd among 95 qualifying OTs (and 2nd among rookies). The 10th overall selection,

With all 5 starters returning,

Nick Chubb
should strut into a contract year.
Baker Mayfield
is setup well, too. Per PFF, he averaged 2.80 seconds to throw on drop-back passes — 2nd longest behind
Josh Allen
.

Slater
arrived as a top-15 pick. While undersized for the position (6’4, 304 lbs. with 33” arms), he’s a premier athlete with 3 years of starting experience.

Feiler came over from Pittsburgh on a 3-year, $21 million deal with $14.5 million guaranteed. A 6’6, 330-pounder with nearly 2,700 career snaps, Feiler projects as a clear upgrade on Forrest Lamp (now a reserve in Buffalo).

Linsley joined the squad on an even pricier deal: 5 years, $62.5 million, with $25 million guaranteed. A 1st-time All-Pro last year, Linsley graded as a top-5 run and pass-blocker.

Aboushi enters year 8 on his 6th team. He’s never been able to retain a starting role over 16 games, so he may be on thin ice. Aboushi's 1-year deal netted just $1.6 million.

All in all, it’s a net positive for

Justin Herbert
, the game’s most pressured QB of 2020. Plus, adding
Slater
alone could boost the number of explosive gains from
Austin Ekeler
on screens. This unit is just one reason why he’s a top-8 PPR back.

So you know health is key here.

Brooks
and
Johnson
combined to miss 32 games.
Brooks
is most concerning as he works back from a torn left Achilles from mid-June, 2020. He also tore his right Achilles during the 2018 postseason.

When together, this unit looks strong. We’ll keep an eye on the LT spot, where Mailata -- a pillar at 6'8, 346 pounds, and a rugby player until 2018 -- looks to hold off former 1st-rounder Andre Dillard. Dillard is behind after missing all of last season with a torn biceps.

Even if this unit struggles, it’s important to remember that HC Nick Sirianni’s offense plans to utilize more quick passing.

Interestingly, the Colts (where Sirianni worked as OC) and the Chargers (where new

DeVonta Smith
,
Jalen Reagor
,
Miles Sanders
and
Kenneth Gainwell
, the proper personnel is in place for a trend to develop.

Reiff, 32, remained a starting caliber player in 2020. But the former Viking and Lion will transition from LT to RT after playing on the right only once across 9 seasons (2016).

Williams
showed promise as a pass blocker in what amounted to his debut season. (His 2019 was wiped out by a torn labrum.) Even then, he lost 6 games to knee and neck injuries.

Carmen, a Round 3 rookie, projects along the interior after playing LT at Clemson. He’s huge at 6’5, 335 pounds, but he’s unlikely an impact player right away.

Hopkins
is working back from a Week 17 ACL tear, while Spain’s starting role looks shaky after an ugly 2020. His 44.8 run-blocking grade ranked 89th among 105 qualifiers.

Returning OL coach Frank Pollack — who led this unit back in 2018 — will have his hands full. Still, the offseason buzz hasn’t stopped for both the passing game and

There’s nowhere to go but up on the pass-blocking side. In addition to the ugly PFF rank, the Giants ranked dead last in ESPN’s pass block win rate metric (46%). For comparison,

Green
Bay finished at the top with a 74% PBWR.

So it’s no wonder

Daniel Jones
took 45 sacks while dropping back only 516 times.

Now, they’ll bank on returning youth for improvement, with all 5 starters at age 26 or younger. Getting more out of

Thomas
— the team’s top pick in 2020 — is the clear focus. While he improved late last season,
Thomas
still allowed the 2nd most pressures among OTs — despite ranking 24th in pass-blocking snaps.

If the offseason theme continues, we’ll see how Hernandez transitions to RG. He’s played all 2,618 snaps as a pro on the left side. A clean prospect coming out of UTEP, 2021 is something of a make-or-break season.

It's a tall task overall for first-time OL coach Rob Sale — the OC/OL coach at Louisiana Lafayette from 2018-2020. He’ll look for continuity after the team shuffled through a pair of OL coaches last fall (Marc Colombo/Dave DeGuglielmo).

One name not listed above: Nate Soldier. The long-time Patriot enters the 2021 season with 127 career starts. He missed all of 2020 as a COVID opt-out and struggled in 2019, making him a better fit as a reserve. The 33-year-old ranked 71st out of 87 OTs in PFF run-blocking grade; 53rd among 92 OTs in pass-blocking.

Clearly, there’s a lot that needs to go right for

Daniel Jones
to experience a true year 3 breakout. The O-line is also a potential hurdle for
Saquon Barkley
, who may be limited come September.

Pittsburgh’s O-line won’t automatically bust because of inexperience. But there’s no doubt it’s the unit with the most to prove.

Turner
’s 2020 turned up 7 missed games (groin, chest) and a scary drop-off in performance. His 29.8 run-blocking grade ranked last among all guards.

Elsewhere, Hassenauer will be pushed by B.J. Finney and rookie Kendrick

Green
. Hassenauer saw the most first-team reps in OTAs, but he played replacement-level ball on 303 snaps last year.

It’s a lot to digest, especially with a 1st-year OL coach (Adrian Klemm) joining the squad. And it's certainly not an ideal situation for 39-year-old

Najee Harris
— we’d have concerns if not for a hefty workload projection. His 320 projected touches would have ranked 3rd among RBs last season.