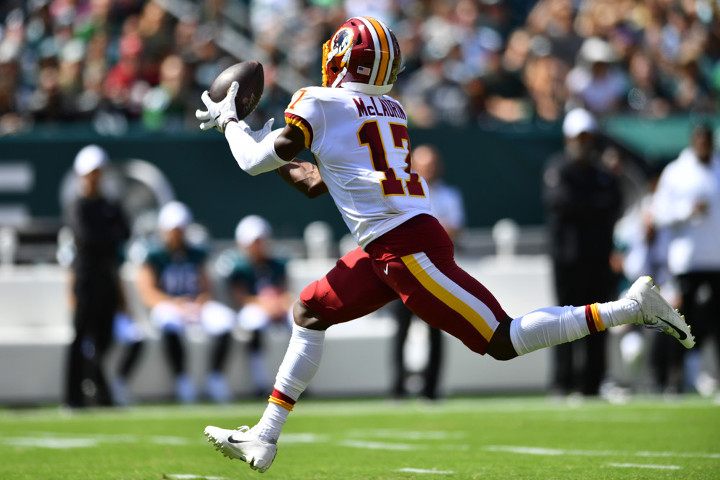 You don't want to just win your fantasy league. You wanna crush your fellow owners. Make them not wanna play in the league next year. Maybe quit fantasy football altogether.

If you're taking that mindset into draft day, here are the high-upside league-winners to target in each of the first 10 rounds.

A Round 1 RB in fantasy and reality, it’s easy to envision a massive season from CEH. You know the Chiefs are scary good with Patrick Mahomes, but consider that they ranked top 6 in scoring, yards and yards per play despite him missing 2 games last year.

At bottom: Can he overcome an adverse offseason? And can he stay on the field for critical passing down snaps?

“He’s strong,” HC Andy Reid said in late August, via USA Today in late August. “He’s short, but he’s strong. So, he gets himself in good position with his quickness and his leverage and does a good job in protection.”

OC Eric Bieniemy had this to say on his new protégé (also via USA Today):

“So, am I going to say he’s perfect? No, he’s not perfect, but I’ve enjoyed watching the progress that he has made each and every day. Then, when you’ve got a kid that can explain to you why he made a mistake, that’s when you know he’s getting it. So, he’s doing a heck of a job. I know he’s going to do everything under the sun to help us to do better in what we need to, but also too, he understands the importance. If you don’t protect that damn quarterback, you can’t play.”

There’s inherent risk in a 21-year-old NFL newcomer. You simply couldn’t ask for a better situation. Edwards-Helaire's fantasy ceiling extends into the top 5 at his position.

Hill’s 2019 was disrupted by a nasty Week 1 shoulder injury that forced 4 absences. Still, Hill proved excellent upon returning by ranking 5th among WRs in PPR points.

The Colts used the 41st overall pick on Taylor, one of the most prolific college RBs ever.

We like his chances of being featured prominently this season.

Now, Marlon Mack’s skill set is above that of a strict backup. Multiple Colts beat writers — including The Athletic’s Stephen Holder and Zak Keefer — have stated that Mack will remain a key contributor to open the season. But we know it doesn’t take long for one RB grab a backfield stranglehold. We’re expecting that to be Taylor, who’ll enjoy the benefits of playing on a run-first team with a top O-line.

With 200-yard outings in 3 straight seasons, Cooper’s ceiling games have been legendary.

Simply put, we're buying heavily into this Cowboys offense. And Cooper remains its #1 option in the passing game.

You can read me gush over McLaurin in the 2020 Breakout article. Since then, his target competition has only weakened. Here’s what HC Ron Rivera said recently about rookie WR Antonio Gandy-Golden (via NBC Washington):

"He’s got to learn what he’s supposed to do. He’s still a young guy, he’s still making mistakes out there. First, you’ve got to understand where to get lined up, understand where the motion and movement is for him to do those things and how to do his routes. How to tempo himself, how to get down field and how to put himself in position," Rivera said. "Then how to use that good size that he has. He’s a big-bodied receiver. Sometimes these young guys come in and they want to play like a small receiver. They’re not and he’s not. He’s a big, physical player who’s got to use his strength. He’ll get a feel for that, it’s just a matter of time. He’s just got to keep practicing hard.”

Staying healthy is the key for Brown; he played through foot pain last year after suffering a Lisfranc injury in January. The surgically repaired left foot included an inserted screw, which was only removed early in 2020.

Since then — and especially in recent months — reports on Brown have been all positive. He’s added weight with an effort to improve durability, all while maintaining his speed.

And that was as a rookie with a limited offseason — plus a run-heavy offense. The offensive philosophy won’t change in 2020, but it’s easy to find 100+ targets for Brown in an offense that’ll provide plenty of downfield opportunities.

Round 7: Will Fuller, WR, Texans

You might say he’s injury prone, but let’s be honest here: All Round 7 picks have their flaws.

None have Fuller’s potential.

We’re talking about a former 1st-round pick who popped off for 14-217-3 in a single game last season. A 6’0, 184-pounder with 4.32 speed. And a contract year player poised for healthy volume following the departure of DeAndre Hopkins’ 150 targets. Flag Fuller as a prime WR3 target with week-winning upside.

You saw Higbee’s ceiling last year. No TE outscored him over the final 5 weeks.

Of course, Gerald Everett missed all but 1 of those contests. And Everett did out-target Higbee over the first 11 games. Given the latter’s late season success, though — and the Rams’ ability to go heavy with 2-TE looks — don’t expect them to significantly rein in Higbee.

Recall that the Rams inked Higbee to a multi-year extension last September that, at the time, made him the league’s 9th highest paid TE. The guarantee was nearly $16 million.

Everett, meanwhile, is entering the final year of his rookie deal.

Especially with Cooper Kupp banged up, Higbee has the potential to join the Zach Ertz/Mark Andrews tier.

It’s not often you’ll find a potential starting RB this late. In fact, this is somewhat of a pricey range for Harris, who went several rounds later prior to some camp buzz.

If he can land 200+ carries plus some passing-game work, he'll be a steal even at this elevated price tag.

We had to scramble a bit here; Jalen Raegor deserved this spot following his promising training camp. But it culminated with a labrum injury that’ll likely find him missing regular season games. That figures to sink his ADP by at least a round or 2, and we'd be buying that discount.

But we’ll pivot to — I know — another Chief. Sure, Hardman’s tough to like from a projections standpoint, at least with a healthy Tyreek Hill, Sammy Watkins and Travis Kelce.

But look at 2019. As a Tyreek-lite type, we saw Hardman explode for 26-538-6. While that type of efficiency is unsustainable, his 41 targets could certainly double.

Remember that Hardman didn’t play WR full time until 2017, so this is still a raw talent. Besides, it’s not like he needs to be some route-running master with defenses already spread thin. Add in some Mahomes magic, and we’re very likely to see several more spike weeks this fall.