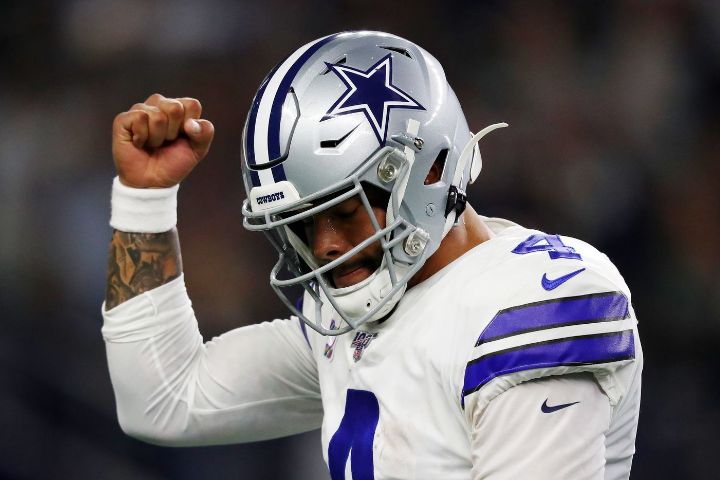 Dak tanked last week, his first game back from a calf injury. At home — vs. Denver — he mustered just 232-2-1 in a blowout loss.

While LT Tyron Smith will remain out, Dak will get Michael Gallup back. Dallas now fields perhaps the league’s best 3-WR set with Amari Cooper, CeeDee Lamb and Gallup (plus breakout TE Dalton Schultz). And you have to love the Atlanta matchup. The Falcons sit 24th in Pro Football Focus’ coverage grades; 32nd in pass rush.

With Dallas implied for a hefty 32.3 points, Dak’s in a strong position to rebound.

Cook’s legal issues could turn into a season-long headache. But he’s expected to play this week against a Chargers defense that essentially invites run-game production.

The Browns will be without RBs Nick Chubb, Kareem Hunt, John Kelly and Demetric Felton. In a similar situation, Johnson saw 22 of 26 team RB carries in his lone 2021 start (Week 7 vs. Denver). The results? 146 yards and 1 score.

It’s no wonder why he sits #1 in our $/point ranks among RBs.

Adams must be pumped to get Aaron Rodgers back. Last week, in a great matchup vs. Kansas City, Adams caught just 43% of his targets for 42 yards. He entered that one with a catch rate of nearly 72%.

While Adams has had some down target games, he’s still posted totals of 18, 11, 16 and 14 since Week 3. Sunday looks like a potential shootout vs. Seattle against a secondary that hasn’t been tested by WRs since Cooper Kupp and Robert Woods went off for 19-242 in Week 5.

I think he continues to roll against a Vikings pass D that’s 7th in fantasy points allowed to enemy WRs. They’ve allowed 3 WRs to hit 100 yards over their past 2 outings (Marquise Brown, CeeDee Lamb and Amari Cooper). With a game total of 53 and an implied team total of 28.3, the game environment looks ripe for fantasy production.

Keep an eye on the status of Chris Godwin, who missed practice Wednesday and Thursday with a foot injury before returning on Friday in a limited capacity.

If Godwin’s out, Johnson would project for 6-7+ targets against a weak Washington secondary. The Tampa Bay offense would be missing Godwin’s 10.2 targets per game, while Rob Gronkowski and Antonio Brown (with 62 total targets) will also remain out. Even if Godwin plays, Johnson will remain a viable WR3. Note that Scotty Miller might remain out as well.

This slate deprives us of Travis Kelce, Darren Waller, Mark Andrews and Mike Gesicki (thank goodness). You can pay up for Kyle Pitts, but I’ll go the cheaper route with Arnold.

The Jags haven’t had a true alpha WR step up this year, with Laviska Shenault’s role failing to grow and Marin Jones sputtering after a strong start. It all leaves Arnold as a solid target bet once again. The Colts rank a subpar 24th in DVOA vs. enemy TEs, per Football Outsiders, so the matchup looks just fine.

Lastly: Trevor Lawrence suffered a minor ankle sprain in Week 9, but he returned to the game and made it through a week of practice. The rookie should be a full-go.