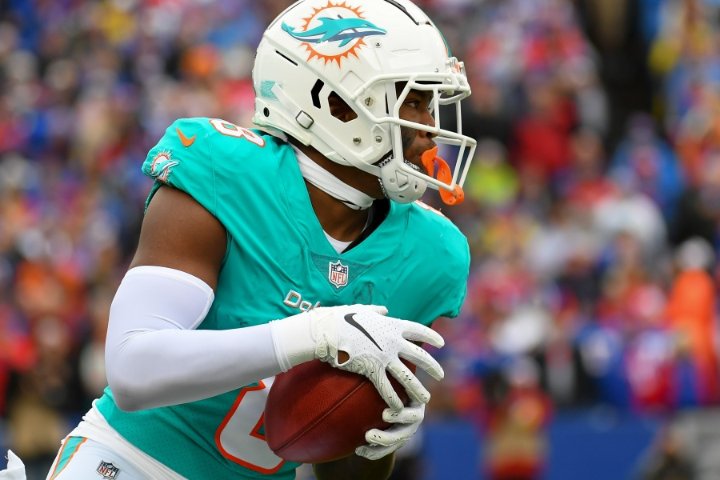 It wasn’t too hard for Dolphins S Jevon Holland to step into the spotlight in a Thursday night game that was difficult to watch.

The rookie, though, has now played more than 90% of defensive snaps in 6 straight games. S Brandon Jones has played 96%, 94% and 100% the past 3 weeks. So it appears that Miami has settled on riding its 2 young safeties after a lot of shuffling at the position early this season. And Thursday night’s results shouldn’t do anything to dissuade the Dolphins.

If Holland looked like he was in the backfield a lot on Thursday night, that’s because the rookie blitzed a whopping 22 times. His numbers were already high for a safety the previous 2 weeks at 8 and 7 before roughly tripling against Baltimore. That looks like a specific game plan for combating Lamar Jackson. So bet on Holland regressing toward the previous -- but still high -- rates.

Pro Football Focus has also graded Holland strong in coverage the past 2 games, and he put his ability in that area on display with a terrific pass breakup against Marquise Brown. Holland has the all-around skill set to become a consistent contributor to IDP lineups, even if he’s technically a free safety.

Jones is less of a real-life talent for the position, which could help his fantasy outlook as long as he stays on the field. Jones has logged 18, 12 and 17 pass rushes over his 3 full-time outings. He has also spent just 28.4% of his defensive snaps at free safety over that span.

We fantasy managers like when a safety is not playing deep, but rather lining up in the box or even in slot coverage.

Dolphins decision makers actually acknowledged that their 3rd-round pick of 2020 wasn’t great in coverage coming out of school. His PFF grades as a pro have backed that up, and that challenges his long-term outlook. But Jones’ role has grown throughout his 2nd season, and any coverage deficiencies should only motivate Miami coaches to align him closer to the ball -- rather than back deep.

LB Patrick Queen rebounded from 43% playing time to 67% in Week 8, coming out of Baltimore’s bye. That fell again to 52% against the Dolphins, though. And he trailed LB Josh Bynes in each of those 2 games. Bynes played 83% against the Vikings, then 74% on Thursday night.

LB Ernest Jones fell behind Troy Reeder in playing time vs. the Titans last week: 62% vs. 83%. He still beat Reeder 4-2 in tackles, but that level of playing time makes him tough to believe in for Week 10. We'll see where this goes.

LB Jayon Brown played 71% of snaps vs. the Rams in his return from the knee sprain. David Long still played 88%. We'll see what happens when Rashaan Evans returns. Evans is questionable for this week, but Long has been ruled out with a hamstring injury. So we'll have to keep waiting to see how this situation sorts out.

S Talanoa Hufanga played every snap for the 2nd straight game in place of Jaquiski Tartt in the loss to Arizona.

EDGE Markus Golden racked up 3 sacks vs. the 49ers, despite a season-low 47% snap share. That marked a dip for the 2nd straight week. He still presents upside vs. the Panthers in pressure-friendly IDP leagues this week, but we'll have to keep an eye on that playing time.

The injury picture looks busy for the Chargers this week. Joey Bosa 1st showed up on Thursday's injury report with an ankle issue, and then sat out Friday's practice. He's officially questionable for the game against the Vikings, though HC Brandon Staley says he expects Bosa to play. S Nasir Adderley is also questionable with an ankle injury that only allowed him a single limited practice Friday. Staley called him a game-time decision. CB Michael Davis is doubtful, but the Chargers will get CB Asante Samuel back after he missed last week with a concussion.

EDGE Quincy Roche delivered a sack among 2 QB hits in Sunday's win over the Raiders, his 2nd straight start in place of Lorenzo Carter.

CB Brandon Facyson played 100% of snaps for the 2nd straight game. CB Trayvon Mullen (toe) is eligible to come off IR whenever, but I haven't seen anything about when we can expect him.

EDGE Adetokunbo Ogundeji has played 71%, 74% and 68% of snaps in the 3 games Dante Fowler has missed. He doesn't have a QB hit since Week 5, though.

That might just make Ogundeji a perfect fill-in for Fowler. The veteran has totaled just 11 QB hits in 19 games with the Falcons. That includes just 3 in his 5 appearances this season.

Weekly playing time for #Jaguars DB Rudy Ford, who has moved to the primary slot CB spot the past 2 weeks in place of Tre Herndon:

The Bills will go without MLB Tremaine Edmunds in Sunday’s clash with the Jets. That should push Tyrel Dodson into his starting role, in a matchup with tackle upside. The past 2 Jets opponents have had a LB go for 11+ tackles.

Dallas lost DE Randy Gregory to a calf injury in practice this week. He landed on IR, meaning he’ll miss at least the next 3 games. The Cowboys remain without DE Demarcus Lawrence, who has been out since Week 1 with a foot fracture. With little else going at the position, we should probably expect more EDGE snaps for LB Micah Parsons.

Parsons spent weeks 2 and 3 as a full-time DE. Perhaps we get that again, but Dallas does have Dorance Armstrong available now to pair with Tarell Basham. Armstrong played 56% of the snaps back in Week 2, then missed the next 5 games with high-ankle sprain. He has returned for 38% and 41% playing time the past 2 weeks.

We’ll see about the plan for Parsons, who figures to at least see a little more time at DE. The whole situation could also boost LB Leighton Vander Esch’s playing time. LVE played 65% last week, his 2nd highest share of the season.

Rookie LB Baron Browning played every snap in Sunday's win at Dallas. Kenny Young climbed from 56% to 66%. Browning heads into Sunday’s game against the Eagles questionable with a back issue, but HC Vic Fangio said Friday he expects Browning to play.

Jonathon Cooper (90%) & Stephen Weatherly (89%) led EDGE group against Dallas, with Von Miller gone and Malik Reed and Bradley Chubb out. Cooper delivered his 1st 2 sacks as a pro but now has 5 QB hits over the past 3 games.

LB Logan Wilson played every snap for just the 2nd time all season in Sunday's loss to the Browns, his 2nd straight game of 95%+. Germaine Pratt trailed at 92%, while Akeem Davis-Gaither left with injury after just 4 snaps.

S John Johnson III rebounded from his Week 8 neck injury to play every snap in the Week 9 win over the Bengals. Ronnie Harrison played 84%; Grant Delpit 24%. Anthony Walker led the LBs at 83% after hitting 100% in 2 straight games.

LB Shaq Thompson continued to trail Jermaine Carter in playing time in his 2nd game back from the foot injury: 69% vs. 77%.

DB Kyle Dugger played a season-low 71% of snaps in Sunday's win over the Panthers. Seems like he lost some to LBs. CB Joejuan Williams saw his playing time rebound to 49% after a dip to 25% in Week 8.

The Vikings will have to go without Harrison Smith for the 2nd straight game. He remains on the COVID list. Rookie Camryn Bynum played every snap in Smith’s absence last week, racking up 12 tackles and a gorgeous, diving INT. High play volume (98 snaps) helped the tackles, but Bynum is clearly in a good position for IDP upside.

Willekes tested positive for COVID this week, so his absence will further stress the position against the Chargers.