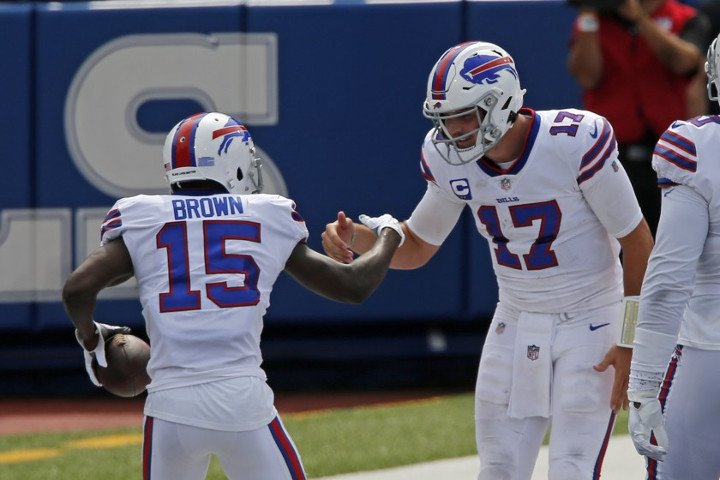 With an over/under of 56.5 points, this game will be popular. But by playing this trio of players together, it will be a little bit less owned than Allen to Stefon Diggs or Kyler Murray to DeAndre Hopkins.

Allen has shown a lot of improvement as a passer this year, sitting 3rd in the league in passing yards. The Josh Allen to John Brown connection was on point last week, as Allen threw for 415 yards with 99 of them going to Brown. Brown looked healthy, setting season-highs in targets, yards and catches and now faces a Cardinals team that lacks the CBs to hang with his elite speed.

In my Allen to Brown stacks, I will be playing a lot of Edmonds, who led all RBs in Week 9 with 28 touches. Edmonds played 96% of the snaps last week and his price went down on DraftKings, so he’s a great buy-low candidate in a plus matchup against the Bills’ 22nd ranked rush defense.

With an over/under of 55.5 points, this game seems impossible to avoid. Every Seahawks game tends to be back and forth with MVP favorite Russ Wilson lighting up the scoreboard and a historically bad pass defense allowing 300+ yards to opposing QBs like it’s nothing.

Russ to Lockett may go a bit under owned this week as Russ is priced up as the QB1 on FD and QB3 on DK. Lockett has been extremely quiet with less than 10 DK points in 4 of his last 5. But he has the better matchup in the slot, where he’s projected to go up against slot CB Troy Hill, who has allowed 23 of 29 passes to be completed in his coverage this season.

Woods is priced as the WR10 on DK and WR11 on FD and gets the nut matchup against the Seahawks, who have given up the most fantasy points to opposing WRs on the season.

Goff to Kupp makes a lot of sense this week with Kupp easily leading the Rams in targets this season with 17 more than teammate Robert Woods. The Seahawks run defense has been solid, ranking 9th against the run but 29th against the pass.

Sean McVay is an intelligent coach and probably watched tape on the Bills game plan where they only ran the ball twice in the first half against the Seahawks. I would expect a similar game plan here as Josh Allen torched the Seattle pass defense for over 400 yards, 4 TDs and 44 Bills points.

Goff should have elevated passing volume and with Kupp the main option they could combine for a monster game against one of the league’s worst pass defenses. Kupp has scored a TD in 3 of his past 4 games vs. the Seahawks dating back to 2018.

D.K. Metcalf is always in play as a bring-back option as he has shown that he is matchup proof. He’s been consistent all season with 92+ yards in every game besides Week 7 against the Cardinals. He has also scored 8 TDs through 8 games.

Allen has 32 more targets than Hunter Henry this season and 47 more than #2 WR Mike Williams. Herbert has been relentlessly targeting him and that should continue this week as the Chargers would be wise to keep Allen in the slot to avoid outside CBs Byron Jones and Xavien Howard.

Allen has 75 targets in his last 6 games with Herbert. And Herbert has been a monster himself with 15 TDs in his last 5 games and ranking as a QB1 in 6 of 7 starts.

Parker may fly under the radar this week and should be a volume monster with teammate Preston Williams landing on IR.

The Chargers defense hasn’t lived up to the hype this season, ranking 14th against the pass and 23rd against the run.