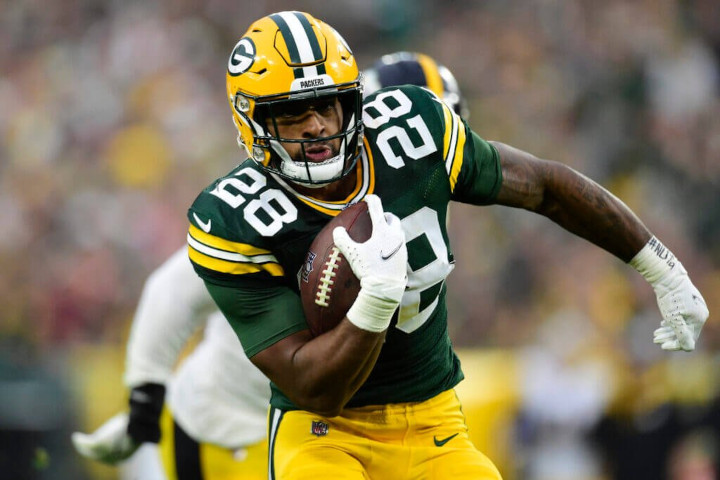 Tua Tagovailoa ($5,500) and Cam Newton ($5,100) are viable options if you wanna save money at QB. But your best bet is taking advantage of Mahomes’ lowest main-slate price of the season.

He busted out of a 3-game slump last week with a monster 5-TD, 39.2-DK-point outing. Those prior 3 games were the only times this season that Mahomes failed to reach 21 DK points. He has 5 games of 28+ points.

Sunday’s game vs. the Cowboys has shootout written all over it, with a 56-point over/under. Kansas City’s 29.25-point implied total is highest on the main slate.

CMC racked up 13 carries and 10 targets last week. He tallied 26.1 DK points -- without scoring a TD or hitting a 100-yard bonus. And there might be room for more volume going forward considering McCaffrey played “just” 59% of the snaps in a blowout win.

He gets a Washington defense on Sunday that’s been fairly tough against the run this season. But The Football Team sits 21st in Football Outsiders’ RB coverage rankings. Look for McCaffrey to do damage in the passing game.

Dillon is a virtual lock to dominate RB carries, with former undrafted free-agent Patrick Taylor behind him on the depth chart. Dillon has averaged 4.3 yards on 97 carries this season, ranking 6th among 51 qualifiers in Pro Football Focus’ rushing grades.

The big question is how much work Dillon will take over in the passing game. He’s averaged 1.8 targets per game this season, while Jones leaves behind 4.7. Don’t bank on Dillon picking up all of Jones’ work, but any extra target volume would be big. Dillon entered the NFL with a sparse pass-catching resume but has been good in that department this year, posting an 89% catch rate and 12.3 yards per catch.

Really, though, Dillon is a nice value at $6,200 just for the rushing projection. Anything we get in the passing game is a bonus.

Arizona laid an egg with Colt McCoy under center last week. Conner still managed to score 15.4 DK points thanks to a late TD.

More importantly, though, he got strong usage in his first full game without Chase Edmonds. Conner played 82% of the Cardinals’ snaps, ran a route on 53% of pass plays, received 10 of the 16 RB carries and saw 4 targets (a 14% share).

That type of usage should lead to RB1-level production when the Cardinals offense plays better. That should certainly be the case if Kyler Murray returns this week. If Murray remains out, Conner becomes more of a fringe cash play.

Sunday’s matchup is excellent vs. a Seahawks defense that ranks 31st in both DK points allowed to RBs and adjusted fantasy points allowed.

The WR1-level usage should continue this week with DeVante Parker and Will Fuller still out. Plus, Waddle gets a luscious matchup vs. a Jets team sitting dead last in Football Outsiders’ pass defense DVOA and 28th in adjusted fantasy points allowed to WRs.

Higgins hasn’t scored since Week 2. But he’s averaged 8.4 targets over his last 5 games -- just 1.2 fewer than Ja’Marr Chase. And Higgins ranks 9th among WRs in expected fantasy points per game over the last 4 weeks.

Sammy Watkins returned last week and Bateman’s playing time shrunk a bit. But the rookie still saw 8 targets for the 2nd straight game, coming away with a 6-80 line in a total dud from the Ravens offense. Bateman has now hit double-digit DK points in 3 straight, despite not scoring a TD.

Baltimore should bounce back vs. a mediocre Bears defense on Sunday. Chicago ranks 19th in Football Outsiders’ pass defense DVOA and 22nd in adjusted fantasy points allowed to WRs.

I’ll spare you another Dan Arnold writeup, but Jacksonville’s target leader over the last 3 weeks remains a nice value at $4,100.

The $700 you can save by going down to Kmet might be useful, though. The Bear actually pops as our top points-per-dollar value at TE. Kmet has averaged 6.3 targets per game over his last 4. He gets a Ravens defense on Sunday that’s weakest in TE coverage. Baltimore sits 27th in adjusted fantasy points allowed to TEs and 16th in Football Outsiders’ TE coverage rankings.

Our 3rd straight week highlighting the Panthers defense. They’ve come through for us with 7 and 12 DK points the last 2 weeks and remain underpriced now.

The Panthers are 3-point home favorites on Sunday for a Washington team that’s allowed the 11th most DK points to DSTs this season. Washington’s 20-point implied total is 5th lowest on the main slate.