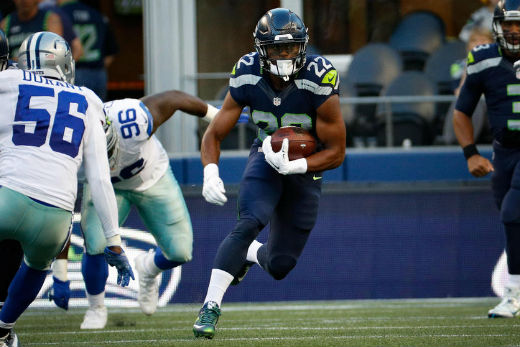 Cousins is owned in about two-thirds of ESPN leagues, but it’s worth checking to see if he’s available in yours.

Next up is a battered Packers secondary that just yielded 5 passing scores to the Titans. After that comes a fairly neutral matchup at Dallas before tough road games at Arizona and Philly. Week 15 at home against Carolina looks like a nice spot in the fantasy playoffs (for many leagues), though, and Week 16 at Chicago could find Cousins starter worthy as well.

Owned in less than one-third of ESPN leagues heading into this weekend, Prosise got the start at New England—despite Christine Michael being active and involved. The rookie proceeded to lead the offense in most categories.

Prosise took 17 of the 23 RB carries for 66 yards (an unspectacular but decent 3.9 per rush). He also caught a team-high 7 passes for a team-best 87 yards while trailing only Doug Baldwin by 1 target.

Thomas Rawls is due back any week now, which will further muddle the rushing picture. And a healthier Michael might still get more carries than he did Sunday night. But Prosise has impressed his team in recent weeks and looks like he’s becoming an important offensive piece. His receiving role – which included routes from WR spots against New England – will keep him prominent even if he falls behind Rawls for carries.

But there’s also the chance that Rawls doesn’t prove to be anything near the player he was last year, or that Seattle simply eases him back in hopes of having a fresh, full-power Rawls for the playoffs. Those scenarios could find Prosise working as the lead back the rest of the way.

Most of the potential outcomes here make Prosise worth heavy investment on your waiver wire this week, especially in an offense that seems to be getting healthy. Consider throwing the rest of your remaining budget at him in a PPR league where you need the RB help.

Kelly remained available in 58% of ESPN leagues heading into Sunday’s game against the Vikings. He operated as Washington’s feature back in that one, carrying 22 times for 97 yards. He lost just 4 carries and 3 targets to Chris Thompson. RB Matt Jones was a healthy scratch, so this is clearly Kelley’s job for the immediate future.

His next 3 opponents rank 5th or better in fantasy points allowed to RBs, but volume will make Kelley a starting option.

Starks didn’t post big numbers in his 1st game back from knee surgery: 44 total yards and a score. But he operated as Green Bay’s lead back, carrying 7 times and hauling in 3 of 4 targets. Ty Montgomery finished with 3 carries and 2 targets, while Don Jackson was a healthy scratch.

Look for Starks’ volume to grow at least a bit going forward, starting with a plus Week 11 matchup against the Redskins. Matchups with Houston in Week 13 and Chicago in Week 15 look like the other best spots.

The rookie was easily Baltimore’s best RB in Thursday night’s win over the Browns.

Despite getting out-carried 21 to 6 by Terrance West, Dixon finished with just 27 fewer rushing yards. He averaged 6.3 yards per carry to West’s 3.1 Dixon was also impressive in the passing game, hauling in 5 of 7 targets for 42 yards.

Don’t be surprised if his role grows further in next week’s game against the Cowboys. Baltimore figures to be a heavy underdog there, and more passing volume would likely help Dixon. The Ravens are also sure to be heavy underdogs in Week 14 at New England and Week 16 at Pittsburgh. We’ll see if Dixon can turn into a dependable option by then.

Seahawks HC Pete Carroll said Saturday that he doesn’t yet know whether Rawls will play against the Eagles in Week 11, but he hopes to have the 2nd-year back in that game.

“We’ll just go to next week and see what happens,” Carroll said, per the team website. “He has to respond, see how he does and all that, but he looked really good. You couldn’t see that there was anything holding him back at this point. His confidence has got to be there, and his conditioning looked great, so I think we really have a chance. We’ll see how that goes.”

Considering Rawls has carried just 19 times for 25 yards (1.3-yard average) this season, we’d bet on Seattle easing him back in. Still, coaches talked in summer about Rawls being the identity of the running game. If he proves healthy, conditioned and confident in his rehabbed leg, he could regain the top rushing job.

Rawls is worth stashing in a non-PPR league. He wasn’t much of a receiver last year and will likely cede such work to Prosise this time around. So taking a shot on Rawls in PPR formats looks less attractive.

Floyd awoke from his season-long slumber today, hauling in 5 of 6 targets for 101 yards. Among WRs, only Larry Fitzgerald saw more targets (although he saw a whopping 18 of them). Floyd also finished 2nd among Cardinals WRs in snaps (59).

We’re still not ready to trust Floyd in starting lineups — especially for a Week 11 date with the Vikings — but he’s certainly worth a “wait-and-see” grab. We know there’s big talent here.

John Brown still doesn’t look healthy, and J.J. Nelson is better as a situational deep threat. Floyd is available in a little more than 50% of ESPN leagues.

He turned in his best outing since Week 2 in Sunday’s win in San Diego, hauling in 5 of 8 targets for 103 yards. He accounted for 42.9% of Miami’s receiving yardage in a game in which QB Ryan Tannehill attempted just 24 passes.

That low volume remains a concern for all of Miami’s pass-catchers, but Parker certainly has the talent to produce fantasy numbers if he maintains a significant role.

And several tough rushing matchups the rest of the way might make Miami throw a bit more. The Rams in Week 11, Ravens in Week 13, Cardinals in Week 14 and Jets in Week 15 all entered Week 10 ranked 10th or higher in Football Outsiders’ run-defense ratings.

Hill was the focal point of Kansas City’s Maclin-less passing game on Sunday, leading the team with 13 targets, 10 catches and 89 yards.

Most of his work came near the line of scrimmage, but we’ve seen him get deep already this season. And his 4.3 speed means he can take those short catches for long gains.

Maclin didn’t practice at all last week and certainly isn’t a lock to return for next Sunday’s game vs. the Bucs.

After that tantalizing matchup – and then 1 to avoid in Denver – the Chiefs get favorable runs against Atlanta, Oakland and Tennessee before the Broncos in Week 16.

Green hauled in 3 of 4 targets for 30 yards while playing just 12 snaps in his Steelers debut.

His role will only grow from here for an offense still searching for a 3rd amigo behind Le’Veon Bell and Antonio Brown. Green’s big-play ability on an explosive passing game could quickly give him a lofty fantasy ceiling.

His 7 catches and 76 yards in Sunday’s win over the Bears were both season highs. Brate also hit pay dirt for the 3rd straight game.

He’s averaged a solid 6 targets over the past 3 outings and has earned spot-start consideration.

Brate gets a tough Chiefs defense in Week 11 but then a Seahawks squad the following week that’s more vulnerable to TEs.

Kaepernick played well in Arizona. (That feels as strange to type as it is to read.)

He’ll be worth considering in 2-QB leagues in Week 11 against a subpar Patriots pass defense. That’s followed by 4 more games against teams ranked 15th or worse in fantasy points allowed to QBs.

One catch doesn’t give you much to count on going forward, even when that lone grab turns into a 76-yard TD. But Gabriel’s 5 targets ranked 2nd on the team in Sunday’s loss to the Eagles — 11 behind Julio Jones and 2 ahead of anyone else on the team.

It was his 2nd straight 5-target game, an involvement level that could sneak him into relevance in deeper leagues thanks to the strength of his offense.

Whose yardage projections look most interesting as the Kansas City Chiefs square off against the Tampa Bay Buccaneers? 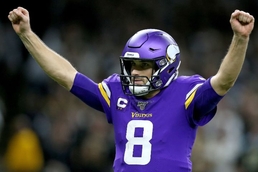