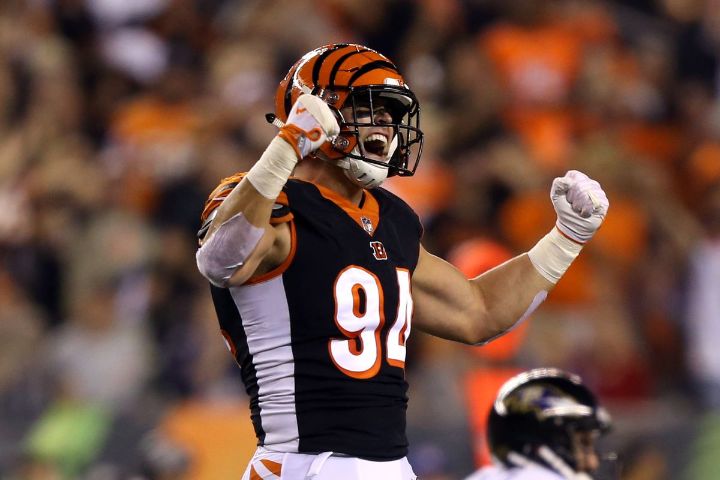 Hubbard had a quiet return from IR (elbow) in Sunday’s loss to the Steelers (1 solo tackles, 2 assists, 1 pass defensed). But he’ll get a much better matchup next Sunday at Washington. Then comes another upside matchup with the Giants -- and a shot at the Cowboys in Week 14. A healthy Hubbard is a top-20 fantasy lineman.

Griffen's playing time jumped in his 2nd game with Detroit: from 41% snap share in Week 9 to 64% against Washington on Sunday. That led Lions D-linemen for Week 10. More importantly, Griffen delivered. He notched a sack among 5 total QB hits. The matchup with Carolina in Week 11 hasn't been great for sack upside, but Griffen at starter-level playing time remains a solid IDP bet most weeks. And beyond the Carolina matchup sit better sack spots vs. Houston and Chicago.

Kirksey returned from IR Sunday to lead the Packers with 7 tackles in the win over Jacksonville. Kirksey figures to lead the playing time and tackle collection among Green Bay ILBs the rest of the way.

Kwiatkoski followed last week’s season-high 13 tackles with 8 more against the Broncos on Sunday. That led the team and marked his 2nd highest total for the season. Kwiatkoski also defensed a pair of passes, including his 1st INT of the season. His only other 2 passes defensed this season came in the Week 5 meeting with Kansas City, his Sunday-night opponent for Week 11.

Singleton and Edwards once again led Philly tackling coming out of the bye. Singleton racked up 15 in Sunday’s loss to the Giants, including 8 solos and 1 for loss. Edwards tallied 12 tackles (4 solo). In Week 8, it was Edwards leading the team with 13 tackles, including a sack. Singleton ranked 2nd at 8 tackles, adding a QB hit. Both are in play for IDP leagues of moderate depth. A matchup with run-leaning Cleveland in Week 11 shouldn’t hurt. The Browns entered Week 10 supplying the 10th-most fantasy points per game to LBs.

Avery Williamson continued to not play a significant role in Pittsburgh’s defense for Sunday’s win over the Bengals. Spillane, meanwhile, ranked 3rd on the team with 5 tackles, including a sack. Week 11 will bring the Jaguars, who entered Week 10 supplying the 5th-most fantasy points per game to LBs.

We had this rookie in last week’s Free Agent Focus, so this will be the last time we include him. Landon Collins’ replacement tied for the team lead with 8 tackles (6 solo) in Sunday’s loss at Detroit and delivered the team’s only sack. Week 11 brings an upside matchup back home with the Bengals, but Curl is shaping up as a regular IDP starter.

Thomas started Sunday in place of Josh Jones, who landed on IR with a chest injury. That should mean at least another 2 starts for Thomas, who managed 8 tackles (5 solo) in the loss to the Packers. Jones ranked 4th among DBs in total tackles heading into Week 10, which speaks to Thomas’ IDP relevance.

Jones produced a game-high 9 tackles in Sunday’s loss to the Packers, adding a forced fumble and an INT among 2 passes defensed. Jones has now defensed 8 passes in the 4 games that have seen him play meaningful snaps (66+% in each; less than 20% in the others). Jones faces Pittsburgh’s loaded WR corps in Week 11, which should keep the tackle opportunities up.

Gardner-Johnson reached 8 tackles Sunday for the 2nd time in 3 games. He enjoyed particular success as a blitzer, delivering a sack, 2 tackles for loss and 3 QB hits. CGJ isn’t usually busy in that area, but he should find plenty of opportunities otherwise over the next 3 weeks, with both Atlanta meetings sandwiching a trip to Denver. That’s 3 straight opponents among the top 8 in points per game supplied to DBs. Note: CGJ came away from Sunday's game with a yet-unspecified injury. So we'll have to track that this week.