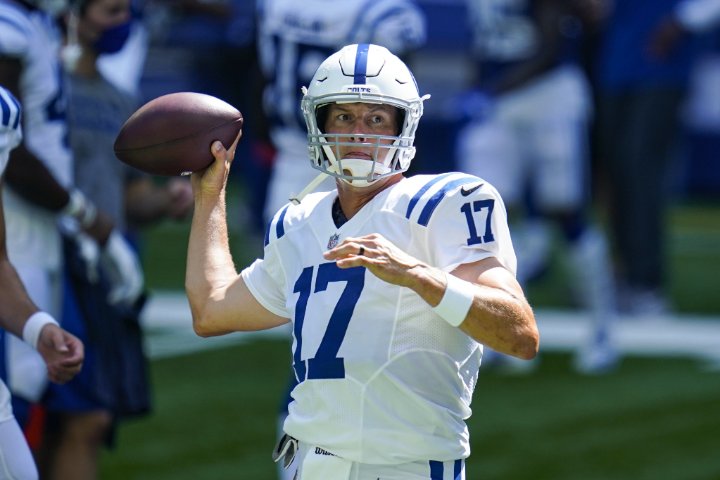 We were surprised the Saints didn’t call more designed runs for Hill against the Falcons, although he still finished with 10 carries for 51 yards and 2 scores. Just as surprising was how good Hill looked as a passer, completing 18 of 23 attempts for 233 yards.

He gets a neutral matchup vs. Denver this coming week and then a rematch with Atlanta in Week 13. If QB Drew Brees isn’t ready for Week 14, Hill will get another plus matchup vs. the Eagles.

We recommended Rivers here last week and he came through with 288 yards and 3 TDs in the win over the Packers. He has now tossed 3 scores in 3 of his last 5 games — and racked up 308 yards in 1 of the others.

Rivers will be a spot-start option the next 4 weeks vs. Tennessee, at Houston, at Las Vegas and at Houston.

Dobbins finally took over the backfield in Sunday’s loss to the Titans. He dominated playing time, handled 75% of RB carries and drew the only 2 RB targets. Dobbins delivered 85 total yards and the team’s only rushing score (from 2 yards out).

He entered Sunday owned in just less than 50% of ESPN leagues. That should skyrocket for Week 12. A Thanksgiving night matchup with Pittsburgh brings a tough spot for rushing, but it also fits Dobbins’ skill set better than those of Mark Ingram or Gus Edwards.

Matchups with Dallas, Cleveland, Jacksonville and the Giants look better on the other side.

Hyde looked good in his return on Thursday night, carrying 14 times for 79 yards and a score. He added a pair of catches among 3 targets for 16 yards.

HC Pete Carroll expects RB Chris Carson back for Week 12, but Carroll has been over-optimistic about Carson’s status all along. Hyde is worth stashing in case Carson remains out and will be a worthy handcuff (where possible) even after Carson returns.

The rookie followed up his 100-yard game last week with a 3-66-1 line against the Packers. It’s worth noting that he saw just 3 targets. But Pittman again looked like the Colts’ best receiver.

He has 4 more plus matchups on the docket vs. Tennessee, at Houston, at Las Vegas and at Houston. Pittman remains available in 75% of ESPN leagues.

Lazard was eased back in Sunday, as expected, catching just 2 balls for 18 yards. We’re still expecting him to re-emerge as Aaron Rodgers’ #2 WR, though — or at least battle Marquez Valdes-Scantling for that role on a regular basis. Lazard racked up 13 catches, 254 yards and 2 scores over the first 3 games of the season.

If JuJu Smith-Schuster’s toe injury costs him time, Washington will be elevated into a top-3 role in a pass-heavy Steelers offense. Thanksgiving night brings a tough Ravens defense. But Washington, Buffalo and Cincinnati the next 3 weeks will be fine spots.

He popped back up at New Orleans with 7 catches on a team-high 12 targets for 58 yards, taking advantage of Julio Jones’ hamstring trouble. Gage will be worth considering as a WR3 if Jones misses more time. Week 12 holds a favorable matchup with Las Vegas.

He’ll take over as Cincinnati’s starter with Joe Burrow likely done for the year. Finley made 3 starts last year and totaled just 474 passing yards and 2 scores. But he ran for 77 yards and will be working in a better offense with a better WR group this year. He’s worth grabbing in 2-QB and superflex leagues but won’t be a QB1 option.

Mims caught just 3 of 8 targets vs. the Chargers but tallied a team-high 71 yards. QB Joe Flacco took multiple deep shots to the rookie, who now has 7+ targets in 3 of 4 games. Mims still has plus matchups left vs. the Raiders (Week 13), Seahawks (Week 14) and Browns (Week 16)

Byrd has been a full-time player all year and finally had a productive game Sunday, catching 6 of 7 targets for 132 yards and a score. For those desperate for WR help, it's possible he posts a solid game or 2 down the stretch.