Let me start this week by admitting something …

I truly don’t know what to do with Seahawks LB Cody Barton.

Seattle’s past 2 games made it clear that when he’s on the field in a starter-level role, Barton should be in our fantasy lineups. After 4 straight games of 63% playing time or less – 51% or less in 3 of those – he has rebounded to 80% and 73% the past 2 games. And the 4th-year player racked up 9 and 12 tackles in those contests. He has defensed passes in 3 of his past 4 appearances and delivered his 2nd sack of the year in Week 8 against the Giants.

But Barton’s playing time has coincided almost identically with the overall performance of the Seattle defense … and not in a good way.

Check out this comparison of the Seahawks’ weekly team-defense DVOA (from Football Outsiders) vs. Barton’s weekly snap shares. (For context: The more negative the DVOA rating, the better the defensive performance. More positive = worse performance.) 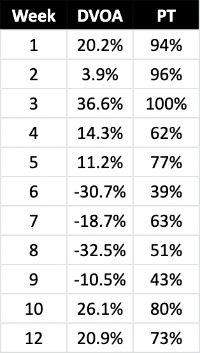 Am I saying that Barton’s playing time is wholly responsible for the rise and fall of the defense? Of course not. If 1 player were draining defensive performance that much, then even Pete Carroll couldn’t keep standing by him. (I think.)

But when Barton has come off the field, it hasn’t been in favor of another off-ball LB. It has signaled varied formations. Slot CB Coby Bryant has seen the biggest playing-time correlation with Barton’s trends: playing less the past 2 games and more in the 4 contests prior.

It seems pretty clear from the table above that the more-Barton alignment has not given Seattle its best defense. And yet, the team swung back to it for the past 2 games (both losses).

So it sure seems like the Seahawks should stop playing Barton so much. And even the past 2 games haven’t seen him get back to the full time role he played to open the year (94% or more in the 1st 3 games). But I can’t say for sure what Seattle will do.

Indeed, Seahawks coaches said Friday that Barton's playing time might vary game to game, depending on plan and game flow. According to that Seattle Times report, the initial plan was for more 3-safety sets that plied Jamal Adams like a LB. Adams, of course, went down for the season in Week 1. And Josh Jones disappointed as a fill-in, working his way almost totally out of the picture (10 snaps each of the past 2 weeks).

Carroll says that Barton has improved throughout the season, so the LB might be fairly safe the next 2 weeks vs. a garbage Rams offense and the run-heavy Panthers.

We’ll see what those 2 games look like ahead of a Week 15 rematch with the 49ers, who look quite different than they did back in Week 2.

Now on to the rest of this week's targets.

Remember, I make these waiver-wire recommendations with a variety of league formats in mind. Make sure to check your Free Agent Finder for the best available options in your specific league.

I mentioned JOK in this space last week, but he’s worth 1 more inclusion after leading Browns LBs once again Sunday. It wasn’t a big game, but Owusu-Koramoah’s 8 tackles and 6 solos (including 1 for loss) both paced all Browns, and he reached 95% playing time for the 2nd straight game.

Week 13 finds him facing a Houston offense that has been 2nd most friendly to LB scoring by our adjusted fantasy points allowed this season.

Jones delivered 11 tackles in Sunday’s loss to the Chiefs – just 1 short of his season high and his 3rd game among the past 4 with 6 solos. He also notched his 1st QB hit of the year, but that doesn’t look like an area we should scout for upside. According to Pro Football Focus, that was Jones’ 2nd straight game with a pressure. But he as just 3 for the season and has averaged just 1.5 pass rushes per week.

Jones also hasn’t seen a playing-time bump to explain his recent tackle boost. In fact, the 11 tackles and his 8 stops at Tampa in Week 8 came with 2 of his smallest snap shares of the season.

What has increased, though, has been the Rams’ total time on defense. The past 4 games have seen the team average 71.3 defensive snaps, vs. 57.9 over the previous 7 contests. The shift has been even starker if you remove the season’s 1st 3 games.

With nothing going right for the Rams offense and QB Matthew Stafford out indefinitely, it seems not a bad idea to bet on the Rams’ D – and Jones – staying busy.

Jacksonville dumped struggling rookie LB Devin Lloyd from the starting lineup for Sunday’s win over the Ravens and gave this rookie 100% playing time. Muma responded with 9 tackles (though just 4 solos). Lloyd’s role found him delivering big tackle production early in the season. If Muma sticks, there’s no reason he can’t provide some value.

The biggest question here, of course, is how Jacksonville uses the 2 highly drafted rookies going forward. (Lloyd arrived late in Round 1; Muma early in Round 3.) HC Doug Pederson said Friday that it might help Lloyd “coming out of the game and seeing it from the sidelines.”

I’d bet against them simply benching the 1st-round pick for the rest of the year. Let’s see what Week 13 looks like before projecting beyond that.

Thanksgiving Day supplied Smith’s best stat line as a Giant by far: 10 tackles, including 7 solos and 1 for loss. More importantly, though, Smith has finally had 2 straight games of usable playing time. He spent a season-high 91% of the snaps on the field in the loss to Dallas. That followed 87% playing time (though just 5 tackles, 1 solo) vs. Detroit.

Smith and the Giants now get 2 matchups with the run-heavy Commanders among the next 3 games. Washington has been the 9th most friendly scoring matchup for LBs to date. If his playing time stays up, then Smith also gets a high-ceiling matchup with the Colts in Week 17.

Most of the weekly picks for this article focus on guys who can help you immediately. Rodriguez is more of a longer-term stash if you have enough room for such a player at LB.

For the 1st time this season, Rodriguez didn’t start Thursday against the Bills. But he did move back ahead of Derrick Barnes in playing time. That still found him playing just 49% of the defensive snaps, but it improved over the 36% of Week 11.

If Rodriguez continues to climb in that category, he could deliver value by the fantasy playoffs. Our adjusted fantasy points allowed say Detroit sports the league’s 2nd most favorable schedule LB-scoring schedule over weeks 15-17.

Baltimore has designated the starting safety to return from IR, and he returned to practice last week for the 1st time since dislocating his left wrist in Week 5. Williams wasn’t active for Sunday’s loss at Jacksonville but is worth grabbing before he does get back into the lineup.

The big-money free-agent signing opened his 1st Ravens campaign with a pair of monster games – a combined 22 tackles and 3 INTs – and defensed at least 1 pass in each of the 1st 4. If he makes it back for this week’s home date with Denver, Williams will be find the league’s 5th most friendly scoring matchup for DBs – and a favorable remaining schedule overall.

Forrest racked up 11 tackles in Sunday’s win over the Falcons, a season high and 5 more than he’d posted in any game since Week 2. So we should expect that number to come back down. But it also marked the 3rd straight game in which Forrest started and played every snap. He grabbed INTs in the 2 games before Week 12, giving him 3 straight top-30 finishes – including 2 among the top 12 DBs.

LB Cole Holcomb landed on IR ahead of Sunday’s game, which should help continue the 3-safety alignment for Washington. Forrest’s next 2 games come against a Giants offense that has been negative for DB scoring overall. But they’ve supplied solo tackles at a rate above the league median. So it looks more like a neutral spot.

That said, if Forrest doesn’t work out this week, we can easily drop him ahead of Washington’s Week 14 bye.

The 2nd-round rookie has become a starter the past 4 weeks, in the wake of Chidobe Awuzie’s ACL tear. Taylor-Britt’s 1st 2 starts passed fairly quietly. The past 2, however, have delivered lines of 12 and 8 tackles – the latter coming against a Tennessee offense that hasn’t been generous with DB tackles.

This week, on the other hand, find a Chiefs offense that has supplied solos and assists to DBs at rates above the league median. Only 2 offenses have been more generous with total tackles vs. median. Week 15 holds a meeting with the pass-heavy Buccaneers, who have been generous with tackles and passes defensed for DBs. In between lies a matchup with Cleveland that we don’t really know about because of Deshaun Watson’s impending season debut.