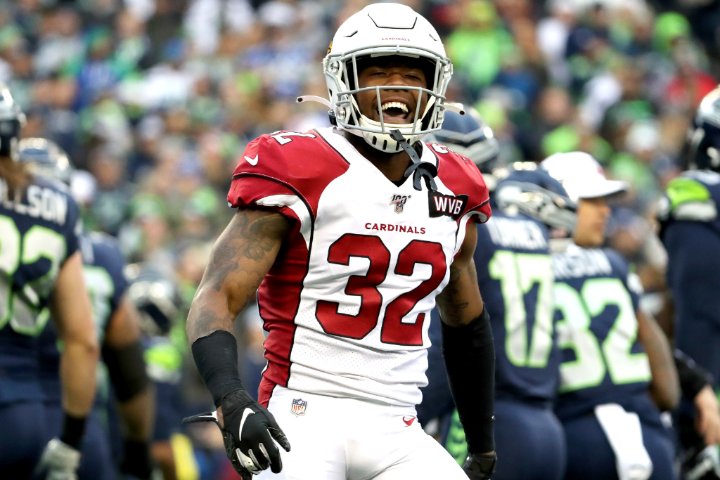 What’s up with Budda Baker?

If you drafted him and have been starting him in your IDP lineup, then you’ve probably wondered this. The guy finished each of the past 3 seasons among the top 8 fantasy DBs, including a pair of top-3 rankings (depending on your scoring format).

This year? He’s sitting just 43rd among DBs -- and an even worse 57th in points per game -- in our default scoring system.

Well, I looked into it this week, and it looks pretty simple. Baker’s performance has slipped a little, and the defense has gotten better around him.

First of all, Baker’s role has changed since his 2018 breakthrough. According to Pro Football Focus, Baker spent most of his snaps at slot CB that year, keeping him in the middle of the passing action. Add some “in the box” snaps, and you get a strong tackle profile.

Baker followed that by spending 2019 and 2020 with near-even splits in playing time between deep safety and slot/box alignments. Those 2 years also found the Cardinals playing terribly in coverage. PFF ranked Arizona 31st in coverage in 2019 and 24th last season.

This year, Arizona is up to 8th. And Baker is spending a larger percentage of his time in deep coverage. That position naturally presents fewer tackle opportunities in general, and improved play by the defense can only further hinder the opportunities reaching the deep man.

Baker ranked 2nd among Cardinals in pass-play tackles in 2018. He led that category in both 2019 and 2020. This season, Baker sits just 6th on the team in that category to date, with S Jalen Thompson, both starting ILBs and 2 corners ahead of him.

Big plays can produce especially big swings in the fantasy rankings at DB, but there’s no reason to expect a huge rebound in Baker’s scoring the rest of the way. His remaining schedule doesn’t look especially friendly to DB scoring. The Week 17 trip to Dallas might be the best spot or opportunity upside.

And yes, you can consider Baker droppable for a better-producing DB.

The Vikings have a lot going on in a defense dealing with myriad injuries.

Saturday found the team downgrading LB Eric Kendricks from questionable to out with his biceps injury. That should mean full playing time for LB Nick Vigil, whether LB Anthony Barr plays or not. (He’s questionable with knee and hamstring injuries.) Vigil now sits high in our Week 13 IDP rankings, and I picked him up Saturday in 1 league to start him.

At DEm D.J. Wonnum played a season-high 61 snaps in last Sunday's loss to the 49ers. He has played 90%, 90% and 87% the past 3 weeks. Against San Francisco, Wonnum notched his 1st sack since Week 5, but he has just 6 total QB hits through 11 games. Week 5 against Detroit stands as the only time all year Wonnum has notched more than 1 hit in a game.

Detroit has since gotten healthier up front, with LT Taylor Decker returning from IR and pushing 1st-round rookie Penei Sewell over to RT. That will be Wonnum’s primary matchup this week, if Sewell plays through the “questionable” tag for his shoulder injury. That situation adds some upside to Wonnum, but the 2nd-year man has played too poorly this year to be attractive as an IDP option.

DT Sheldon Richardson served as the primary right DE in Week 12 for Minnesota, which has seen its edge group decimated by injuries and Everson Griffen’s off-field trouble. Perhaps facing a run-favoring 49ers offense helped motivate that move, but this week brings a Detroit offense that would also like to keep it on the ground. Richardson doesn’t have an easy individual matchup with Decker, but he has moved up my DL rankings this week.

Rookie LB Jeremiah Owusu-Koramoah returned to the starting lineup Sunday night against the Ravens and matched Anthony Walker at 84% playing time. He had played just 29% and 31% the previous 2 games since returning from IR. JOK delivered, too, posting a season-high 12 tackles and a half-sack. Owusu-Koramoah matched his season-high with 6 pass-rushing chances, according to PFF, and doubled his season total with 3 total pressures. After the bye comes a rematch with those Ravens. Expect to find JOK projected in starter territory for our Week 14 IDP rankings.

LB Quincy Williams left last week’s game with a calf injury that now has him questionable for Sunday’s game against the Eagles. But Williams sustained that injury in the 2nd quarter and wound up returning to finish the game. He played 70% of the snaps in that contest. Williams also closed out this practice week with full Friday participation. So I’m betting he’ll play against the Eagles. That’s been a negative scoring matchup for LBs, but Williams has posted 2 good fantasy outings since reclaiming the starting job that Jarrad Davis had swiped. Williams’ 6 starts this year have produced a top-6 scoring average for the position.

The Texans are expected to activate LB Christian Kirksey ahead of Sunday’s clash with the Colts. He missed the past 3 contests after surgery for a broken left thumb. Kirksey should reassume his starting gig, with Zach Cunningham likely to fall back out of the lineup. Cunningham, of course, opened the year as a full-time player and contender for the league tackle lead. (He led the NFL in total and solo tackles last season.) But Cunningham spent 3 weeks in a reserve role before Kirksey’s departure opened the starting door and supplied 100% snap share the past 3 games. At full health, Kirksey and Kamu Grugier-Hill had become the LB leaders.

DE Trey Hendrickson played just 40% of the snaps in yesterday's win over Pittsburgh, tying his smallest snap share and total of the year. Joe Goodberry pointed out on Twitter early in the week that Hendrickson has gone from averaging 17.6 run-defense snaps over the 1st 5 games to just 11 per game since. The shift was even more pronounced last week, when Cincinnati put 3 DTs on the field at times with DE Sam Hubbard. We’ll see what Hendrickson’s playing time looks like going forward. He’ll be a sack-or-bust fantasy prospect either way, though. It’s been 9 games of “sack” vs. just 2 “bust” so far.

The Colts expect DT DeForest Buckner to play through the “questionable” tag on his injured knee Sunday against Houston. Buckner played through the issue for most of last week’s impressive performance against a tough Tampa Bay O-line. So he’d be in my lineup against the Texans, assuming he’s active, of course. Buckner already delivered a sack among 2 tackles for loss in this year’s 1st meeting with Houston.

The Colts are also expected to activate S Khari Willis from IR (calf) ahead of the Houston game. That would likely push George Odum back out of the starting lineup. S Andrew Sendejo (calf) is questionable for the game, though.

Devin White entered last week’s game questionable with a quad injury -- just as he is this week -- and made it through just 51% of the defensive snaps. The issue doesn’t seem to be bothering him as much this time around, though. Last week, White sat out Wednesday before limited workouts Thursday and Friday. HC Bruce Arians called him a game-time decision against the Colts. This week, White followed a limited Wednesday with 2 full practices. He should be good to go against Atlanta.

LB Deion Jones appears back near full strength on the other side of Sunday’s matchup. He missed last week’s game with a late-week shoulder injury but put in full practices all this week and carries no injury status into the Week 13 game.

The Jags will go without CB Shaq Griffin for the 2nd straight game, because of a concussion. Nevin Lawson has played in his place, without much fantasy production.

S Eric Rowe led all Dolphins defenders with 91% snap share in last week’s lopsided win over the Panthers. He was filling in for S Brandon Jones, who is questionable again this week. Like last week, Jones put in 3 limited practices, so we’ll have to see about his status Sunday morning. Rookie edge rusher Jaelan Phillips is also questionable against the Giants, coming off his 3-sack explosion. He’ll be tough to sit in many places if his hip is OK for this week.

DE Haason Reddick played easily his smallest snap share of the season (62%) in last week’s loss to the Dolphins. A damaging 3rd-quarter taunting penalty that extended what should have been a halted Miami drive might have factored into that. Reddick has been excellent for Carolina since arriving on a 1-year deal, though, and is considered a team leader. No other Panthers edge player saw a noticeable spike in playing time. So this doesn’t look like anything to be concerned about.

We’re still waiting to see how the Titans non-edge LBs get sorted once they’re all healthy. David Long and Rashaan Evans missed the Week 12 loss to the Patriots. Rookie Monty Rice joined them on the injured list, leaving after just 19 snaps with an ankle injury. We’ll see about the injury picture coming out of the Week 13 bye. Jayon Brown is my comfiest bet among the group going forward, though.

He's been questionable (ribs) every game since Week 7, so perhaps the recent playing-time rise indicates Bentley is getting healthier. This week’s matchup with the pass-heavy Bills could mean less playing time for the thumper, though. Unfortunately, we can’t really glean anything from last season’s usage. Bentley left the 1st meeting with an injury and missed the 2nd.

Rookie EDGE Azeez Ojulari played a season-high 90% of the snaps in last week’s win over Philly, his 4th straight game of 78+%. He has 0 QB hits in that span, however, following a 4-hit (2.5-sack) performance against Carolina. Ojulari looks interesting beyond this season but doesn’t appear ready to help our 2021 IDP lineups.

LB Alex Singleton has played his 2 largest snap shares of the season the past 2 weeks -- 89% and 95% -- with Davion Taylor out (knee). Singleton delivered a team-high 12 tackles in last week’s loss to the Giants, including 3 tackles for loss. He’s a strong IDP play this week against the Jets and a solid-to-good bet for tackles for as long as he’s in the lineup.

LB Drue Tranquill played 82% of the snaps in Sunday's loss at Denver, his largest share since Week 4. He edged Kyzir White by 1 snap (51-50). LB Kenneth Murray sank to 15% playing time. The former 1st-round pick is not even a must-hold in dynasty formats.

Rookie LB Baron Browning got 100% playing time in the win over the Chargers, coming out of the Week 11 bye (and off a back injury). Browning has now played every snap in each of the past 2 games that he didn’t enter questionable with that back issue (1 week in between).

EDGE Bradley Chubb played 42% in his return from ankle surgery. He'd been out since Week 2.

LB Krys Barnes led the Packers with 9 tackles in Sunday's win over the Rams but played only 61% of the snaps. That was up slightly vs. the previous 2 games (53%, 43%) but in line with his usual role.

LB Troy Reeder played 77% of the snaps in last week’s loss to the Packers, edging rookie Ernest Jones (72%) coming out of their Week 11 bye. That makes 5 straight games of 60+% playing time for Reeder, including 3 straight of more than 75%. He delivered 11 and 13 tackles in his past 2 outings.

LB Joe Schobert topped 90% snap share for the 2nd time in 3 games Sunday against the Bengals. He delivered 11 and 13 tackles in those contests. He has now reached 95% 4 times in 11 games.