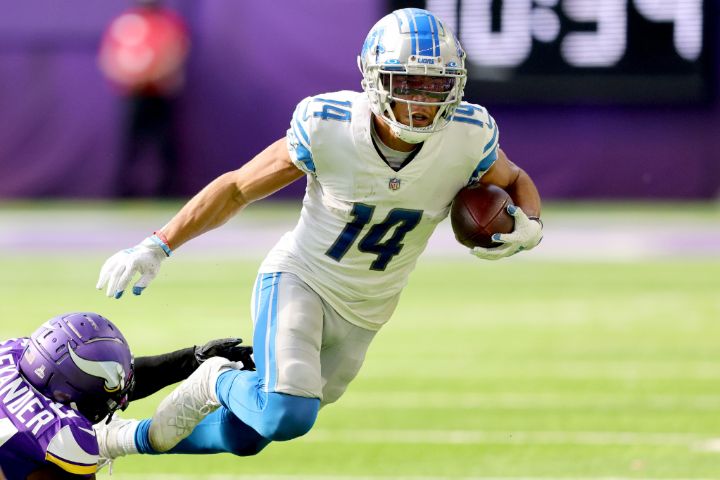 His 235-1-0 passing line Sunday wasn’t great for fantasy owners. But Garoppolo played well again, completing 78% of his passes and averaging 10.2 yards per attempt. He’ll be back on the spot-start radar for Thursday night’s plus matchup vs. the Titans.

Lamar Jackson’s ankle reportedly felt much better over the weekend, but he's not a lock to return for this Sunday’s game vs. the Bengals. If he remains out, Huntley would be an intriguing fantasy option. He had a massive outing in Sunday’s loss to Green Bay, throwing for 215 yards and 2 TDs and running for 73 yards and 2 more scores.

We'll see if RB Leonard Fournette can make it back from his hamstring injury in time for Sunday's game vs. the Panthers. If not, it'll be Jones as Tampa's clear lead ball-carrier. It's worth noting that he lost some passing-down snaps to RB Ke'Shawn Vaughn in Sunday night's loss to the Saints, so Jones wouldn't get the full Fournette role. But he'd still be at least an RB2 with upside for Week 16. And Week 17 brings a matchup with the Jets.

Wilson had his best outing of the season Sunday, ripping off 110 yards and a score on 21 carries. The matchup vs. Atlanta certainly helped, but Wilson now has 19, 13 and 21 carries in 3 spot starts this season. That volume will make him a viable fantasy play on Thursday night vs. Tennessee if RB Elijah Mitchell (knee, concussion) remains out.

We’ll see if Joe Mixon’s ankle injury will cost him further time. If it does, Perine will step in as Cincinnati’s lead back. Week 16 brings a negative matchup vs. Baltimore, but Perine would at least be a volume-based RB3 or flex play.

Guess it’s time to take this guy seriously. Reynolds racked up 112 yards on 26 carries in Sunday’s shocking win over the Cardinals. We’ll see about the statuses of Jamaal Williams (COVID list) and D’Andre Swift (shoulder) heading into Week 16. But Reynolds is worth a stash if there’s any lack of clarity as the practice week begins.

With Myles Gaskin just a few days removed from the COVID list, Johnson operated as Miami’s lead back Sunday. And he capitalized in a big way, racking up 107 yards and 2 scores on 22 carries. It was the Jets, so grain of salt. And Gaskin should be ready for a bigger role in Week 16. But Johnson likely earned himself a role going forward with this performance. You probably won’t want to trust him in a tough Week 16 matchup vs. the Saints, but he might be in play vs. the Titans in Week 17.

Austin Ekeler’s ankle should be healthier for Week 16, so we’d expect him to be closer to his usual role. But Jackson is a nice stash in case Ekeler has a setback. Jackson looked good in an expanded role in Thursday night’s loss to the Chiefs, taking 13 carries for 86 yards and catching his only target for 13 yards.

Kirk led all Cardinals with 12 targets, 9 catches, 94 yards and the team’s lone TD in Sunday’s shocking loss to the Lions. He accounted for 24% of the team’s total pass attempts in the 1st game since DeAndre Hopkins’ season-ending injury. Kirk hit the weekend rostered in 61.6% of ESPN leagues, so he’s likely occupied in most places. But he looks like the best bet to lead the team in targets over the final few weeks. So that rostered rate should be close to 100%, across fantasy formats.

St. Brown’s role Sunday wasn’t surprising. It marked the 3rd straight game in which he drew 11+ targets. He turned those 11 looks into an 8-90-1 receiving line in the shocking win over Arizona. What’s more surprising is that the Detroit rookie remained available in 76% of ESPN leagues as of Sunday. He should be owned in any competitive PPR league heading into Week 16.

We highlighted Davis here last week – and he delivered with a big 5-85-2 line in Sunday’s win over the Panthers. Davis’ 7 targets were tied for 2nd on the team with Stefon Diggs, behind only Cole Beasley’s 8. Davis is at least an upside WR3 for as long as Emmanuel Sanders is out with his knee injury.

At a 44% rostered rate in ESPN leagues as of Sunday – which was up significantly vs. the week before – Green is more widely available than teammate Christian Kirk. He fell short of Kirk’s production at Detroit on Sunday, but Green’s 8 targets set him inside the team-leading cluster. He caught 4 balls for 64 yards in that one. More importantly, he gets a better individual coverage matchup than Kirk in next week’s game against the Colts and faces potential shootout conditions in a Week 17 clash with the Cowboys.

MVS tied for the team lead with 7 targets in Sunday’s win over the Ravens, catching 5 for a team-high 98 yards and a TD. That marked his 3rd game among the past 4 with 7+ looks. His role plus upside matchups with Cleveland and Minnesota should have Valdes-Scantling in the WR3 mix the next 2 weeks.

Treadwell led Jacksonville with 9 targets and 6 catches in Sunday’s loss to the Texans. That followed 3 straight 4-catch games. Treadwell will be in the WR4 mix for a plus Week 16 matchup with the Jets.

Crowder led the Jets across the board with 8 targets and 5 catches for 40 yards in Sunday’s loss to Miami. Zach Wilson remained shaky, but you can’t complain about the volume for Crowder. He’s now hit 6+ targets in all but 1 game this season. The Jets — missing Elijah Moore and Corey Davis — face the lowly Jags in Week 16. Crowder will carry some WR3 appeal in PPR setups.

Chris Godwin and Mike Evans' injuries left Johnson as Tampa's #1 WR in Sunday night's loss to the Saints. He finished with 4 catches on 7 targets for 41 yards. Godwin and Evans seem unlikely to be ready for Week 16. The Bucs are expected to get WR Antonio Brown back for that one, but Johnson will have a shot to be a top-3 option in Tom Brady's passing game vs. the Panthers.

He caught all 4 of his targets for a team-high 60 yards in Sunday’s loss to Houston. O’Shaughnessy is now averaging 5.3 targets over his last 4 games and draws a plus Week 16 matchup vs. the Jets.