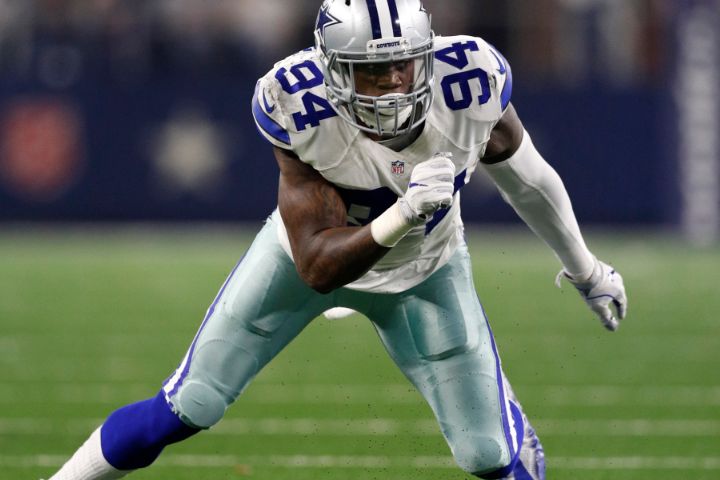 Gregory quietly racked up 10 QB hits over the 7 games leading up to Sunday. He got louder against the Eagles, delivering 1.5 sacks, 6 total tackles, 1 pass deflection and 3 forced fumbles. Another positive matchup with the Giants lies in Week 17.

Curry notched a sack among a team-high 3 QB hits in Sunday’s loss to the Cowboys, getting the start with Derek Barnett and Josh Sweat out. If either or both of them remain out for Week 17, then Curry would again be an IDP starting option for an upside matchup with Washington.

Holcomb returned from his Week 15 concussion for a team-best 11 tackles (6 solo) in Sunday’s loss to Carolina. It was his 4th straight game with 8+ tackles and 3rd in that span with a tackle for loss. He’ll finish the year with a positive matchup vs. Jalen Hurts and the Eagles.

Gay finally got starter duty for Sunday’s win over the Falcons and let the team with 9 tackles (7 solo). That included a tackle for loss, and Gay added a forced fumble. That should be enough to keep him in the Week 17 lineup, especially because K.C. secured the #1 playoff seed against Atlanta. That sets up the perfect situation to get a full-game look at their 2nd-round pick, who had only reached 50% playing time twice before Sunday and hadn’t worked past 53%. The Chargers bring a positive scoring matchup to town

A Friday hip injury kept S Jayron Kearse out of Saturday’s beatdown at the hands of the Bucs. That allowed Walker to step back into a full-time role, which found him leading Detroit with 9 tackles (6 solo). That’s what Walker tends to do when on the field. So if Kearse remains out for the Week 17 meeting with Minnesota, expect Walker to land well within starter territory in our rankings.

In his 3rd straight start Sunday, Johnson delivered a season-high 11 tackles (6 solo) in the loss to Cincinnati, trailing only LB Zach Cunningham in that category. It was Johnson’s 4th straight game with at least 6 total tackles and 5 solos; 3rd game in that span with 6+ solos. Week 17 should find him busy again, with the league’s #3 offense in Football Outsiders DVOA.

Sneed followed a strong game against the Saints in Week 15 -- 3 tackles, 1 sack, 1 INT, 3 passes defensed -- with another good outing vs. the Falcons. The rookie tallied 7 tackles (6 solo), 1 sack and 2 total QB hits. Next comes a home date with the Chargers, who have provided an upside scoring matchup to DBs all year. The Chiefs have nothing to play for after locking up the #1 playoff seen Sunday, but we doubt Sneed would be in line to sit. He’s the 3rd corner and had topped 73% playing time just once since Week 2 entering Sunday’s game.

Epps made his 2nd straight start Sunday against the Cowboys and produced his 2nd straight 7-tackle stat line. His 6 solos (plus an assist) followed 7 solos, an INT and a 2nd pass defensed at Arizona the week before. A Week 17 clash with Washington will present more upside if QB Dwayne Haskins starts. Epps could still be an option even with Alex Smith back, though (which seems likely).