This undrafted rookie has seen his playing time rise over the past 3 weeks. Jones reached the 40% range in snap share just 3 times among the first 12 games, never topping 49%. He has played 56%, 63% and 59% over the past 3 contests, however. And the past 2 weeks have produced solid lines: 4 tackles (3 solo, 2 TFL) and a sack vs. Pittsburgh; 5 tackles (3 solo) and a pass deflection vs. San Francisco. Week 17 brings an upside matchup with the Dolphins, 10th friendliest to DL scoring by our adjusted fantasy points allowed entering Week 16. And if you play through Week 18, then an even better matchup with Houston awaits.

He was quieter than usual in his return Sunday, but Perryman did jump back in at MLB after losing the previous 2 games to an ankle sprain. He managed just 5 tackles, but Vegas totaled a mere 35 total as a team. Only CB Desmond Trufant (7) collected more than Perryman. Barring some setback with his ankle, Perryman should be in our IDP plans for the Week 17 visit to Indianapolis. If he got dropped in your league, grab him.

Singleton’s 8 tackles in each of the 2 games before Sunday arrived fairly quietly, each total including just 4 solos. He made more noise with 9 solos among 11 total tackles in Sunday’s beatdown of the Giants, plus an INT. That marked his 3rd pass defensed over the past 5 games. Singleton will likely sit inside the top 20 of our LB rankings for Week 17, which presents a rematch with Washington.

Speed stepped in Saturday night after Darius Leonard landed on the COVID list and led the team with 9 tackles (8 solo) in the victory over Arizona. Speed added a pass breakup as well. Leonard tested positive and is not vaccinated, so he’ll miss Week 17 as well. That will give Speed another start in a positive scoring matchup with the Raiders.

Rookie LB Ernest Jones left Sunday’s game with an ankle injury that quickly found him ruled out. If Jones misses further time, then Reeder should be in position for a stat boost. Reeder has showed us he’s not good enough to keep a starting gig, but he has also displayed the ability to rack up big stat lines when the team is forced to play him. A Week 17 start would bring a high-upside matchup with the Ravens. Reeder will be worth a speculative add.

Shaq Barrett suffered a knee injury Sunday that's likely to cost him at least the final 2 games of the regular season. That should mean continued starting duty for Tryon-Shoyinka, who was already in the lineup against the Panthers because of Jason Pierre-Paul's absence. The rookie is no lock for production and is not appropriate for all IDP formats. But he'll get an upside sack matchup with the Jets in Week 17 -- 6th-highest pressure rate allowed -- and then another with the Carolina rematch, in case you play through Week 18. 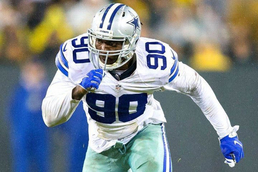