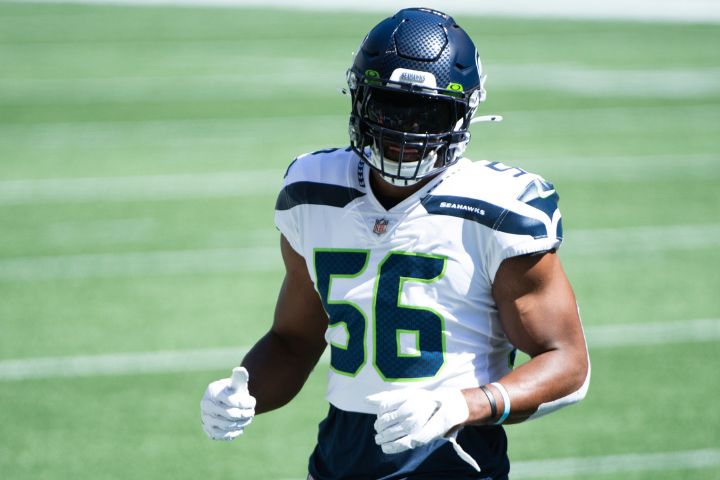 Crosby is a big enough name -- with enough production -- that he probably got drafted in most IDP leagues of decent depth. But his opening performance displayed a guy with reach even beyond that.

Crosby played 91% of the snaps in Vegas' OT win over the Ravens and tirelessly disrupted Lamar Jackson's pocket. He racked up 5 QB hits, including a pair of sacks. Meanwhile, 2019 draft classmate Clelin Ferrell (the 1st-round DE vs. Crosby's Round 4) was a healthy scratch.

Crosby checked himself into rehab for alcohol abuse this offseason, and his opening game supported the idea that be buckled down after that. Perhaps it'll wind up an overreaction, but I moved Crosby way up the Rest of the Way rankings. The wealth of options at other defensive positions makes him even more worth chasing where available.

Hargrave signed a big -- 3-year, $39 million -- free-agent deal with Philly last offseason. But then a training-camp injury kept him from ever getting on track. He drew camp buzz this summer, though, and then opened his year with 2 sacks in the dominant win at Atlanta. Hargrave looks like a starter for DT-required leagues and a potential option for deeper leagues that start multiple D-linemen.

Seattle let K.J. Wright walk this summer, even though he lingered on the open market until the Raiders added him on Sept. 2. Why? They were ready to let this former 1st-round pick take over as the #2 LB. Brooks started that run with 11 tackles in Sunday’s win over the Colts. Wright finished the past 2 seasons 32nd and 19th among fantasy LBs (depending on your scoring format). We’d take that as a potential range of outcomes for Brooks.

We got 10 tackles apiece from Littleton and Denzel Perryman against the Ravens. It was Littleton leading the group in playing time, though, at 84%. Perryman wasn't far behind, at 76%, a difference of just 5 snaps among the team's 68 total. But I'd expect K.J. Wright to keep gaining on Perryman and pass him before too long. Wright has always been the better player, and Vegas signed him to a 1-year $3.5 million deal a week after trading minimal draft capital for Perryman. I believe the ex-Panther is just a fill-in and/or placeholder.

We'll see how Wright ultimately fits within a corps that also played Nick Kwiatkoski in Week 1 and will be welcoming Nicholas Morrow back from IR at some point. But Littleton remains the guy the Raiders spent the most on. And his numbers with the Rams indicate that he carries the group's highest ceiling.

Still just 27 -- until mid-November -- Littleton has time to rebound from a poor 2020. And the fact that he opened the year leading Raiders LBs in playing time suggests the team is hopeful.

Walker led all Browns with 9 tackles and doubled his nearest teammate with 8 solos in Sunday’s narrow loss to the Chiefs. We’re betting Jeremiah Owusu-Koramoah grows his role throughout the season, but Walker looks like the Cleveland LB to bet on for now. JOK opened Sunday's game on the field with Walker

Holcomb led Washington in total (11) and solo tackles (8) in Sunday’s loss to the Chargers, while playing every snap. He even added the lone QB hurry among the team’s off-ball LBs. Jamin Davis remains the pick for long-term upside, but Holcomb looks like a guy we can tap for immediate value.

Davis checked in well behind Holcomb and Jonathan Bostic in the opener, playing just 56% of the snaps. Bostic followed Holcomb at 84%. That's a potentially usable level for deeper leagues, but Bostic figures to be the 1st guy Davis passes on the depth chart. The rookie's play will determine how soon that happens

It looked goofy in the box score -- 2 solo tackles vs. 7 assists -- but Wilson did lead the Eagles in total tackles in his 1st regular-season game since arriving this offseason. Wilson beat corps mate Alex Singleton by a mere 2 assists. More notable is that Wilson played 85% of Philly defensive snaps vs. just 60% for Singleton, who actually finished closer to #3 LB T.J. Edwards (40%) in that category. Wilson isn't likely to turn into a high-ceiling performer, but he is likely the best coverage defender among Eagles LBs. That should keep him in the playing-time lead.

Kirksey’s big downside risk is his lack of durability. He has lost 28 games to injuries over the past 3 years. But that’s a long-term issue, a reason to downgrade him at draft time. Now we’re in week-to-week mode, and Kirksey reminded us Sunday how relevant he can be when on the field. He tallied 6 tackles, 2 of those for losses, and grabbed an INT among 2 passes defensed. Next comes a Browns offense that presented a top-12 scoring matchup to LBs last season.

Anthony Barr couldn’t get past a knee injury this week that had already knocked him out for most of August. Losing Barr didn’t impact most IDP leagues, but Vigil capitalized on his playing-time boost just the way he normally does. Vigil saw full-time duty alongside Eric Kendricks against the Bengals on Sunday, delivering 10 tackles (8 solo) and a sack. Barr doesn’t look like a good bet to be ready for Week 2, so let’s try Vigil against the Cardinals. We’ll see about BArr’s return timeline.

He should have been drafted in your IDP league. (We ranked him inside the preseason top 10.) But Walker hovered in the 20s among fantasy DBs on many sites, so he might be sitting free in your setup. Walker got back Sunday to what he has continuously done when allowed to play: leading the Lions in tackles. His 7 solos paced the team by 3. And Walker added Detroit’s only sack for the game. He looks like an every-week play for the position.

If there was any concern that more playing time for 2nd-year S Xavier McKinney might hurt Ryan, Sunday assuaged that. Ryan led all Giants with 10 tackles (8 solo), adding a QB hit and forcing and recovering a fumble.

The surprising part was S Jabrill Peppers logging just 45%, apparently due to coverage struggles vs. Denver TEs. We should probably give Peppers at least 1 more game (on our benches) before dropping him in most IDP leagues. But the fact that his team simply benching him for any stretch is already an option takes a large bite out of Peppers' fantasy outlook.