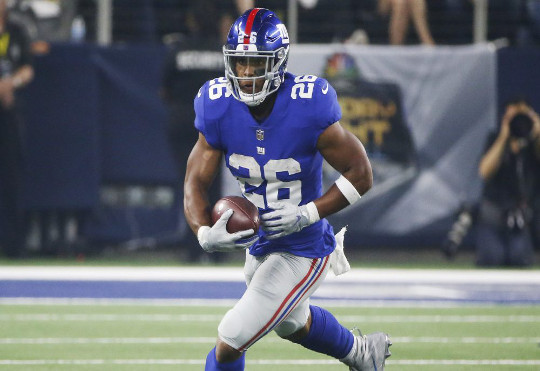 What a crazy week 2 it was. Several big-name players got injured this week, which just added on to the many that were injured in week one.

The most notable is Saquon Barkley, who I am concerned likely tore his ACL. His teammate Sterling Shepard also suffered a toe injury of unknown severity.

Christian McCaffrey, traditionally an Iron Man, suffered an ankle injury that caused him to miss the majority of the second half of the game. My initial concern was a high ankle sprain, but the video review was not very good. We should hear more over the next day or two.

Bears’ David Montgomery landed really awkwardly on his neck, but thankfully was cleared for any significant injuries and was able to return to the game.

The Rams Cam Akers suffered a rib injury, likely broken ribs early in the game and fellow running back Malcolm Brown suffered a finger injury later in the game, leading to Darrell Henderson, coming off of the hamstring injury of his own, to take over the backfield.

The Packers star wide receiver Davante Adams suffered a hamstring strain and had a sub par de as a result. With unknown severity it is unclear how long he will be out.

The Broncos suffered their fair share of injuries in week two. Quarterback Drew Lock suffered in AC sprain of his throwing shoulder that is likely going to cost him anywhere between two and six weeks depending on the severity. Courtland Sutton, coming off of a shoulder sprain of his own, returned only to leave early with a knee injury. Jerry Jeudy left temporarily with what was called a rib injury but returned shortly there after.

Colts Parris Campbell suffered a potentially serious knee injury early in the game which he was immediately ruled out for. Initial video review is concerning to me for possible MCL sprain or meniscal injury, unable to rule out ACL, but unlikely mechanism.

The San Francisco 49ers suffered likely the worst injuries of the day. Quarterback Jimmy Garoppolo suffered a high-ankle sprain that could cost him anywhere between two and four weeks. Star running back Raheem Mostert suffered a knee injury that sounds like an MCL sprain. Then they potentially lost two of their star defense of players with Nick Bosa suffering a potential season ending ACL tear, and Solomon Thomas suffered a knee injury of his own.

Will Fuller who has suffered numerous hamstring injuries in the past appeared to have re-injured his right hamstring, as he was shown being evaluated on the sideline. Fuller, who is fantastic in week one, did not record a single target war reception in week two.

The Jets Breshad Perriman who had been dealing with a meet injury suffered an ankle injury and never returned. Fellow Jets wide receiver Chris Hogan also suffered a rib as well.

The Chiefs Sammy Watkins appear to have sustained a concussion after taking a big hit. Darrell Williams suffered a ankle injury, and only accounted for one catch for 12 yards.

The Chargers quarterback going into the game was Tyrod Taylor, but he reported the reaggravated a rib injury warming up before the game and was not able to suit up. As a result rookie Justin Herbert was impressive and nearly defeated the defending champs Chiefs.

If you preferred to watch the individual videos for many of these injuries here are the links: