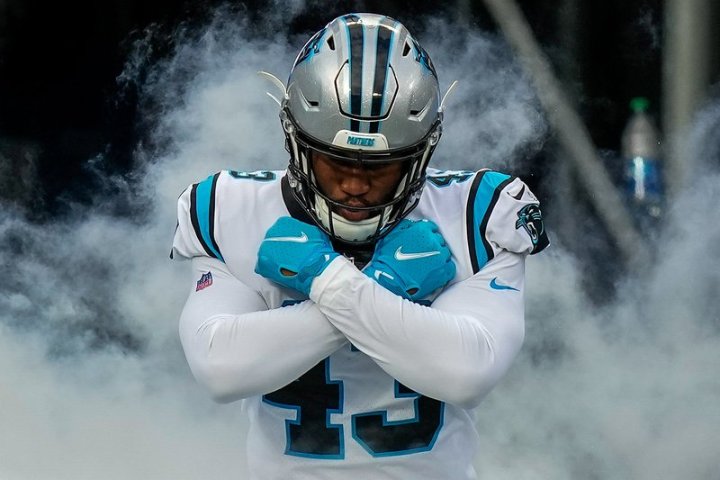 Reddick has 1.5 sacks in each of his 2 games with Carolina so far. Next comes a Thursday night shot at a Houston offense likely to find rookie Davis Mills making his 1st start. (Tyrod Taylor left Sunday’s game with a hamstring injury.)

The rookie just might have broken out in Sunday’s shutout win at Miami. After trailing just behind Jerry Hughes’ playing-time lead among Buffalo edge players in the opener, Rousseau delivered the first 2 sacks of his career against the Dolphins. Week 3 brings a home date with Washington, which has allowed just 2 sacks through 2 games. But this might just be the time to go ahead and buy Rousseau, even if you don’t plan to use him right away.

Campbell again served as the lead ILB for Green Bay in Monday night's win over the Lions, racking up 13 tackles (10 solo) and a late INT. According to the ESPN TV crew, CB Jaire Alexander -- who is in his 4th season -- called Campbell the best LB the Packers have had in his time there.

Who gets the playing time with MLB Anthony Walker out? It was Smith in Sunday’s win over the Texans (95%). He led Cleveland with 8 total tackles -- 1 for loss -- and an INT. When Smith has landed in starting roles in the past, they have tended to include him staying on the field for passing sub packages. That should help him the next couple of weeks. Beyond that, though, expect Walker to return. Consider stashing him where possible ahead of that return.

Spillane and Ingram capitalized on opportunities in Sunday’s loss to the Raiders. Spillane stepped in for injured ILB Devin Bush to deliver 10 tackles (1 for loss). Ingram tallied a sack among 3 total QB hits in a game T.J. Watt left early with a groin injury. With Cincinnati coming to town in Week 3, Spillane, Ingram or both could be worth adding -- depending on the statuses of Bush and Watt.

Update: Spillane played 80% of the snaps, which should be enough to keep him heavily involved in the tackle collection if Bush remains out. Ingram played more than Alex Highsmith for the 2nd straight game. That makes Ingram usable whether Watt returns for Week 3 (which he might) or not.

With Randy Gregory (COVID) and Demarcus Lawrence out, Dallas shifted lead LB Micah Parsons to DE. That left LB snaps for Smith and Leighton Vander Esch, and both delivered usable stat lines. Smith led the team with 9 tackles (6 solo). Vander Esch followed with 7 (4 solo) and added a sack among 2 QB hits, but he played only 52% of the snaps compared with 76% for Smith and 72% for Keanu Neal. Obviously, LVE can put up numbers at that level of playing time. But we can't bet on consistent production when he's on the field for just half the game.

Diggs has tallied 9 and 10 total tackles in his 2 games so far this season. Now comes a Week 3 matchup with the Vikings, who have supplied more tackles to DBs than any other team to date. Diggs has yet to add any plays on the ball, but each of his past 4 seasons included at least 3 INTs. So those are coming.