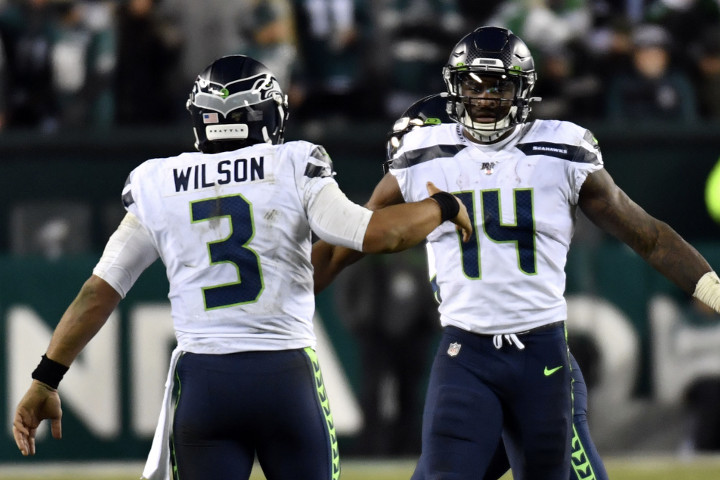 The Seahawks have been offensively dominant through 2 games and I would expect that to continue in Week 3 playing a Dallas defense that has given up 8.9 yards per pass attempt vs Jared Goff in Week 1 and Matt Ryan in Week 2. Dallas has given up a total of 59 points and Russell Wilson has a whopping 9 TDs as he leads the 2020 MVP race 2 weeks into the season.

Metcalf is a good stack option with Russell Wilson as he has seen 14 targets and has caught 8 of them for 187 yards and 2 TDs. CeeDee Lamb is another good option to stack in this game as I expect it to be high-scoring with a season-high over under of 55.5. Lamb had his first 100-yard game in Week 2 as the Cowboys looked to manufacture him touches closer to the line of scrimmage with his elite ability after the catch.

This stack is relatively expensive but should pay off in a big way as I expect fireworks in this game early and often.

Coming off a 3 rushing TD game, Dak Prescott has another dreamy matchup against a Seahawks defense that permitted 450 yards to Matt Ryan in Week 1 and 397 yards to Dak Prescott in Week 2. Somehow, the Seahawks are still 2-0 despite having one of the worst pass rushes and secondary combinations in the NFL.

Even with Dallas banged up on the offensive line, Prescott has only been sacked twice on the season and now plays against a team with a non-existent pass rush. I will be rostering Prescott a bunch in week 3 with no signs of the Dallas offense slowing down anytime soon.

This should be a back and forth affair featuring 2 efficient QBs with stud weaponry and terrible defenses. I will be looking to stack Prescott with Amari Cooper, who has quietly led the Cowboys with 26 targets (26% share) through 2 weeks.

I like playing Lockett on the other side as Lockett and Cooper are both capable of big plays, which could boost their ceilings in a projected shootout. Lockett has been on fire with Russ as they have connected on 15 of his 16 targets for 159 yards and a TD.

I like this trio as a sneaky stack with other QBs projected to take much of this week’s ownership. The Cardinals passing game stack of Kyler Murray and DeAndre Hopkins will be chalky in the same game.

Kenyan Drake offers elite leverage against the Kyler-Hopkins stack as he is always a threat to run in for multiple scores. I plan on running it back with Stafford-Jones as Patrick Peterson may be locked onto Kenny Golladay, assuming he returns to the lineup.

Many people will be completely off of the Lions as they were trounced against the Packers last week. Jones hasn’t been able to get anything going on the early season. I am looking to buy low on Jones as we know he is capable of big ceiling games.

I am going back to the well with Trubisky and Allen Robinson in Week 3 against a Falcons defense that has been trounced for 78 points in just 2 games on the season.

Playing in the dome, Trubisky should be a little more accurate and as long as he throws it near Robinson, he will most likely catch it. I’m looking to buy low on Robinson as he has been surprisingly quiet through 2 weeks and will likely come in at lower ownership because of it.

Ridley should continue to see heavy volume as Atlanta is extremely pass-heavy and Julio Jones is already banged up with a lingering hamstring injury.

The Chargers coaching staff absolutely loves Joshua Kelley as they have trusted him for 12 and 25 touches in his first 2 career NFL games.

Coming off of 25 touches against the Chiefs, Kelley has a mouth-watering matchup with the Panthers, who were dead last against the run in 2019 and have picked up right where they left off in 2020, giving up 6 rushing TDs through just 2 games.

The Chargers defense has looked excellent for most of the season as they corralled Joe Burrow and the Bengals for a total of just 13 points and then were able to slow Patrick Mahomes and the Chiefs until the 4th quarter in Week 2.

The Chargers defense has just 4 sacks through 2 games but should be able to pressure Teddy Bridgewater early and often. Bridgewater struggled last week, taking 5 sacks while throwing 2 INTs and losing a fumble.