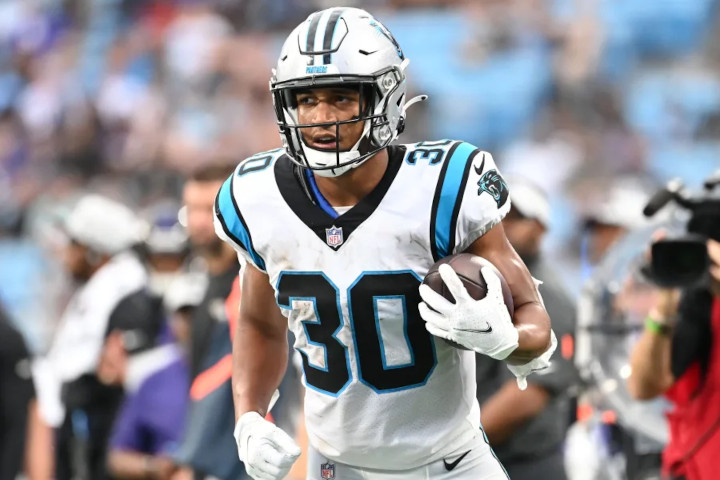 We highlighted Darnold here last week -- and he came through with a strong fantasy outing on Thursday night in Houston. Yeah, the 2 rushing TDs Darnold scored in that one are fluky. But he threw it well again, finishing 23 of 34 (68%) for 304 yards (8.9 YPA).

Losing RB Christian McCaffrey hurts, but Darnold still has plenty of weaponry in WRs D.J. Moore, Robby Anderson and Terrace Marshall. And he gets another great matchup in Week 4 vs. the Cowboys.

RB Christian McCaffrey is expected to miss the next few weeks with the hamstring injury he suffered in Thursday night’s win over the Texans. That leaves Hubbard and Freeman as Carolina’s top 2 RBs.

Usage on Thursday night suggests that Hubbard will be the clear lead back. He out-snapped Freeman 38 to 11 after McCaffrey exited, including 9 to 0 on 3rd and 4th downs. Hubbard tallied 10 carries and 5 targets to Freeman’s 5 carries and 1 target.

Hubbard is the priority add here, but Freeman is also worth stashing as we wait to see exactly what this McCaffrey-less backfield looks like. Carolina’s next 3 games: at Dallas, vs. Philadelphia, vs. Minnesota.

He was excellent in relief of RB Dalvin Cook in Sunday’s win over Seattle, carrying 26 times for 112 yards and catching 6 of 8 targets for 59 yards. It didn’t feel like Cook was too close to playing in this one, so it’s possible he misses more time. If that’s the case, Mattison will be a borderline RB1. Minnesota’s next 3 games come vs. the Browns, vs. the Lions and at the Panthers.

Watch Shark Bites for updates on Cook before determining whether to bid at the low or high end of this range.

HC Jon Gruden isn’t kidding about preferring Barber to Kenyan Drake as his lead runner sans Josh Jacobs. After out-carrying Drake 13 to 7 last week, Barber enjoyed a huge 23 to 8 edge in the overtime win over Miami. Barber parlayed that volume into 111 yards and a score. He even caught 3 of 5 targets for 31 yards. We’ll have to consider him a viable fantasy play if Jacobs misses more time.

We’d talked about Sanders’ encouraging usage over the first 2 games of the season.That usage turned into production in Week 3, with Sanders posting a big 5-94-2 line in the with over Washington.A near every-down player in the league’s fastest-paced and pass-heaviest offense, Sanders has totaled a healthy 20 targets through 3 games.

He remains available in over 75% of ESPN leagues, despite a promising start to the season. Kirk figures to draw more interest on the waiver wire after posting a 7-104 line in Week 3’s win over the Jaguars. His 8 targets tied for the team lead. With WR DeAndre Hopkins seemingly limited by his rib injury, Kirk could continue to play an expanded role in the short term.

Renfrow posted a 5-77-1 line in Sunday’s win over the Dolphins. That followed 6-70 and 5-57 lines to open the season. Renfrow has averaged 7.3 targets per game through 3 weeks. It’s past time to treat him as a viable fantasy option, especially in PPR leagues.

WRs Diontae Johnson (knee) and JuJu Smith-Schuster (ribs) are both dealing with injuries, potentially leaving Washington and Chase Claypool as Pittsburgh’s top 2 WRs. QB Ben Roethlisberger is struggling, which dings Washington’s fantasy appeal. But it remains a high-volume passing game. And Week 4 brings a plus matchup vs. the Packers.

He was quiet in his 2021 debut on Sunday, catching just 2 of 6 targets for 21 yards. Engram made it out of there without aggravating that calf injury, though. And he might play a big role in the passing game going forward with the hamstring injuries to WRs Sterling Shepard and Darius Slayton.

His route rate climbed from 62% in Week 1 to 77% in Week 2. We’ll see where it checked in this week, but Everett set season highs with 5 targets, 5 catches and 54 yards. He’s looking like a guy who could help fantasy squads that don’t have an every-week starter at TE.

We’ll mention Freiermuth again here after highlighting him last week. The rookie ran more pass routes than TE Eric Ebron in Week 2 and again looked like Pittsburgh’s lead TE vs. Cincinnati in Week 3. Freiermuth hauled in 3 of 5 targets for 22 yards and a score. His role could continue to expand, especially with the injuries to WRs Diontae Johnson and JuJu Smith-Schuster.

He didn’t play great in Buffalo on Sunday, but Heinicke produced in fantasy. He threw for 212 yards, 2 TDs and 2 INTs -- and ran for 22 yards and another score. He’ll be in play in 2-QB leagues -- and maybe as a QB1 spot-starter in deep leagues -- in Week 4 vs. a bad Falcons defense.

The 33-year-old racked up a team-high 112 yards in the win over the Jaguars. It was Green’s first 100-yard game since October 2018. He’d been inefficient over the first 2 games of the season, so we’re not totally buying into a revival. But Green is getting lots of playing time in a high-scoring offense.

Watkins tallied a 4-68 line on 7 targets in Sunday’s win over the Lions. He’s caught exactly 4 balls in each of the season’s first 3 games. That’s enough to make him a low-end option in deeper leagues -- at least until Rashod Bateman returns. Note that Baltimore has a tough Week 4 draw vs. Denver.

He hit pay dirt on Sunday for the 2nd straight week, finishing with a 4-49-1 line on 5 targets. QB Josh Allen chucked it 43 times, so it was just an 11.6% target share for Knox. But on a fast-paced, pass-heavy offense, there might be enough to go around to make Knox a spot-start option going forward.

After watching WR K.J. Osborn operate as the #3 option in Minnesota’s passing game in the first 2 games of the season, it was Conklin’s turn in Week 3. He hauled in 7 of 8 targets for 70 yards and a score in the win over Seattle. Conklin won’t be a consistent every-week producer, but not many TEs are. He’s worth grabbing in deeper leagues. This Vikings passing game looks good.