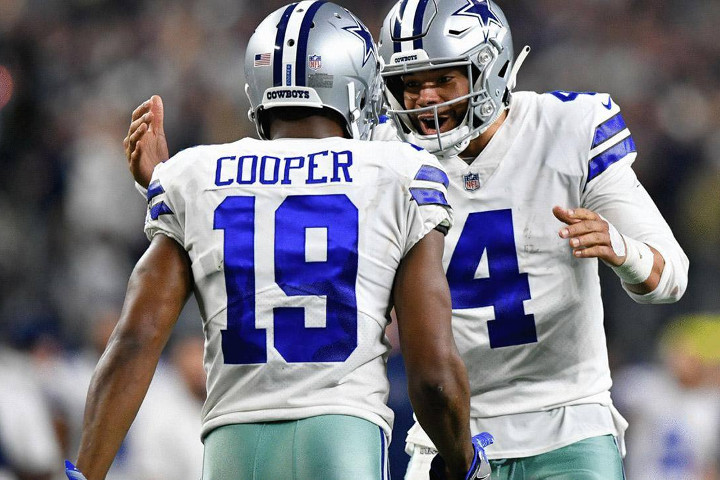 I expect the Ravens to come out like gang-busters this week as they look to avenge their embarrassing Week 3 home loss to the Chiefs on Monday Night Football.

I like this stack because Lamar Jackson has a much higher passing TD rate playing with a lead. And that obviously leads to a better chance at TDs for Mark Andrews.

As 2-TD favorites and a league-high blitz rate at almost 50%, the Ravens defense should have plenty of opportunities to for sacks and turnovers against Dwayne Haskins. Additionally, they can create short fields for the Ravens offense, which helps Jackson/Andrews’ chances of multiple TDs.

This stack will have outstanding leverage as Jackson has a FanShare ownership projection of just 5.5% with Andrews projected at 7.3% and Ravens D at 6.7%.

I’m looking to ride the hot streak here with Ryan Fitzpatrick going over 25 DK points in back to back weeks and now going up against a terrible Seattle pass defense.

The Seahawks have allowed 1,319 passing yards through 3 games against Matt Ryan, Cam Newton and Dak Prescott. With Jamal Adams expected out of the lineup and Mike Gesicki leading the Dolphins in targets and air yards, I think he is a great stacking option with Fitzmagic.

I will have plenty of different stacks in this game with certain lineups having DeVante Parker and Mike Gesicki and then lineups on the other side with D.K. Metcalf or Tyler Lockett from Seattle.

Metcalf and Lockett have been consistent all season as frontrunner MVP candidate Russell Wilson has been dialed in with 14 pass TDs through 3 games.

Somehow Josh Allen flies under the radar every single week as he is never a popular DFS option despite ranking 2nd in QB fantasy points (only behind Russell Wilson) on the year.

He should go low-owned once again this week with a FanShare projecting him at just 5.5%. With a price tag of $7.3k on DraftKings, many people will look to roster Dak Prescott or Patrick Mahomes in the same price range.

With John Brown hobbled by a calf injury, Stefon Diggs is the perfect stacking option with Josh Allen as there is simply no corner on the Raiders that can keep up with Diggs’ route running.

Diggs has had no problem building an early chemistry with Allen as his 28 targets easily lead the Bills — 8 more than Cole Beasley and 10 more than John Brown through just 3 games.

In lineups where I use Allen-Diggs, I will be running it back with Hunter Renfrow from the Raiders, who have been decimated by injury at the WR position.

The Buffalo defense is very solid, but they are vulnerable in the slot (where Renfrow runs most of his routes), giving up 7-115-1 to Jamison Crowder and 9-107-1 to Cooper Kupp.

Prescott has been a machine, with back to back top 5 QB finishes, including the overall QB1 in Week 2’s loss to Seattle. With the Dallas defense struggling and the Dallas offense electing to go up-tempo and pass heavy, it has been a fantasy dream for Prescott owners.

Quietly, Amari Cooper has been the alpha WR for Dallas, despite not having a breakout game thus far. Amari has a whopping 35 targets on the year, with Zeke Elliott #2 in targets with 23.

Cooper has always put up better numbers at home. And his matchup is enhanced by the potential absence of both starting CBs Denzel Ward and Greedy Williams.

The Dallas pass defense has been atrocious with opponents going extremely pass heavy against them (over 48 attempts per game compared to just 26 rushes).

Odell Beckham is certainly in play in game stacks, as the Browns are underdogs and are projected to throw the ball more going up against a solid rush defense but terrible pass defense. Odell leads the Browns with 22 targets and has a FanShare ownership projection of just 9%.

By playing Patrick Mahomes and Clyde Edwards-Helaire together, I am trying to capitalize on all Chiefs TDs as they routinely score over 30+ points.

This stack does offer some correlation as well, with Edwards-Helaire racking up 11 catches for 102 yards on 14 targets in his last 2 games.

Patrick Mahomes will always have the highest ceiling at the QB position along with Lamar Jackson and Russell Wilson and has a FanShare ownership projection of just 7.7%. Edwards-Helaire is a chalkier option up around 15% ownership, but this duo won’t be used in many lineups and is a great differentiator in GPPs.

In lineups where I use multiple Chiefs players, N’Keal Harry is a potential run-back option priced at just $4k on DraftKings and an ownership projection of 8%. Harry quietly has 22 targets on the season and has quickly become Cam Newton’s favorite option in the red zone.